Home / Movie Database / The Mountain Between Us 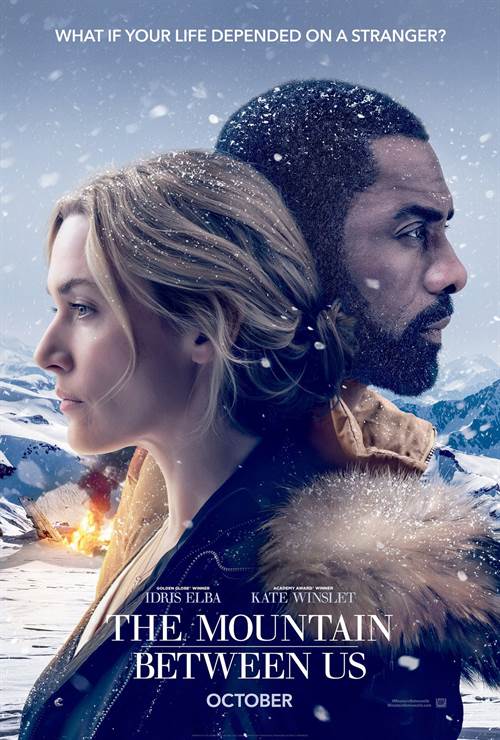 Stranded after a tragic plane crash, two strangers must forge a connection to survive the extreme elements of a remote snow covered mountain. When they realize help is not coming, they embark on a perilous journey across hundreds of miles of wilderness, pushing one another to endure and discovering strength they never knew possible. The film is directed by Academy Award nominee Hany Abu-Assad and stars Academy Award winner Kate Winslet and Golden Globe winner Idris Elba.

Purchase DVD/Blu-ray/4K UHD physical copy of The Mountain Between Us today at Amazon.com

Download The Mountain Between Us in Digital HD/4K from the iTunes store.

The Mountain Between Us images are © 20th Century Studios. All Rights Reserved.

The Mountain Between Us Theatrical Review 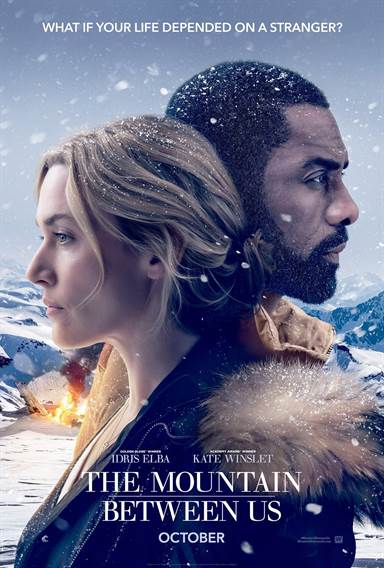 Alex (Kate Winslet; Revolutionary Road) needs to get to New York for her wedding.  Ben (Idris Elba; Prometheus) has to get home to perform brain surgery on a young boy.  When all flights are canceled because of bad weather Alex charters a small plane to Denver and offers to share it with Ben.  These two strangers take off with the pilot and things seem to be going great.  Suddenly the bad weather takes over and, if that isn't bad enough, the pilot has a stroke.  Things fall apart quickly and the two find themselves fighting for survival.

At first Alex and Ben seem to have a cordial relationship and then they may actually become friends.  Of course, as their situation becomes direr the tentative "friendship" deteriorates and they get on each other's nerves.  They then spend the next two weeks trying to find civilization and not abandoning hope of survival.  Through all this, they have a romantic moment, which is over as soon as (spoiler alert) they are rescued.  Once back to civilization they can't seem to readjust to their old lives since nobody can understand what they have been through.

The cast helps make this movie more than it would have been from the script alone.  Winslet proves once again why she deserves the Oscar she has won and Elba matches her terrifically.  For the brief time he is on screen, Bridges gives a good enough performance to be memorable.  With such talent to take advantage of it's a shame the script isn't better.  Much of the story, based on a novel by Charles Martin (The Dead Don't Dance), is almost too unbelievable to be credible and becomes groan-worthy at times.

The cinematography is exceptional with wide angle shots of a beautiful, snow-covered mountain range that gives the audience the sense of isolation Alex and Ben must be feeling.  Unfortunately, director Hany Abu- Assad (Omar) mars the flow of the movie with the occasional unnecessary close-up.  In one particular scene towards the end, he has a full frontal head shot of Winslet that is so disconcerting that it takes the viewer right out of the emotional moment.

The story is plausible enough at first and the emotions these characters go through on their physical and mental journey are believable.  However, there are so many "incidences" that get in the way of the two characters fight for survival that it becomes over the top and boring.  I can understand one or two setbacks but after a series of them throughout the movie it sort of becomes ridiculous and unintentionally comical which isn't a good thing.  The script also takes a perfectly good drama and throws in a cheesy love story that lessens the impact the movie has on its audience.

If you love Winslet or Elba or you read the book, then you should see this movie.  You should also see it for the beautiful landscape it provides which seems all at once treacherous and serene. However, if you ware hoping for an Oscar Winning drama, then you will most likely be disappointed.  The film as a lot going for it but misses the mark in the end.