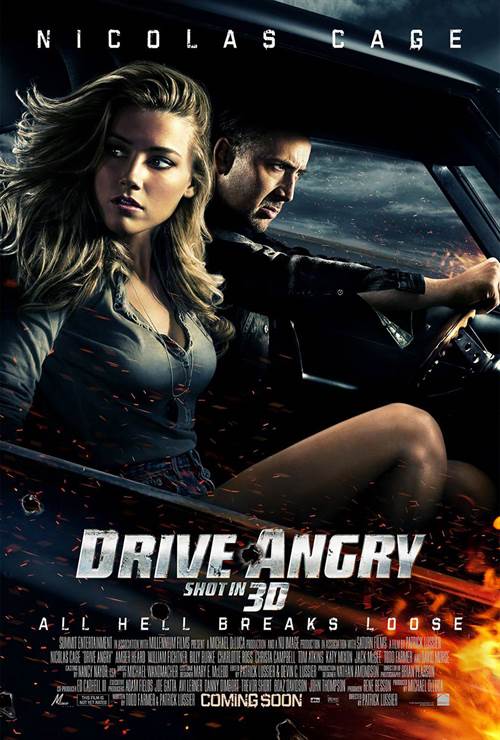 Thrown down into hell for his crimes, brutal felon Milton (Nicolas Cage) breaks out of the fiery pit after cultists murder his daughter and take her baby. Intent on rescuing his grandchild, Milton joins forces with a waitress, who gives him her ex-lover's bright red muscle car. The pair speed off in pursuit of the cult leader, who plans to sacrifice the infant and unleash hell on Earth. However, the hunters become the hunted when Satan sends his merciless henchman to drag Milton back to hell.

Stream Drive Angry in Digital HD/4K from the AppleTV store.


Actress Amber Heard to serve as Grand Marshal for the Budweiser ...  2/10/2011 2:57 PM EST
DAYTONA BEACH, Fla. - Hollywood actress Amber Heard will serve as the Grand Marshal for the 33rdannual Budweiser Shootout on Saturday night, Feb. 12 - the star-studded non-points NASCAR Sprint Cup Series event that kicks off the stock car portion of Speedweeks 2011 at Daytona International Speedway.   Heard will give the starting command "Gentlemen start your engines" as the stars of the NASCAR Sp...  More>> 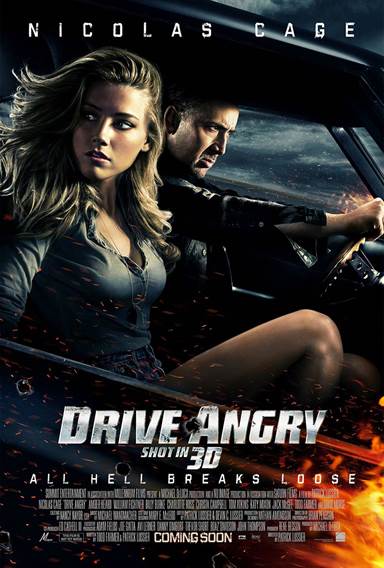 The first I heard of Drive Angry, I was attending Comic-Con 2010.  The premise seemed likely enough to be a decent film -- Milton (Nicolas Cage; The Rock) breaks out of hell to save his granddaughter and to avenge the death of his daughter.

Fast forward eight months to February 25, 2011 -- Drive Angry is released to audiences in North America who are probably not prepared for the thrill ride they are about to get…and that thrill ride is simply delightful!

Drive Angry is a gritty, no-holds-bar action thriller harkening back to the grindhouse film days of the 1970s.  There are very few roles that Nicolas Cage can actually act well, and this is most certainly one of them.  Cage plays Milton and expresses the right emotions and actions that one would expect for a character such as Milton.  However, Drive Angry does not just rest on the laurels of Cage's performance.   He is supported by an amazing cast featuring William Fichtner (Go); Amber Heard (Zombieland); and Billy Burke (Untraceable), who actually steals some scenes from Cage.  I see a lot more action movies to come for the lovely and talented Amber Heard.

Drive Angry is written and directed by Patrick Lussier (Dracula 2000, My Bloody Valentine).  Lussier is normally known for his work in the horror genre but has gone all out to give the audience a vibrant and fun movie that resonates on so many different levels.  With a body count higher than Commando, Lussier has created the ultimate shoot-em-up fest for the modern moviegoer.

Over the past year, most movies have been either filmed or post-processed into 3D to jump on the latest film-going bandwagon.  However, Drive Angry is a movie that was born to be shot and presented and 3D.  The depth created by the 3D camera adds that final punch to the film that makes you truly immersed in the world of Milton and company.  So much so, that you are left a bit dazed and confused when the film is over -- the 3D glasses are taken off, and you are thrust back into the real world.

To say that Drive Angry is a movie that everyone would enjoy would not be correct.  Make no mistake about it.  Drive Angry is very explicit in its violence, nudity, and gratuitous sexual encounters.  However, if you enter the movie already aware of that, you are in for a mindless good time to forget the world -- you will enjoy the movie to its fullest.