Any animation fan, Disney fan, or just one who likes good storytelling should definitely purchase this combo pack. 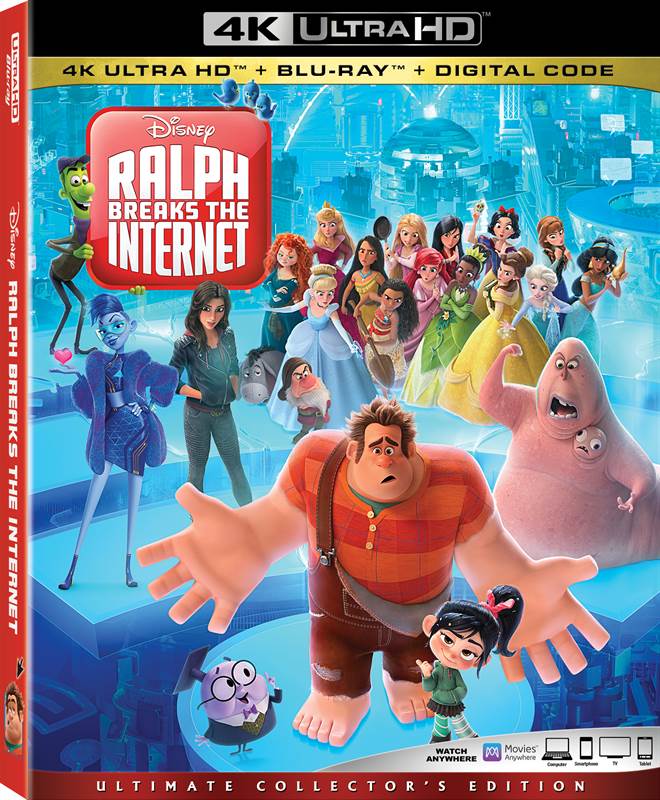 Purchase   DVD/Blu-ray/4K UHD
Back in 2012 production started on a little film called Wreck-It Ralph. There was small fanfare at that year's San Diego Comic Con, but not much. All the press really knew is it would be "Roger Rabbit" like but instead of cartoons it would be featuring video game characters and settings that everyone grew up loving. The film, which debuted in November the same year it was a smash success, and in 2018 Walt Disney Pictures unleaded its sequel, Ralph Breaks The Internet.

When the Sugar Rush video game gets broken Vanellope (Sarah Silverman; Battle of the Sexes) and Ralph (John C. Reilly; The Sisters Brothers) head to the internet to find a new part and save the game.  However what they discover is a whole, new, exciting but scary world and as they try to raise the money for the new part, Vanellope also discovers a newfound freedom that causes Ralph to hold on even tighter.  This eventually causes tension in their friendship, which forces Ralph to take drastic measures leading to disastrous results.

Remember back when animated films used to tell moral lesson aside from making us smile and laugh? Ralph Breaks The Internet harkens back to those days. I can happily say Disney is still and most likely will always be the top minds for blending these two fields.  These characters stay with you days/weeks after you leave the theater, because aside from their cute and amazing adventures, there is true heart to this story - about friendship, letting a loved one go even if it hurts you, and addressing your own insecurities. By the end of this film, my eyes were wells of water.

Ralph Breaks the Internet is encoded in  HEVC / H.265 with HDR10 and is presented in its original theatrical aspect ratio of 2.39:1. If one is a regular viewer of 4K UHD animation you might have thought this film would be just the same as all the rest. I can say happily this is far from the truth. Ralph Breaks the Internet is one of the best HDR transfers I have ever seen for animation. The color depth and white balance are jaw-dropping. Every color and every little detail pops off the screen. Comparing it side-by-side to the Blu-ray encoding it appears to almost be a completely different film. Complimenting this "demo-quality" video is a Dolby Atmos soundtrack where you truly get the benefit of its format. The world of the Internet envelopes you. From every place in your viewing area, your ears are bombarded. It is pure audio ecstasy.

Aside from the Digital HD 4K copy of the film (iTunes digital copy only plays in 1080p, but 4k on Amazon, Vudu, and Google Play). Ralph Breaks The Internet contains a modest selection of special features. Including Surfing for Easter Eggs, The Music of Ralph Breaks the Internet, BuzzzTube Cats, Deleted Scenes, Music Videos, and one more feature that is a bit longer in length, How We Broke the Internet. It is through these special features we see how the story changed through time, and well as some deeper looks on how some of the scenes where created. While I appreciate the extras, I was really hoping that they would contain a copy of the "full princess scene" from the film as I have seen a few different versions.

Without a doubt Ralph Breaks the Internet is an amazing follow-up to the original film, has a great message along with a fantastic, fun story, and if seeing this film itself in theaters wasn't enough to make you want to pick up the set, the quality and care that Disney took to create this 4K presentation should easily get you there. Any animation fan, Disney fan, or just one who likes good storytelling should definitely purchase this combo pack.

Download Ralph Breaks The Internet in Digital HD/4K from the iTunes store.

Listen to the Ralph Breaks The Internet soundtrack on Apple Music.

For more information about Ralph Breaks The Internet visit the FlickDirect Movie Database. This release has been provided to FlickDirect for review purposes. For more reviews by Nathan M Rose please click here.