Pacino is a brilliant actor and his portrayal of a Cuban immigrant in Scarface is a perfect example of his work. 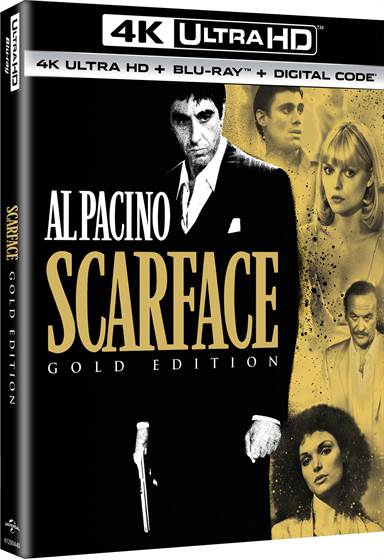 In 1932 a film about the rise and fall of a Chicago gangster named Tony (Paul Muni).  In 1983 a remake written by Oliver Stone (Natural Born Killers) and directed by Brian De Palma (The Untouchables) made its way to theaters winning critics' and audiences' praises.  It has become an iconic film that consistently shows up on "greatest movies of all times" lists and is still talked about to this day.  Its dialogue is often quoted – the mark of a truly well written film – and people count it amongst their all-time favorite movies.  Now Universal Pictures has decided to release the movie on 4K.

In 1980 Fidel Castro, the Leader of Cuba, allowed ships to come to the country and transport people out of the country.  Many of them ended up in a refugee camp in Miami including Tony Montana (Al Pacino; Scent of a Woman) and his best friend, Manny Ribera (Steven Bauer; Ray Donovan ).  In exchange for green cards, Tony and Manny agree to kill a former Cuban general who is also in the refugee camp.  Once they are free from the camp they become dishwashers but long for something better so they start working for a Miami drug dealer named Frank Lopez (Frank Loggia; Independence Day).

Frank sends Tony and one of his friends to make a drug deal with some Columbians but the deal goes bad and Tony's friend is dismembered with a chainsaw before Tony is rescued.  Over time Tony becomes a valued member of Frank's team until Frank tries to have Tony killed.  Tony kills Frank and marries Frank's wife, Elvira (Michelle Pfeiffer; Hairspray).  Three years later, Tony becomes disillusioned with his life and gets arrested on tax evasion charges. He makes a deal with Bolivian drug lords to help assassinate a journalist but backs out when it means killing the journalist's family as well.  The drug lord sends men to come after and kill Tony.

Pacino is a brilliant actor and his portrayal of a Cuban immigrant in this film is a perfect example of his work.  His accent may waiver occasionally but his angry outbursts and lack of empathy bring Tony to life in the scariest of ways.  Bauer and Loggia are also very good and Pfeiffer stands out in every scene she is in.  Mary Elizabeth Mastrantonio enhances this solid cast playing Tony's younger sister, Gina. The disturbing incarnation that Tony lusts after Gina is well played by Mastrantonio makes the viewer rather uncomfortable.

The remastered 4K version of the movie is presented in 2160p resolutions and the video quality is the best I've ever seen Scarface look.  There is practically no graininess and details are sharp.  The DTS:X audio is also wonderful with a robust effects-track enveloping the audience from all sides.  There is only one new extra, which is housed on the 4K disc, called Scarface: the 35th Anniversary Reunion.  The other extras on the Blu-ray disc were previously released,  They are The Scarface Phenomenon, The World of Tony Montana, The Rebirth, The Acting, The Creating, Deleted Scenes, Scarface: The TV Version, and The Making of Scarface: The Video Game.

While Scarface will be remembered in movie history, I didn't have as strong of a reaction as most to the film.  Pacino does an amazing job as Tony but I found nothing appealing about this man and found I wasn't invested in him at all.  I also kept wondering what the point of the movie was as the story didn't grab me.  Having said that, the De Palma, Stone, Pacino team have made an excellent and enduring film that will be taught in film classes for decades to come.

Download Scarface in Digital HD/4K from the iTunes store.

For more information about Scarface visit the FlickDirect Movie Database.