Sonic is a fun film while dealing with a variety of emotions.  This is a family-friendly movie everyone can enjoy. 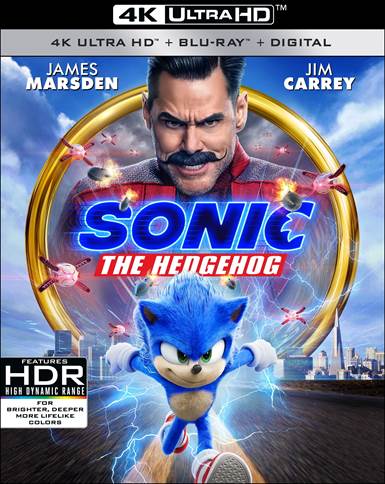 Back in 1990, Sega decided to release their answer to Super Mario Brothers with a fast, little, blue hedgehog named Sonic.  Of course, with all of the remakes and reboots coming out of Hollywood these days, it was only a matter of time before Sonic was brought to life in a live-action movie.  Originally slated to be released in late 2019, the film was reworked to make Sonic look more like the character in the video game and was in theaters this past February.  While it grossed over $300 million worldwide it received mixed reviews from critics.  Despite that, there has been talk of making a sequel but we'll have to wait and see if that ever comes to fruition.  In the meantime, fans of the film can now get it on 4K, Blu-ray, DVD, and Digital HD.

Sonic, who is cared for by his guardian, finds himself in some trouble with a tribe of echidnas and must use the power of his rings to transport himself to a safe place. He uses one to travel to Earth, where he enjoys a long stay. He now lives in Green Hills, Montana, safe, but lonely. During a bout of loneliness, Sonic  plays baseball alone and accidentally sends himself into supersonic speed. This triggered an electromagnetic pulse, knocking out power throughout the Pacific Northwest. To get to the bottom of this "mystery", the  United States Department of Defense ask the genius Doctor Robotnik. He soon discovers Sonic and tracks his whereabouts - the shed of local townfolk Tom and Maddie Wachowski. After discovering Sonic in his shed, Tom accidentally shoots him with a tranquilizer dart, triggering another portal jump to San Francisco. While the pair hideout from Dr. Robotnik they come to know each other and form the friendship that Sonic has been craving. Now, they must figure out how to fight Robotnik and keep both of themselves safe.

While Schwartz makes Sonic relatable as he runs (pun intended) the gamut of emotions, Carrey plays an amped-up version of Ace Ventura and Marsden portrays the Tom as the thoughtful, nice guy, which we have seen from him before.  Sumpter does perfectly fine but honestly, Natasha Rothwell as Maddie's sister steals every scene she is in.

The 4k disc's 2160p resolution offers excellent video quality.  Every piece of fur on Sonics body can be individually seen and the colors are sharp and clean.  Occasionally, some of the CGI looks a little fake but for the most part, it blends well.  The Dolby Atmos is a treasure as surrounding noises envelope the audience  while the dialogue is housed clearly in the center channel.  The combo pack includes the following Special Features:

For someone who grew up playing and loving the game, I was skeptical about a live-action movie.  I was further concerned when the release was delayed due to the outcry of Sonic's appearance.  However, I was pleasantly surprised by the outcome as Sonic is a fun film while dealing with a variety of emotions.  This is a family-friendly movie everyone can enjoy.

Purchase a DVD/Blu-ray/4K UHD physical copy of Sonic The Hedgehog today at Amazon.com

Download Sonic The Hedgehog in Digital HD/4K from the iTunes store.

Listen to the Sonic The Hedgehog soundtrack on Apple Music.

For more information about Sonic The Hedgehog visit the FlickDirect Movie Database. This release has been provided to FlickDirect for review purposes. For more reviews by Maureen Buccellato please click here.