The movie pays homage to the game that will have fans reminiscing about their childhoods while offers enough pop culture and modern technological touches to entice younger generations. 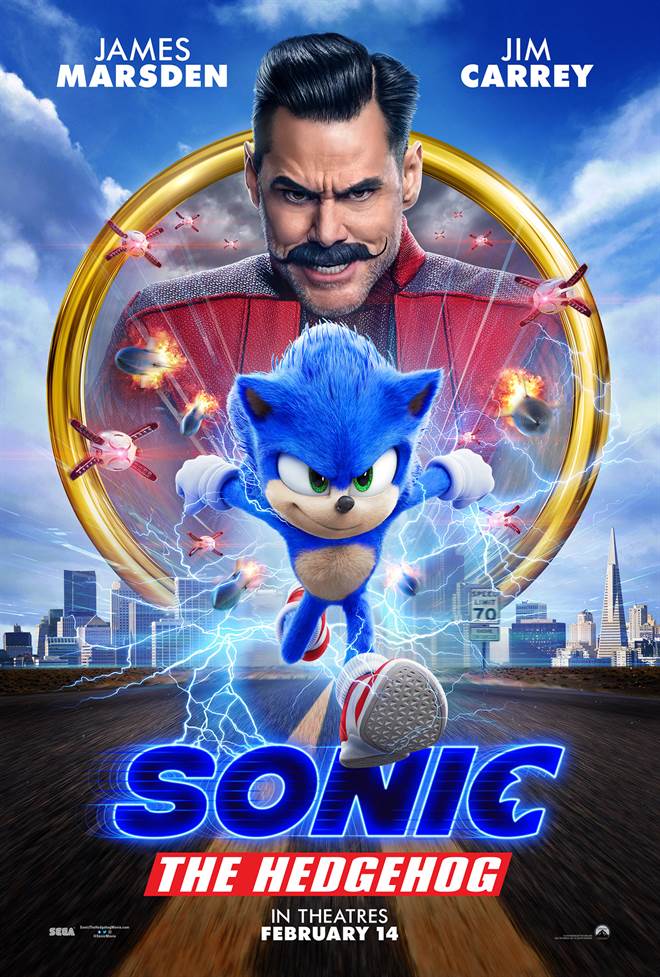 Almost 30 years ago Sega introduced a little blue creature to the gaming world called Sonic the Hedgehog.  He was super-fast, powerful, had enemies who wanted his power and he ran around various worlds collecting gold rings.  Since then there have been many iterations of the game making it one of the bestselling game franchises ever.  In the 1990s there were also two animated series and a Christmas special in North America and though they were popular, they weren't critically acclaimed shows. The Asian audiences also got their own show and a comic book.  Now, after a quarter-century has passed, an English Language feature film is making its way to movie theaters this Valentine's Day.

In line with the video game, Sonic (voiced by Ben Schwartz; Parks and Recreation) has to leave his world because he is being chased by evil beings wanting to take his power.  He "jumps" to a different dimension with the help of his gold rings and lands on Earth.  For many years he stays hidden in a small town called Green Hills, Montana and pretends the townspeople are his friends, though they have no idea he even exists (well except for "Crazy Carl" who tells everyone there is a blue devil living among them but nobody believes him).

One evening, after playing a game of baseball by himself, Sonic gets so angry and frustrated that he runs the bases very fast, causing a worldwide power surge creating outages everywhere.  Recognizing something unusual has happened, the military descends on Green Hills, along with scientific, mad genius, Dr. Robotnik (James Carrey; Bruce Almighty).  Town Sheriff, Tom Wachowski (James Marsden; X-Men) isn't pleased with the intrusion in his small town until he finds "the blue devil" hiding out in his garage and accidentally shoots him with a tranquilizer gun. However, once he realizes that Robotnik wants to take Sonic's power for himself in an attempt at world domination, Wachowski is determined to help the little guy escape to the mushroom planet.

Schwartz was an excellent choice to give the CGI character some true human emotions.  He plays the comedy and drama of the script equally well and helps the audience see Sonic as more than one dimensional. Marsden seems to play generally the same role in all his films and this one is no different.  Don't get me wrong, I like him but he is once again the "aww shucks" nice guy.  Carrey is very good as the evil Robotnik, complete with twirling mustache, but at times I sensed him channeling Ace Ventura, Pet Detective.  A surprise highlight is the smaller role of Wachowski's sister-in-law played by Natasha Rothwell (Insecure).  She obviously dislikes the man her sister chose to marry and makes numerous snarky, yet hilarious, comments (and don't even get her started on the "Blue Devil").

For all the controversy surrounding this film and the pushed back opening date due to the redesign of Sonic, the film plays well and moves at a solid pace.  The CGI is rather good for the most part with only a few minor sloppy moments.  Having seen a preview of the original Sonic at Cinemacon in April of 2019, I can unequivocally say the change in design was worth the wait. The previous preview was cringeworthy but the final version, which was more in line with the original game's design, was delightful.  Sonic was playful but heartfelt, Carrey was twisted in a way only he could be, and Marsden was sweet.

The movie pays homage to the game that will have fans reminiscing about their childhoods while offers enough pop culture and modern technological touches to entice younger generations.  Paramount took a gamble with this film but I have no doubts it will pay off for them in the long run.  The credits even leave the door open for a possible sequel but only time will tell if we will get a second helping of the little blue guy and, if we do, will it live up to the standard set by this first film.

Maureen Buccellato
Sonic is a fun film while dealing with a variety of emotions.  This is a family-friendly movie everyone can enjoy.
Full Review | Grade: B