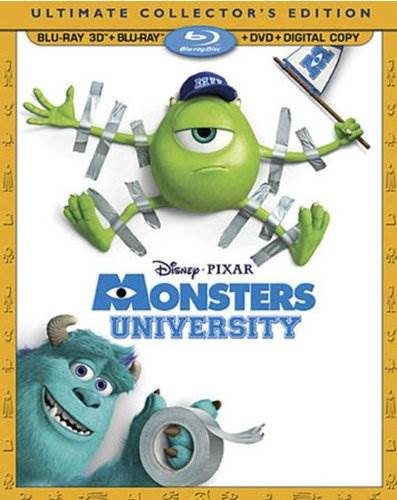 Purchase   DVD/Blu-ray/4K UHD
It wasn't so long ago that Pixar rejected the idea of churning out sequels to its greatest hits. Toy Story was the exception rather than the rule, having been succeeded by two critically hailed sequels -- the first in 1999, the second in 2010 -- each one arguably better than the last. But then, in 2011, came John Lasseter's middle of the road Cars sequel, Cars 2, followed by Monsters Inc. prequel Monsters University earlier this year. And that's not all, kids. Finding Dory, the long-rumored, soon-to-be-realized sequel to Finding Nemo, is also currently in production, with talk of other hot property Pixar sequels and prequels making the rounds among Mouse House power players. In other words, Pixar is officially in the animated sequel business. The question being: is it a business worth the once-revered animation studio's time? If Cars 2 is any indication, no. And Monsters University? It's better than McQueen and Mater's sophomore outing, but not by much. Whereas Pete Docter's original buddy-beast scare-fest was a fresh, inventive, hilarious blue collar adventure in the world of working stiff monsters, director Dan Scanlon's college-locked prequel is small in stature, timid and a bit too direct-to-video considering its legacy. It isn't a mediocre romp by any means, but don't be surprised if you grin sporadically and laugh lightly throughout, only to shrug your shoulders at the end of the film and mutter "s'alright."

Scanlon's prequel bypasses a quip from Monsters Inc. that originally placed the foundation of James P. "Sulley" Sullivan (John Goodman) and Mike Wazowski's (Billy Crystal) friendship in the fourth grade, pushing back the future Scare partners' first encounter to college, when the two meet on the Monsters University campus for the first time. Far from a functional relationship, the two freshman initially become rivals; Sulley, a popular jock courted by Roar Omega and its smarmy president Johnny J. Worthington III (Nathan Fillion), and Mike, a pint-sized upstart with big dreams no one believes will ever amount to the professional scarer he longs to become. But when Sulley's pride gets the best of him and he's booted from Roar Omega Roar, he's forced to join the laughing stock of the annual Scare Games: Oozma Kappa, an oft-ridiculed frat that just so happens to count Mike among its members. If the bickering duo can figure out a way to combine Mike's brain with Sulley's brawn, Oozma Kappa has a shot at winning the competition. If they can't, though, no-nonsense dean Abigail Hardscrabble (Helen Mirren) might just kick them out of the Scare program for good.

Prequels are notoriously tough to crack, and Scanlon and co-writers Daniel Gerson and Robert L. Baird never quite justify University's big screen existence. Monsters Inc. is The Right Stuff of the Pixar classics canon, and it has it all. Adventure, adversity, heart, an endless array of clever ideas, great villains, betrayal, grand set pieces, unforgettable chases, a fully realized world and instantly memorable Scare Floor record setters. Monsters University is too much like Wazowski; a feisty, wisecracking, over-reaching pipsqueak that isn't built to fulfill its aspirations. Clichés mount, the story feels much too conventional, and the jokes and references aren't as smart or sharply penned as those of the first film. Then there's Mike and Sulley's friendship; the primary cog in the machine that makes Monsters Inc. tick. Here, the two erratically hop between unpleasant frenemies and uneasy allies almost until the bitter end. Worse, cushy teddy bear Sulley can be a real jerk and snarky cyclops Mike can be downright obnoxious. There isn't enough groundwork to sell their inevitable meeting of minds, enough meat to make a filling meal, or enough of an overarching reason to completely care what will happen, much less endure a gotcha ending that leads to even more strife between the two. It doesn't help that their fate has already been written -- or animated as it were -- in stone. We know the two will become the best of friends. We know they'll one day land jobs at Monsters Inc. We know it will all work out. Tension drains. The law of diminishing prequel returns is unforgiving. And there isn't enough riding on the Scare Games, Mike and Sulley's education, their run-ins with Dean Hardscrabble, or college life in the Monster world to elevate the film above its second tier story.

Not that all is for naught. Not by a long shot. The animation is gorgeous, of course -- light years beyond that of Monsters Inc., now twelve years past its prime -- and the lush, suitably spiky university and the colorful characters that call its campus home are teeming with personality, masterfully executed subtleties, expressive flourishes and fun touches. Like most every Pixar production, even those that have been dismissed by the more critical adults in the audience, Scanlon's prequel delights in its imaginative visuals; flights of fancy that go a long way toward making what is essentially a rather uneventful tale seem like a bustling underdog story. It's good to see Mike and Sulley scaring up trouble again, and great to hear Crystal and Goodman giving their all to bring their unlikely odd couple to life. Yes, their verbal sparring never feels as spontaneous as it does in the first film, and yes, the long, long, long road to friendship they take grows tiring well before the two finally bond. (Even at a short 104-minutes, the prequel occasionally drags.) But with so many new monsters in play, so many games to be won, so much training to pull off in so short a window, such shortcomings hardly register... at least the first time through. Subsequent viewings don't hold up as well.

Lest this review reads more harshly than intended, it's important to stress there's still plenty of joy to be had in Scanlon's G-rated university comedy (just none that compares to the heart-bursting, tear-jerking relationship that developed between cute lil' boo and her monstrous caretakers in 2001). There's also plenty of laughs to share, plenty of playful sequences to enjoy, and plenty of memories ripe for a young fan's picking. Children old enough to bear with the film's (admittedly minor) pacing mishaps will have a blast; more so than their parents, who won't be quite so enamored with the prequel's stutter-stop payoff. The flipside being that many of those same kids won't get half of the gags in the film (spot the Carrie nod for extra credit), most of which are aimed squarely at mom and dad.

Is Monsters University fun? Sure. It'll make for a great family movie night this holiday season. Is it all that it could be? Does it live up to its potential? Was a prequel even the right way to go? No, no and... maybe. If the film followed Mike and Sulley in their early days at Monsters Inc., perhaps after opening with a montage of the duo's school days, it might have been something more. (The all-too-brief montage that runs prior to the end credits plays like a storyboard pitch of the prequel I wanted to see.) Instead, it starts small and stays small, rarely living up to the hilarious, larger than life adventure-comedy that is Monsters Inc. The irony being Cars 2 was criticized by some (myself included) for going bigger; so big it abandoned the smalltown heart of its predecessor. The lesson? If the Toy Story series has taught us anything, it's that the animated sequels that work are those that expand their worlds, embrace ambition, deliver poignancy and enhance core character relationships, to infinity and beyond. Tall order, I know.

Monsters University makes the Dean's List with a top tier AV presentation, and its 1080p/AVC-encoded 2D stunner is easily one of the best of its kind this year. The film's lush, lovely palette is warm, vibrant and oozes color. Primaries are striking, saturation is dead on, contrast is dialed in perfectly, black levels are bottomless, and there isn't the least little bit of noise. This is as straight-from-the-digital-tap flawless as it gets. And if you think the Monsters University video presentation is the big man on campus, wait'll you get a load of Disney's bristling beast of a Dolby TrueHD 7.1 surround track. LFE output digs in and lets out mighty roar after mighty roar, granting Sulley's most frightening displays of power the low-end oomph the film's weightiest sounds deploy.

Monsters University is yet another entry in Pixar's lesser canon, following Cars 2 and Brave. Will Pixar ever regain its footing? MU is a step in the right direction I suppose, but it still doesn't live up to its potential or surpass its predecessor, the indispensable Monsters Inc. Disney's 3-disc Blu-ray release is another matter entirely. This is how it's done, folks. Perfect video. Perfect Dolby TrueHD 7.1 surround. And a generous supplemental package (presented entirely in HD) to top it all off. It doesn't get much better than this. Too bad the same can't be said for Pixar's first prequel.

John Delia
Bringing back two of my favorite cartoon characters Sully and Mike with a prequel called Monsters University, Pixar presents renewed delight.  The madness that the two opposites brought to Monsters Inc more than ten years ago doubles in Monsters University, while providing a lot of heart and a ...
Full Review | Grade: A