It’s not much of an improvement, but “Despicable Me 2” capably delivers the goods with minimal strain. 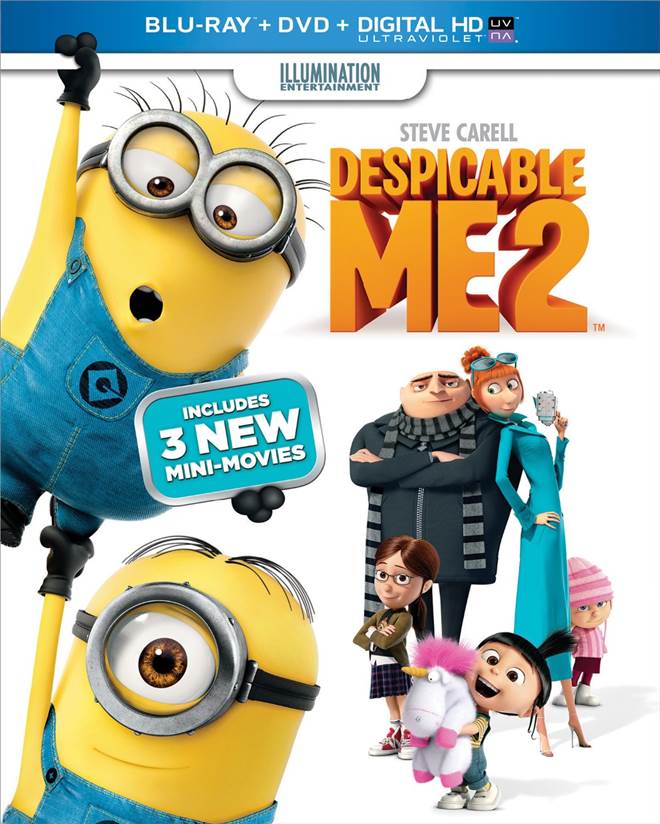 Purchase   DVD/Blu-ray/4K UHD
That 2010's "Despicable Me" turned out to be an enormous hit is a bit of a surprise. Perfectly pleasant but also unremarkable, the feature scratched a certain audience itch at the time, striking a distinct cartoon blow while introducing the world to the hyperactive comedy antics of the minions -- those miniature yellow slapstick machines that eventually made Universal Pictures a mint in merchandise sales. Well, the minions are back, along with Gru and his adoptive children, with "Despicable Me 2" perfectly content to replicate humor and spectacle for its adoring audience. However, with the lead character now playing for the good guys, certain changes have been made to the freshly-minted franchise, a few ideas that keep this sequel entertaining but never remarkable.

Now a domesticated man living with his three daughters, Margo (voiced by Miranda Cosgrove), Edith (Dana Gaier), and Agnes (Elsie Fisher), former supervillian Gru (Steve Carell) is content to be a dad, organizing birthday parties and perfecting a line of jellies and jams with help from his loyal minions and Dr. Nefario (Russell Brand). When a secret serum containing the power to make monsters out of anyone is stolen from a lab, the Anti-Villain League requests Gru's help with retrieval, paring up the hopelessly single man with Lucy (Kristen Wiig), a flighty but fierce agent. Sent undercover into a mall to spy on dubious shopkeepers who might be hiding the serum, Gru and Lucy bond over their shared love of gadgets and interest in the evildoing of others. Their top suspect is Eduardo (Benjamin Bratt), a Mexican restaurateur who reminds Gru of El Macho, a once potent bad guy bent on destruction. As minions are pinched, Margo falls in love with Eduardo's son Antonio (Moises Arias), and Dr. Nefario quits the fruit preserve game, Gru is left to save the world, which isn't nearly as frightening as being honest with his feelings for Lucy.

Inoffensive yet undercooked, "Despicable Me" took its time revealing a personality and storytelling drive, though its interest in CG-animated silly business was refreshing, rarely halting the antics to adhere to emotional bullet points the competition is often slavish to. The sequel continues the misadventures of Gru, who's now a family man seen dressing up as a fairy princess for Agnes's delight, also turning his cavernous lair into a food factory with hopes to erase his supervillain past for good, much to the concern of Dr. Nefario, who's looking for more of a challenge. The next logical step for Gru's dramatic progression is one of heroism, and the opportunity arrives with the Anti-Villain League invitation, offering the once malevolent man a shot as toppling evil for a change, which happens to be housed in a domed mall filled with cutesy shop names and lively tenants. Suddenly, Gru's a secret agent, with Lucy his partner and a few minions along for support. "Despicable Me 2" doesn't cough up a radical plot, but it's passable, making distinct moves to inch away from the original's satiric narrative interests.

The mall subplot is a letdown, with the script initially promising an expansive space teeming with suspicious types, allowing Gru and Lucy to pore through tenant behavior. Instead of many, we meet two: Eduardo and wigmaker Floyd (Ken Jeong), and it's clear from the outset who's the actual guilty party. Even for a family film, the mystery isn't very mysterious, a deflating realization that keeps "Despicable Me 2" from trouncing its predecessor in the tomfoolery department, missing a chance to expand the suspect list and widen the potential for humor. However, actual jokes aren't exactly a priority for directors Pierre Coffin and Chris Renaud, who stuff the effort with bathroom humor, including the use of a "fart gun" to score cheap laughs. "Despicable Me 2" is rarely laugh out loud funny, but neither was the original, always falling frustratingly short of a rollicking good time.

Welcome here are the voice actors, who once again topple expectations for lazy reads by delivering oddball characters and flighty emphasis. Carell is wonderful as Gru, managing his habitual silliness through the glue of a thick accent, which often accentuates the hilarity of his groans and growls. Wiig is a terrific addition to the cast (she actually had a small role in the original picture), matching her co-star with her own spastic behaviors, gifted some vocal honey to balance out the cartoon push of Carell's characterization. The film's best scenes feature Gru and Lucy's developing attraction, with rubbery animation keeping up with the inspired performances, creating a likable pair that naturally feeds into the sequel's obsession with the ex-supervillain's disastrous love life.

"Despicable Me 2" also sees the return of the popular minions, who blast the screen with gibberish and pratfalls, giggling at fart noises and serve up obscure pop culture references (because kids today can't get enough Carmen Miranda and "Love Boat" jokes?). They even participate in a few musical numbers to make themselves useful. With their own movie on the way for 2014, it seems strange for "Despicable Me 2" to be so minion-minded, but it's hard to discount the popularity of the squealing creatures, who once again light up the screen with their goggle-eyed wackiness.

Visually "Despicable Me 2" does more than what the film itself can offer with an AVC encoded 1080p transfer in 2.40:1. A powerful blend of colors assault the senses here, as there is no contrast noise and very little breakdown. Blacks are deep and rich, while brighter colors practically sparkle on the screen. And with an incredibly forceful DTS-HD Master Audio 7.1 mix to announce itself, you barely feel like you're sitting at home while watching a DVD instead of at the theater. While it's no big screen blockbuster, "Despicable Me 2" does well for what it offers. No source noise and solid punch from the rear speakers make you feel every ray gun blast and child's giggle.

There's more than just a missing serum for Gru to combat in "Despicable Me 2." With Margo going boy crazy, he's also put into a particularly painful parenthood position, developing the domestic interests of the script. However, big action eventually takes over in the final act, with furious jelly-gun combat supplying visual invention and a refreshing scale to the adventure, inching the sequel past the original in terms of eye candy and climactic creativity. It's not much of an improvement, but "Despicable Me 2" capably delivers the goods with minimal strain. A solid visual and audio presentation on Blu-ray with some fun special features make for a decent package and certainly worthy entertainment for the kids this holiday season.

For more information about Despicable Me 2 visit the FlickDirect Movie Database. This release has been provided to FlickDirect for review purposes. For more reviews by Chris Rebholz please click here.

Despicable Me 2 images are © Universal Pictures. All Rights Reserved.

John Delia
They're back again those funny characters that make the animated film Despicable Me 2 a hilarious situation comedy that delivers the laughter.  I'm speaking of the pill shaped ‘work a bee's' for the villain Gru called Minions.  In this sequel they dominate the screen and give most of...
Full Review | Grade: B