While Run All Night is not in the same league as some of Liam Neeson’s other action films (Taken, Non-Stop), it is a very gripping and engaging story. 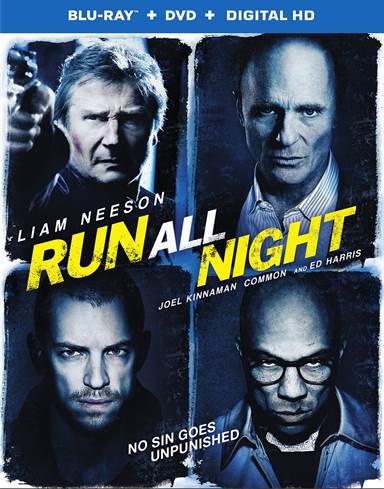 Purchase  DVD/Blu-ray/4K UHD
A few months have past, which means it is time for another Liam Neeson (Taken, The Grey) action film to come out on Blu-ray/Digital HD. This time around, it is a film titled Run All Night starring Ed Harris (The Rock, The Abyss), Joel Kinnaman (Robocop,Suicide Squad), and Vincent D'Onofrio (Daredevil, Jurassic World ), directing by Jaume Collet-Serra (Non-Stop, Unknown).

Neeson plays a washed up Brooklyn hit man named Jimmy Conlon. Haunted by his past sins he keeps away from his family, and drinks the remaining days of his life away. But when Jimmy's son, Mike (Kinnaman), gets in trouble, Neeson is called upon to put his old skills to use and protect his estranged family.

While, at first, Run All Night seems a bit slow, it's just setting up the exposition for what is a thrill ride later on in the film. Each actor is perfectly cast in their roles. The combination of such old-school powerhouses such as Neeson, Ed Harries, Vincent D'Onofrio, and the fresh blood of Joel Kinnaman, Common (Wanted, Now You See Me), and Boyd Holbrook (Gone Girl, Jane Got a Gun) really make for a very energetic and smart film.

Liam Neeson's career was given a kind of rebirth ever since he showed audiences in Taken that older men can still have a strong action presence in Hollywood. Since then, his career has been a non-stop thrill ride with a plethora of action films that seem to come out every six-eight months.  He has redefined the tough guy persona giving the over 40 set a hero to look up to and aspire (or at least fantasize) to becoming.

This is the third time director Jaume Collet-Serra has worked with Neeson, and you can easily tell that this relationship enhances the film.  It seems Collet-Serra knows exactly what to say to get the best performance out of Neeson, and it's a collaboration that, so far, has produced great results. As of late, there have been talks of Neeson hanging up his action persona for good, and I hope he doesn't do that without having at least one more collaboration with  Jaume Collet-Serra.

The video is presented in a 1080p AVC 2.4:1 aspect ratio. While not the best video presentation, Run All Night works with what is can since the film is entirely shot at night, and many scenes are muted.  Look for some washed out colors and a little blurring along the edges.

The audio encoded in DTS HD-MA 7.1 really bounces off the walls of your home theater room. While some of the background musical soundtrack is often muted, all the dialog, gun-shots, and explosions are heard perfectly.

Lately Warner Bros. Home Entertainment has been doing a superb job on the quality of special features on their Blu-ray releases. Unfortunately, it looks like this one slipped through the cracks. Run All Night includes only 2 featurettes on the film; however, as a consolation prize, they do have a 16 minute deleted scene section, that predominantly features Nick Nolte's (48 Hrs, Cape Fear) character that was mostly cut from the film.

While Run All Night is not in the same league as some of Liam Neeson's other action films (Taken, Non-Stop), it is a very gripping and engaging story that has a great cast of actors, enough action to please, and picture and sound that will keep you glued to your television set for the entire run-time.

Purchase a DVD/Blu-ray/4K UHD physical copy of Run All Night today at Amazon.com

Download Run All Night in Digital HD/4K from the iTunes store.

For more information about Run All Night visit the FlickDirect Movie Database.