The cast is phenomenal and I am not surprised by the Oscar nominations for Fassbender and Kate Winslet (Titanic), who plays Joanna Hoffman, Jobs’ Polish born right hand person. 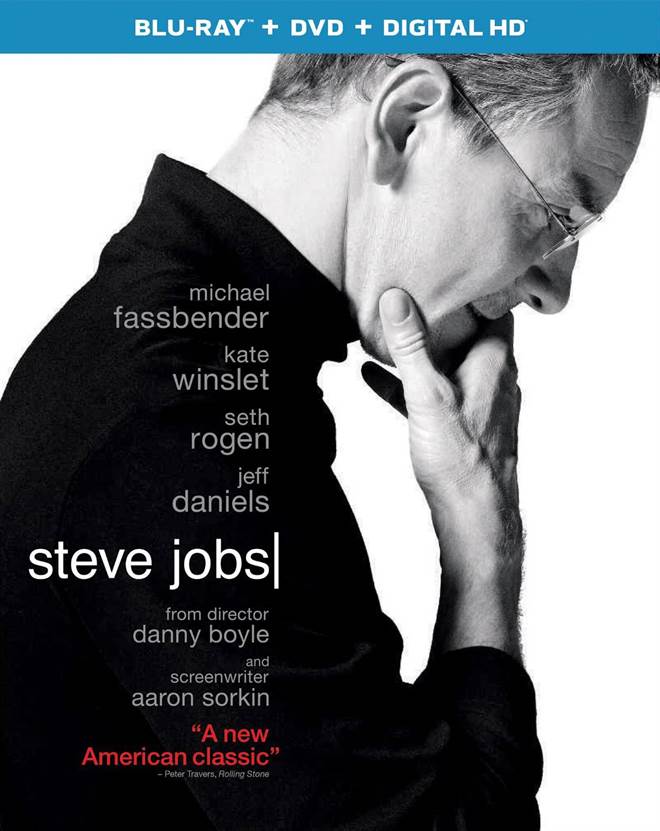 Purchase   DVD/Blu-ray/4K UHD
To some, Steve Jobs (Michael Fassbender; X-Men: First Class) was brilliant.  To others, he was an over-inflated ego, and, to a select few, he was the closest to God they think they will ever get.  Whatever he was, there is no denying he was a visionary and most probably brilliant.   While there have been a few movies and books about his life, none take the same view as Steve Jobs coming out on Blu-Ray and DVD on February 16th.

The film focuses on the time frame immediately preceding three important launches in Jobs' and Apple's history.  The first, or act one, is in 1984 just before the launch of the MAC. The second takes place four years later and the final, "third act" is a decade after that with the introduction of the iMac.  While the launches and products are an important part of who Steve Jobs was, the movie looks more closely at the relationships he formed and destroyed during his "rise to fame".

From this version of his biography, we get the impression that Jobs was a complicated, hard man.  He denied paternity of his daughter for many years. He alienated the people who worked for him, and he pushed out co-founder Steve Wozniak (Seth Rogen; Knocked up) and one time Apple CEO John Sculley (Jeff Daniels; The Newsroom).

Director Danny Boyle (Slumdog Millionaire) does a fantastic job of pacing, camera angles and aesthetic.  As he mentions in the extras, the movie was shot with 3 different types of film to give each "act" a distinct look and feel.  He also shot on location in the actual places these events happened, which lends an air of authenticity to the film.

The cast is phenomenal and I am not surprised by the Oscar nominations for Fassbender and Kate Winslet (Titanic), who plays Joanna Hoffman, Jobs' Polish born right hand person.  Fassbender embodies Jobs and makes the viewer feel his innovative genius, while hating him for his less than personable "bed side manner".  Winslet steals every scene she is involved in and Rogen and Daniels are veterans who hold their own in this ensemble.

The Blu-ray mildly disappoints with minimal extras.  There is commentary from both Boyle and screenwriter Aaron Sorkin (The West Wing) and the only other extra is behind the scenes footage presented in three acts.  The behind-the-scenes gives a lot of terrific insight into the actors, characters, director, musical direction of the piece and the screen play itself.  I only wish there had been more offerings.  Also, ironically, there is no iTunes download (just Ultraviolet) in this combo pack which is unusual (and perhaps deliberate).

The 1080p high definition video with 2.40:1 aspect ratio is superb and captures the footage beautifully.  The grainier nature of the first act is purposeful and helps to transport the audience back to 1984.  The DTS-HD Master Audio 5.1 is clear and enhances the soundtrack in all its synthesized glory.  The Orchestration in the second act is bountiful and the viewer is enveloped by its grandness.

As a whole, Steve Jobs comes across as someone to be admired, yet loathed, in this telling of his life.  He was not a nice man, nor was he kind but his contributions to the world of technology cannot be denied.

For more information about Steve Jobs visit the FlickDirect Movie Database. This release has been provided to FlickDirect for review purposes. For more reviews by Allison Rose please click here.

Paul Kates
To label a film biopic can sometimes be a little misleading. There is always a case for artistic license to emphasis part of the production, and this may be the case of Danny Boyle's (Trainspotting, Trance) latest offering, Steve Jobs.
Full Review | Grade: B