Home / Reviews / In The Heart of The Sea

In The Heart of The Sea's audio, presented in Dolby Atmos, is pure ear candy. 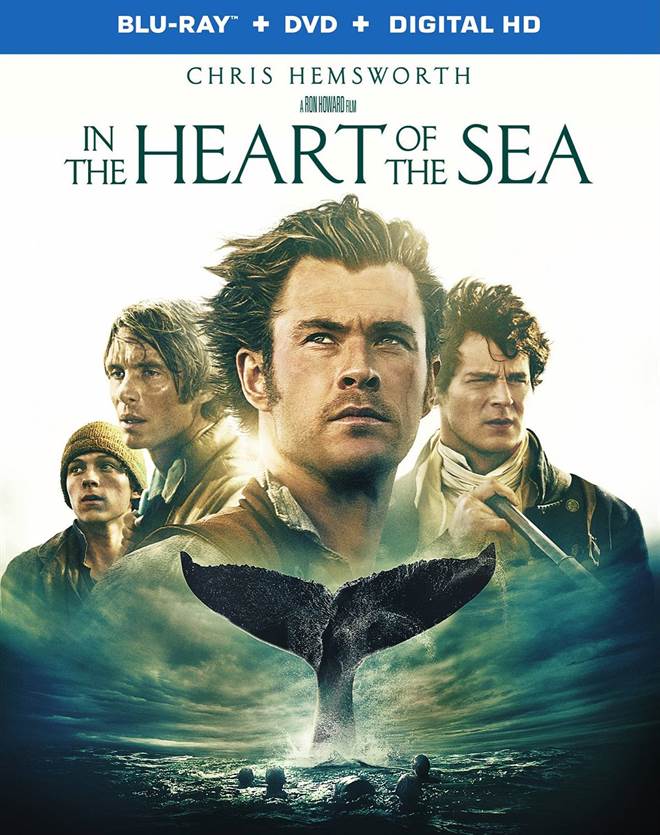 Purchase   DVD/Blu-ray/4K UHD
Most people have heard the story of Moby Dick by Herman Melville, but most people have NOT heard the back story behind the creation of this American classic. In the Heart of the Sea, starring Chris Hemsworth (Thor), Benjamin Walker (Abraham Lincoln: Vampire Hunter), and Cillian Murphy (Batman Begins), as well as being directed by directed by Ron Howard (A Beautiful Mind), hopes to change all that.

Based on the novel by Nathaniel Philbrick, In the Heart of the Sea tells the tale about the fateful journey of the Essex whaling ship. During the winter of 1820, the Essex left New England in search of whale oil to fill their cargo. Instead, they found death and destruction at the hands of the sea, and a large white sperm whale that leaves the crew without food, water, or a clear cut path home.

Having a extremely strong cast, as well as a seasoned director, does not always guarantee an amazing film and unfortunately, this is the case with In the Heart of the Sea. It has all the right elements - great cast, great director, interesting story, top-notch special effects — but all them combined can't help the audience relate or engage with the story or actors. While Hemsworth's Owen Chase is driven to prove to the world he is a whaler, and Benjamin Walker's George Pollard is trying to prove to the world that he can carry his family's name, no one really cares, and that is the heart of the problem. The climactic battle with the sperm whale takes place half way through the film, and while the rest of the story is compelling, it just doesn't keep the audience interested.

In the Heart of the Sea is presented in 1080p AVC. The picture is sharp with no artificating. The colors are a bit washed out and muted throughout the film; however, this is by design, as the theatrical releases used the same color palette. Overall, the film's video is top notch and on par with most recent Blu-ray releases.  The audio, presented in Dolby Atmos, is pure ear candy. The dialog is mostly contained to the front center channel speaker, while the special effects use the rest of the speakers, with the crashes of the ocean waves coming through loud and clear.

Aside from the Blu-ray, DVD and Ultraviolet Digital HD In the Heart of the Sea also contains a variety of special features to compliment the theatrical film.

The Hard Life of a Whaler - Interviews with cast and crew about the production.

LIGHTNING STRIKES TWICE: The Real-Life Sequel to Moby Dick - A 30 minute documentary about the discovery of a Nantucket whaling ship wreckage in 2008

In the Heart of the Sea is a very well acted and technically accomplished film. However, it is also a very forgettable one. At no time did I feel like I was emotionally involved with any of the actors, or the film itself. If you missed In the Heart of the Sea in theaters, then I highly recommend watching it at least once. If you have already seen it, then let this Blu-ray release sail by without you aboard.

For more information about In The Heart of The Sea visit the FlickDirect Movie Database. This release has been provided to FlickDirect for review purposes. For more reviews by Nathan M Rose please click here.

Read More In The Heart of The Sea Reviews

Allison Rose
The one thing I actually took away from this film was how hard it was to be a whaler, working hard for years at a time, under less than ideal conditions.
Full Review | Grade: C