Home / Reviews / In The Heart of The Sea

The one thing I actually took away from this film was how hard it was to be a whaler, working hard for years at a time, under less than ideal conditions. 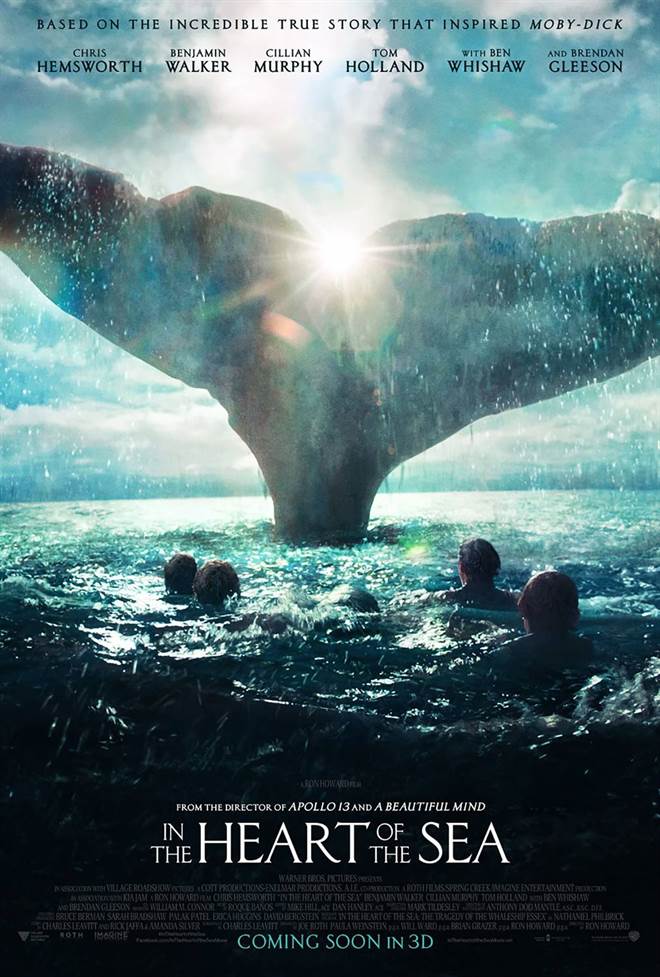 Purchase   DVD/Blu-ray/4K UHD
There has been so much written about the almost mystical, great white whale that haunted Captain Ahab's dreams in Moby Dick.   Herman Melville's novel is the quintessential story that has enraptured people for over 150 years.  Lesser known is a nonfiction book, by Nathaniel Philbrick, retelling the tale of the whale ship Essex, destroyed by a huge white whale leaving the crew stranded for 3 months.

Warner Bros Studios has taken Philbrick's story and brought it to life in 3D.  Coming to theaters on December 11, 2015, In The Heart of The Sea looks at not only the 1800's whaling industry but the myth surrounding the big whale.

The Essex was a masterful whaler which set out from Nantucket with a new captain (Benjamin Walker, Abraham Lincoln: Vampire Hunter) and a mostly experienced crew.  Set on a voyage to bring back 2000 barrels of oil, the whalers found little.  Stretching the boundaries even further they ended up many miles from usual hunting grounds and were elated to find a plethora of whales in order to fill their coffers.

Unfortunately, they also came across the largest Sperm whale they have ever seen.   He was a monster bent on destroying anyone ship that looked to harvest members of the community for their own monetary gains.  When the Essex and First Mate Chance (Christopher Hemsworth, Thor), encountered the beast and attempted to kill it for its oil, it seeks revenge, destroying the ship and stranding the crew.  As the men attempt to survive in the whale boats, the creature stalks them and watches as they dwindle in numbers while attempting to return home.

The movie storyline is told mainly as a narrative to Herman Melville (Ben Wishaw, Spectre) by  Wilkerson (Brendan Gleeson; Harry Potter and the Goblet of Fire) in what eventually will become the basis for the great American novel. Wilkerson was a lad of 14 on his first turn at sea and managed to live through the horror of the damage the whale caused.

The story itself is interesting, but I was waiting for this epic epiphany to occur and it never really did.  I'm not sure if was Ron Howard's (A Beautiful Mind) fault as director or Hemsworth's acting, but the one scene that could have been climactic merely falls flat.  Hemsworth is well cast when he is portraying his usual confident, almost cocky, sure of himself role but he lacks the depth to tackle the more challenging scenes that require a deeper level of emotion.

The visuals could have been stunning, but, sadly are also lacking. 1820s New England is simply dreary, and the rest of the background scenery is merely a vast ocean stretching for miles and miles which I assume was Howard's point to showcase how alone the sailors really were.  The one thing I actually took away from this film was how hard it was to be a whaler, working hard for years at a time, under less than ideal conditions.

Ultimately, I feel  In the Heart of the Sea could have been so much more than it ended up being.  It ended with a whimper as opposed to a cannon blast, and I think I might have enjoyed reading the book more than seeing the film.

Purchase a DVD/Blu-ray/4K UHD physical copy of In The Heart of The Sea today at Amazon.com

Download In The Heart of The Sea in Digital HD/4K from the iTunes store.

For more information about In The Heart of The Sea visit the FlickDirect Movie Database. This release has been provided to FlickDirect for review purposes. For more reviews by Allison Rose please click here.

Read More Reviews For In The Heart of The Sea