Marauders doesn’t take advantage of its availability of Bruce Willis. I had hoped that his role in the film would be much bigger and it wouldn’t rely so heavily on Christopher Meloni. 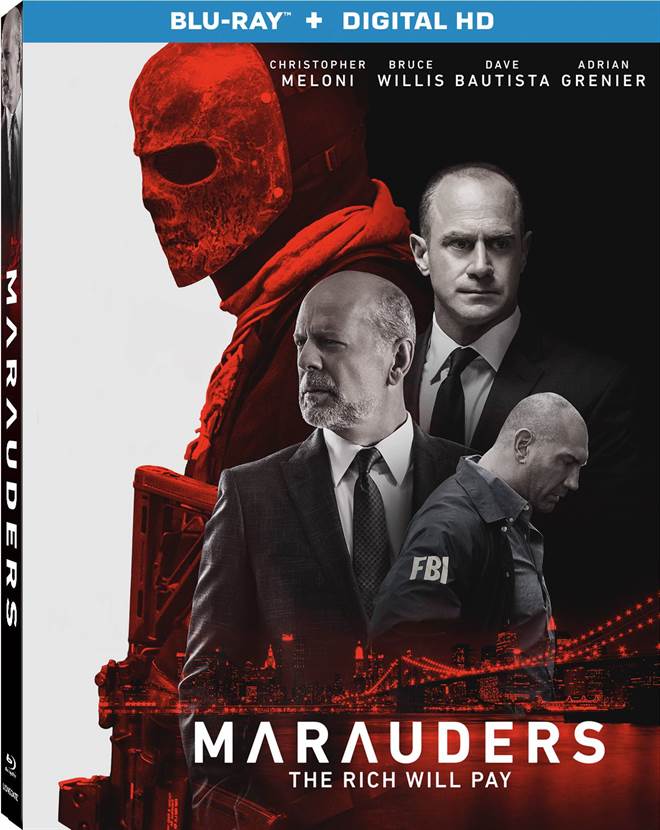 Purchase   DVD/Blu-ray/4K UHD
Being released this week on Blu-ray & Digital DVD from Lionsgate Premier films is Marauders, an action film starring Law & Order's Christopher Meloni and Bruce Willis. Now, many may not have heard of it, mainly because it's a straight to Blu-ray release, which would seem odd considering the cast. I mean come on! You have Christopher Meloni and Bruce Willis along with Dave Bautista (Drax from Guardians of the Galaxy & Spectre) and a little less known, but for those HBO fans, Entourage's Vincent Chase, Mr. Adrian Grenier, is also in this film!

That being said, one would think it would at least get a theatrical release considering some of the garbage that truly makes it into the theaters! But it didn't, and when it comes to anything that has Bruce Willis in it, I'm always curious as to the content.

So, let's get into it! Marauders starts out with a pretty bad ass bank robbery. Shooting the manager right off the bat and flinging his butt straight through the glass doors, the team of four come in wearing pretty heavy body amour with skull masks, carrying machine guns with the intent of getting some cash! Once inside, one of the men throw down a Bluetooth speaker that starts giving digital instructions to the patrons of the bank; something I thought was pretty cool. Maybe not 100% reliable at the moment but for the sake of not having to use your voice or to try and disguise it, it served its purpose in a cool current way. Get on the floor! Put your cell phones on the floor and no one will get hurt. They get into the safes where the cash is stored and on the way out plant what looks like a bomb in the middle of the floor. The speaker instructs people to stay still for 20 mins or the bomb will go off. And as the last man walks to the door, he shoots and kills the manager who was lying on the floor, point blank!

Cut over to the FBI and Agent Jonathan Montgomery (Meloni) who is assessing the bank robbery with his team, along with a newbie straight out of the academy, Agent Wells (Grenier) and Stockwell (Bautista). Of course, through the investigation, they find that $3 million were taken from the bank, a bank that is owned by Jeffery Hubert (Bruce Willis). After a second robbery of a second bank, suspicions turn to Hubert. Something doesn't seem right. In fact, it seems as if there may be a bigger conspiracy at hand, but you don't think for one second I'm going to tell you what it is, do you?

I will say this, though. For the big cast that it has, Marauders doesn't take advantage of its availability of Bruce Willis. I had hoped that his role in the film would be much bigger and it wouldn't rely so heavily on Christopher Meloni. Even Bautista & Grenier are a bit underused. And there are points during the film that you may shake your head and say to yourself, "what was that?" I think sometimes filmmakers have a great vision and plan and muddy it up with all the editing and jumping around.

There are definite reasons why this never made it to a big screen. Though, for the smaller screen it isn't bad. In fact, while it may not be the best film ever, it truly isn't the worst film I've seen. I would even say its not the worst film I've seen this year! It's entertaining and has some cool elements during the film where you think this had the potential to be a big summer action film.

The Blu-ray edition of Marauders has a few special features. It includes commentary with director Steven C. Miller and Cinematographer Brandon Cox, a featurette entitled The Making of Marauders, along with deleted and extended scenes. It also has a few cast & crew interviews and a ton of trailers included.

Overall, while I was impressed with some elements of the film, at the end of the day, it didn't blow me away. It was one of those movies I would totally watch because of Bruce Willis and then wonder if another Die Hard is in the works, which there is. Of course there is! Like you had to ask!

I give Marauders one and a half stars out of five.

It has its good moments that were few and far between, but I'm afraid that while their tagline says "The Rich Will Pay", I don't think the general movie consumers will pay to see this.

For more information about Marauders visit the FlickDirect Movie Database. This release has been provided to FlickDirect for review purposes. For more reviews by Sean Ferguson please click here.