Alice Through the Looking Glass is a little busy and there is a lot going on, but there is so much origin presented that all the detail is worth watching. 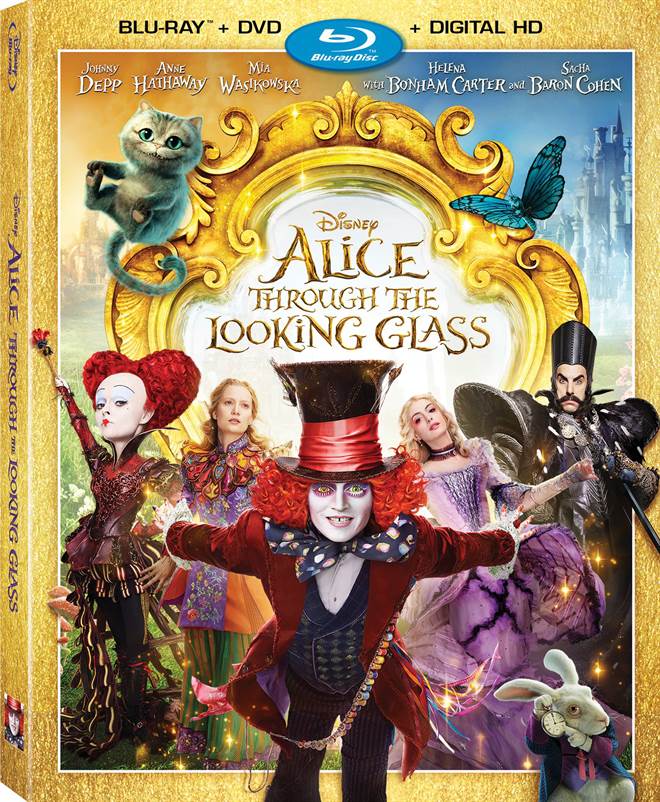 Purchase   DVD/Blu-ray/4K UHD
There are just some movies that suck you into the fantasy world they create, and by that I mean, you become so immersed in the scenery, the language, the imagery, and the costumes, that after the movie is done, you look around and wonder why real life looks so plain.  Alice Through the Looking Glass is such a movie.  Following the original, Tim Burton's 2010  Alice in Wonderland, our favorite characters, and their world, come back to us for us to revisit.

Suzanne Todd, the Producer, stated that Alice Through the Looking Glass was, in some way, a prequel to the 2010 movie as the characters travel back in time.  She commented that they got to show us how things became the way they are and that they were able to fill in the blanks left by the first film.  They were able to show the audience how the characters came to be and Director James Bobin and Executive Producer John G. Scotti did exactly that and even introduced a new character to us, Time.

Mia Wasikowska, Anne Hathaway, Johnny Depp, and Helena Bonham Carter reprise their roles from the first film and, as they did before, bring their characters to life and make you feel as if there hasn't been a 6-year gap in between the films.   Alice (Mia Wasikowska; Crimson Peak) is no longer a child in this sequel - in fact, she's become her father, sailing the high seas.  Being told that "a sea captain is no job for a lady" sends Alice back into Underland but through a giant mirror this time.  Not merely sightseeing and exploring in this film, Alice embarks upon a journey to save her friend, the Mad Hatter (Johnny Depp; Pirates in The Caribbean), from his illness and intense guilt over losing his family.  What can Alice do, but be Alice?  She steals the Chronosphere from Time (Sacha Baron Cohen; The Brothers Grimsby) to travel back to the past, save Hatter's family and ultimately her friend, the Hatter.

The Blu-ray is presented in MPEG-4 AVC 1080p High Definition video with a 1.85:1 aspect ratio.  The quality of the Blu-ray is excellent and the colors, though almost garish in some scenes, are spectacular.  In a movie such as this color, clarity and crispness are so important to clearly show the setting of Alice's fantasy world and this Blu-Ray does not disappoint. The colors are vivid and sharp which is most evident when looking at the various costumes and fantasy world of the Underland.

The audio is presented in 7.1 DTS. The soundtrack is amazing and whimsical and complements each scene, with each word, and note, clear and crisp.  The mix is adequate as so not to distract from the stunning visuals which is the real star of the film.

•             Behind the Looking Glass:  Using the Chromosphere: Go back in time to explore the making of the film.  Spend eight glorious minutes with Director, James Bobin, and Screenwriter, Linda Woolverton, discovering the original story from the 1800s, to Disney's 1924 story, continuing to the 1951 animation and into the 2010 movie.  Royalty even made an appearance - Helena Bonham Carter, the Red Queen, and Anne Hathaway, the White Queen, make appearances and add commentary!  Learn about how Time became a person.

•             A Stitch in Time:  Costuming Wonderland:  One of the most amazing aspects of the film is the costumes that just draw you into the fantasy world of Alice.  Hear about the intricacies of the costumes and the reasons behind them.

•             Characters of Underland:  So many times, extras feature the main characters, but these few minutes are spent familiarizing the audience with characters that aren't considered main, but are not just supporting, such as Absolem, the White Rabbit, and, of course, Cheshire Cat

•             Time On...:  Time, played by Sacha Baron Carroll, gives a monologue about his close relationship with the author from years ago and his perception of his role in the film.  A little strange, but short enough that you won't feel you wasted your time watching it.

•             Alice Goes Through the Looking Glass:  A Scene Peeler: Director James Bobin shows us the scene of Alice going through the looking glass in blue screen and in the finished product.  You can only be amazed at what imagination Mia Wasikowski must have to film that scene with only blue around her and how perfect the filmmakers were able to insert the background and supporting animations so perfectly!

•             Alice Goes Through Time's Castle:  A Scene Peeler:  Director James Bobin shows us another scene peeler when Alice goes through Time's castle for the first time.

•             Audio Commentary:  Always one of my favorite bonus features, the audio commentary features Director James Bobin providing his opinion on the movie, characters, and scenes instead of music and dialogue and offers insight into the actors and sequences.

•             Deleted Scenes:  Deleted scenes are always another favorite of mine and not only do we get to see the deleted scenes, which, in my opinion, should never behave been deleted, but there is also audio commentary from the Director explaining the sequences and why they didn't make the final version of the film released in theaters.

The film is a little busy and there is a lot going on, but there is so much origin presented that all the detail is worth watching.  The colors, costumes and background images were over the top, but they only supported the fantasy story that is Alice Through the Looking Glass.  Children of all ages should be exposed to this classic tale, redone by Director James Bobin.

Despite Tim Burton being a Producer in this film, Alice Through the Looking Glass is still second to Burton's original 2010 film.  Nonetheless, this film is still needed to complete your Blu-ray Alice collection/Johnny Depp.

For more information about Alice Through the Looking Glass visit the FlickDirect Movie Database. This release has been provided to FlickDirect for review purposes. For more reviews by Jennifer Broderick please click here.

Alice Through the Looking Glass images are © Walt Disney Pictures. All Rights Reserved.

Allison Rose
The biggest problem with Alice Through the Looking Glass is it tries too hard and falls short.
Full Review | Grade: D