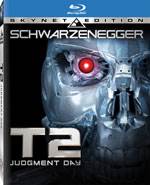 Purchase   DVD/Blu-ray/4K UHD
There has never been another DVD (and looking like Blu-ray for that matter) that has been released as many times as 1991 smash hit film, Terminator 2: Judgment Day. Now with the release of the new Terminator Salvation in theaters, this Memorial Day weekend Lionsgate has unleashed upon the world Terminator 2: Judgment Day (Skynet Edition).
If you are not familiar with the story, in Terminator 2: Judgment Day, Arnold Schwarzenegger returns as "The Terminator" in this explosive, action-adventure spectacle.  Now he is one of the good guys, sent back in time to protect John Connor, the boy destined to lead the freedom fighters of the future.  Linda Hamilton reprises her role as Sarah Connor, John's mother; a quintessential survivor who has been institutionalized for her warning of the nuclear holocaust that she knows is inevitable.  Together, the threesome must find a way to stop the ultimate enemy - the T-1000, the most lethal Terminator ever created.
In all honesty there isn't much to say that hasn't already been said about this film.  It's ground-breaking special effects (for that time period) unshured in an era of special effects laden films, the cinematography is dead on, the script is amazing, its cast is dead on, and in my mind ,this is probably one of the best films ever made in movie history.
However, was this release just created to cash in on the hype for Terminator Salvation or is this an upgrade to the original Blu-ray release, and the DVD/Laserdisc releases of past years?
The quick answer is a resounding yes to both.  The long answer is yes, but with caveats.
Picture Quality
This is where it gets a bit complicated.  Home Theater enthusiasts have been crying foul over the digital noise reduction since it was released to the public.  However, upon closer examination taken by the Digitilbits.com, it appears that it is VC-1 codec that is the issue not the transfer itself. However, in my opinion, the release looks amazing.  I have personally owned every single release of Terminator 2: Judgment Day; there has never been an optical format; and in my opinion, this beats every single one of them.
Audio Quality
Back in 1992, hearing a demo of the future battle scene in a local retail store's home theater room sold me on purchasing a Dolby surround system and a laser disc player.  Ever since then the crashing of a HK from the left front speaker to the back right speaker has brought tears and joy to my eyes.  With this new release, and the DTS-HD MA 6.1 lossless soundtrack, Terminator 2: Judgment Day has never sounded better and is music to any enthusiast's ears.  The explosions pack their punch just like the film did in the theater, the dialog is crisp, and my appreciation for Brad Fiedel‘s soundtrack has never been higher.
Special Features/Supplements
With a film so important to the movie industry, it is no surprise that Terminator 2: Judgment Day has always had a great selection of supplements. Now with the advance of technology, viewers can even be more immersed in the behind-the-scenes action involved with creating such a landmark film.  However, since this is such an old release, Lionsgate has basically reissued the same bonus material. But they have also displayed it in a way that seems new and fresh.
All-in-all the transfer is a definite upgrade over the previous release, and miles ahead of the first laserdisc release back in 1992 (James Cameron did approve the final product).  If you are a fan of the Terminator series, or just a casual fan, this is a "must" upgrade for your system.  James Cameron, Arnold Schwarzenegger, Linda Hamilton, Robert Patrick, and Edward Furlong are probably at their best in their respective careers, the film transfer is simply amazing, and this film is the perfect escape for a couple of hours for any home theater enthusiast.
P.S.  Be sure to enter the code 82997 (The date of "Judgment Day") on your Blu-ray player to unlock a special extended edition.