Once Upon a Deadpool Blu-ray Review

Once Upon a Deadpool is more of a companion piece rather than a replacement for Deadpool 2 as it doesn’t easily explain several of the plot points which are glossed over in this family-friendlier version. 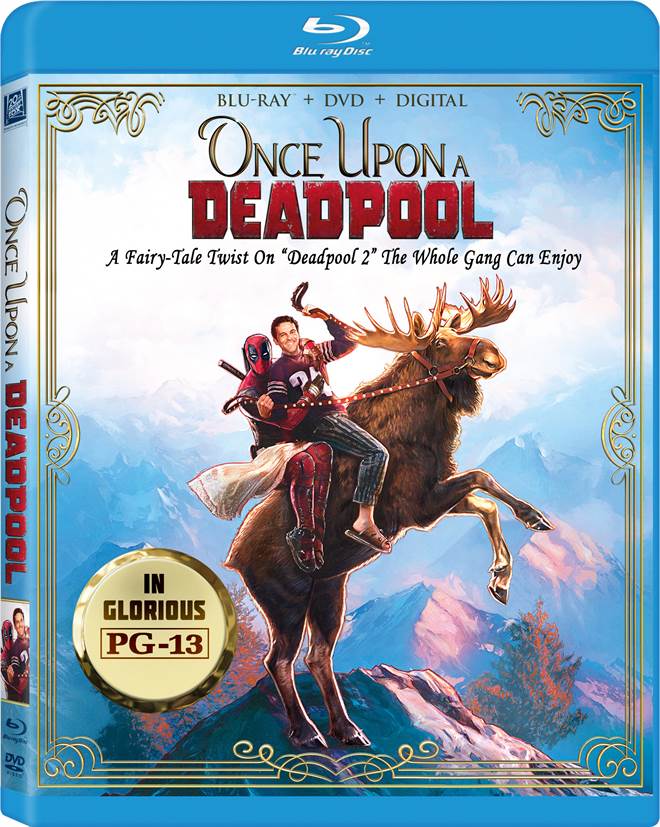 Purchase   DVD/Blu-ray/4K UHD
When Deadpool made its way to theaters on 2016 it did so with a hard R rating much to the studio's and parents' chagrin.  It was only natural when the sequel arrived that it too would have that same R rating and be inappropriate for children.  In fact, part of what audiences like so much about the films and the character is his crass demeanor that is so uncharacteristic of a superhero.

Unfortunately, that same inappropriateness also alienated a segment of the populations that would want to bring their children to a superhero film.  This past December, Fox seemed to remedy this flaw with Once Upon A Deadpool – a PG-13 rated version of the film.  With the success of the cleaned up film, it was only natural that it would be released for home entertainment and everyone can rejoice because that time has finally arrived.

For the uneducated, Deadpool (Ryan Reynolds; X-Men Origins Wolverine) a.k.a Wade Wilson is a former special ops soldier turned mercenary who finds out he has cancer.  In an attempt to discover a cure he undergoes experimentation that leaves him physically disfigured but with superhero powers.  In Deadpool 2 the love of his life, Vanessa (Morena Baccarin; Gotham), is murdered and Wade finds himself with no desire to live.  That is, of course, until he finds himself on a mission to save a mutant, teenage boy, Firefist (Julian Dennison; Hunt for the Wilderpeople), from the half human/half cyborg Cable (Josh Brolin; No Country for Old Men) who shows up from the future to stop the kid before he becomes a vicious killer.

While the original movies lend themselves to an R rating, they missed out on a large segment of the population.  In order to be more inclusive Reynolds and writers Rhett Reese and Paul Wernick (Zombieland) enlisted Fred Savage (The Wonder Years) to recreate his character from The Princess Bride to help tell a cleaner version of the story.  The combination works in theory with a few hiccups along the way.

Once Upon a Deadpool is more of a companion piece rather than a replacement for Deadpool 2 as it doesn't easily explain several of the plot points which are glossed over in this family-friendlier version.  It also doesn't make all that much sense to a younger generation that probably isn't familiar with the character a young Savage played in The Princess Bride.  However, it does give parents what they want – a cleaner version of an R rated film that they can take their kids to see. Though, that isn't saying much as the PG-13 rating still leaves plenty of leeway for curse words to fly and to include inappropriate references throughout.

The Blu-ray disc is the standard fare quality wise with a 1080p resolution and a 2.39:1 aspect ratio.  Everything looks pretty much clean but at the end of the film, the color palette seems to be more muted than I remember especially when the team tries to save fire fist from killing the headmaster.  Deadpool's red costume looks darker bordering towards a reddish black hue.  The audio is a little stronger since it is DTS-HD Master audio 7.1.  The dialog is crisp and the eclectic soundtrack comes across nicely.  The combo pack does not offer any extras though which is a little disappointing. A few short features describing the concept for this version and perhaps an interview with Fred Savage would have been a fun addition.

I think the thing I love most about this film is that it benefits charity. Twentieth Century Fox Home Entertainment will be donating $1 from every Blu-ray™ Purchase or Digital Buy or Rent from January 15 to January 28, 2019, to Fudge Cancer (US only. Minimum donation of $100,000). Fox also donated $1 for each ticket purchased during the film's festive theatrical release.

It also offers younger audiences to get an idea of what Deadpool is without being subjected to the R rated version.  However, this "tamer" version lacks some of what I originally loved about Deadpool with the filthy mouth and the graphic violence (shooting someone in the head just doesn't have the same impact thought the blood splatter).  As I said earlier this would make a nice companion piece to the original film so if you own one you should definitely own the other.  If you already have Deadpool 2 at home, go buy this one.  If you do not, invest in both movies.

For more information about Deadpool 2 visit the FlickDirect Movie Database. This release has been provided to FlickDirect for review purposes. For more reviews by Allison Rose please click here.

Allison Rose
If the first Deadpool movie was funny and shocking the second is even more so with raunchier jokes and gags throughout.  The script may not be as good as the original but it is still an enjoyable way to spend a few hours.
Full Review | Grade: A