Redford picked a strong project to be his swan song and Lowery made sure he rode off into the sunset with dignity and flair. 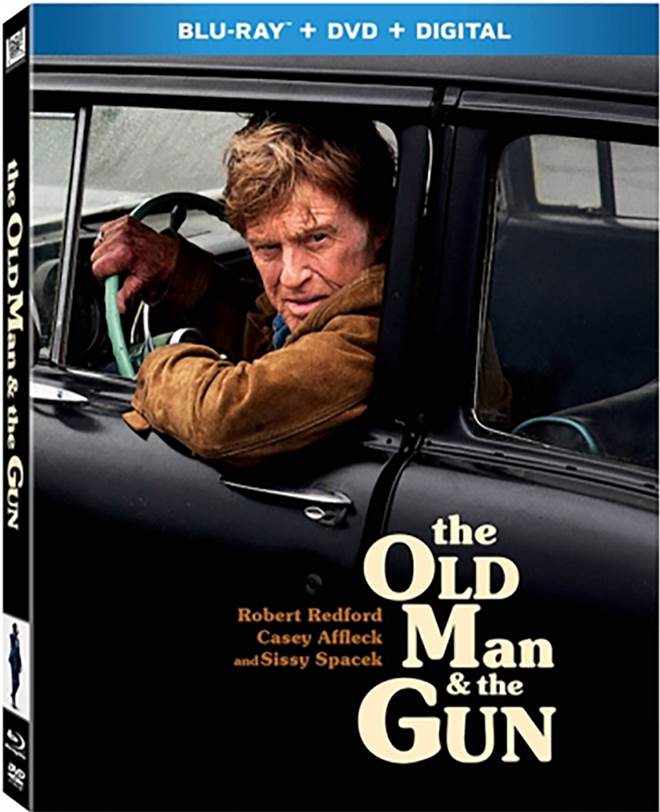 Purchase   DVD/Blu-ray/4K UHD
Forrest Tucker (Robert Redford; Captain America: The Winter Soldier) was a career criminal.  He broke out of prison successfully eighteen times in his lifetime, robbed probably hundreds of banks and stole an estimated four million plus dollars.  He was described as a gentleman who was always nicely dressed and well put together as he held the bank at gunpoint.  In 1999, at the age of 78,  he robbed his last bank and was caught.  He died behind bars never realizing his dream of having his life immortalized on film.  In 2018, 14 years after his death, Forrest's story was finally told in The Old Man and the Gun.

Victims would describe him as dapper and kind even as he was robbing them and he wore a hearing aid.  He would walk in, calmly ask for the money, flashing his gun but not even taking it out and walking back out richer.  He'd swap out his stolen getaway car for another car and calmly drive off while the police would be searching.  On one particular day, Forrest's "hearing aid" (which is really a modified police radio) alerts him that the police are looking for his car so he stops on the side of the highway to help a stranded motorist watching as the police whiz on by.  Forrest gives Jewel (Sissy Spacek; Coal Miner's Daughter) a ride into town where they kindle a friendship.

After Forrest tries telling Jewel the truth about his profession he relents and tells her he is a traveling salesman when she doesn't believe him.  Meanwhile, Detective Joh Hunt (Casey Affleck; Manchester by the Sea) has begun a to build a profile and a case against Tucker and his accomplices that he has dubbed " The Over the Hill Gang".  A game of cat and mouse then ensues until the FBI finally catches Tucker.

With a well-crafted story, David Lowery (Pete's Dragon) draws the audience in and makes us almost want to root for the aging criminals to get away.  He masterfully frames Redford so we see him as debonair and not fragile.  Redford, for his part, once again reminds why he has worked in Hollywood for decades.  Sadly, he has stated that this was his last film as he now plans to retire.  Hopefully, the right project will lure him back to the big screen in the future.  Spacek is wonderful opposite Redford as she plays a widow whom, despite her age, seems to have a youthfulness to her.  Affleck was a surprise here as I didn't even realize that was him for probably the first ten minutes he was on screen.

Twentieth Century Fox Home Entertainment brings this film to Blu-ray with 1080p video quality and a 2.39:1 resolution.  The film is grainy but I believe that was purposefully done as to remind us of a time gone by and it works to transfer us back to the ‘80s. The DTS-HD Master audio 5.1 is the standard and fits the film well. The heavily jazzy soundtrack sits nicely in the side channels while the dialogue is crisp throughout.  The Blu-ray disc houses the extras which include: Everything Else We Shot (deleted scenes), Prison Cats, On Filmmaking,  31 Wake-Ups, Photo Gallery, Theatrical Trailer, Joining the Hunt and Audio Commentary by David Lowery.  While informative, a few of the extras are odd, to say the least, and I, for one would have liked the Joining the Hunt Feature to be longer as I wanted to learn more about the real "over the hill" gang.

Redford picked a strong project to be his swan song and Lowery made sure he rode off into the sunset with dignity and flair.  An enjoyable film, The Old Man and the Gun is worth an hour and a half of your time.

For more information about The Old Man & the Gun visit the FlickDirect Movie Database. This release has been provided to FlickDirect for review purposes. For more reviews by Allison Rose please click here.

The Old Man & the Gun images are © Fox Searchlight Pictures. All Rights Reserved.