Hays and Hagerty had great chemistry that made their story believable. 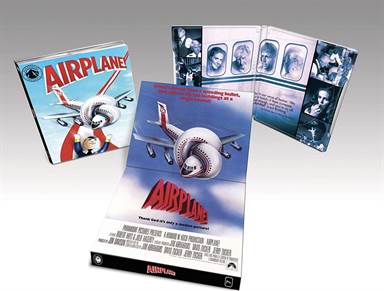 Paramount Presents, the film giant's attempt to bring back classic movies that had significantly contributed to the culture of their time, has already offered a number of fabulous and noteworthy films.  From Elvis Presley (Jailhouse Rock) portraying a waiter/would-be singer in King Creole to groups of teens representing their peers in Pretty In Pink, and Clueless, this new endeavor brings together timeless films with terrific technology to create Blu-rays, some for the first time, that appeal to a vast array of audiences.  The most recent movie to be a part of this new collection is the 1980's ZAZ written and directed movie, Airplane!

Ted Striker (Robert Hays; Superhero Movie) was a fighter pilot during the war but was left traumatized, is unable to fly anymore, became a taxi driver, and has developed a "drinking problem" (he can't drink anything without splashing liquid on his face).  His wartime girlfriend, Elaine (Julie Hagerty; Marriage Story) is tired of his issues and breaks up with him but Ted won't let her go so he buys a ticket on the flight she is working – she's a flight attendant – so he can try and win her back.  Elaine, however, isn't interested in reconciling.

After the mid-flight meal is served (yes they still did that back in the '80s) several of the passengers become ill and it is determined they have food poisoning.  Unfortunately, the pilot and co-pilot also ate the meal and end up sick as well.  Elaine contacts air traffic control who helps her engage the autopilot but tells her the autopilot can't land the plane.  She then, along with Dr. Rumack (Leslie Nielsen; The Naked Gun: From the Files of Police Squad!), convince Ted to land the plane.  Air Traffic Control contacts Ted's former commanding officer, Captain Rex Kramer (Robert Stack; 1941), a commercial pilot, to talk through the landing. As the weather worsens Ted has a panic attack but manages to land the plane and win Elaine back in the process.

What is one of the most interesting parts of this movie is that the majority of the cast were not traditional comedic actors.  Stack and Nielson were known for their dramatic roles, but they turned out to be hilarious.  Hays and Hagerty had great chemistry that made their story believable. The rest of the actors were well cast making for a complete ensemble that helps to make the film work.

The 1080p video is taken from a brand new 4K transfer which gives the movie a new quality and feel.  Saying the picture is clean and sharp is an understatement as the Airplane! Blu-ray is truly an upgrade.  The DTS-HD master audio 5.1 is the same found on previous releases so, while it is crisp, it doesn't add anything new.  This release also removes some of the extras from previous versions.  The extras on the Blu-ray include: Audio Commentary, Isolated Score Track, Filmmaker Focus: Writers/Directors Jim Abrahams, David Zucker and Jerry Zucker on Airplane!  And Q&A with The Directors of Airplane!

While sophomoric, juvenile and silly, Airplane! works precisely for those reasons.  By using a cast made up of mostly dramatic actors, the lines are delivered deadpan giving them more weight and therefore making what they are saying even funnier than if the delivery had been different.

Airplane! celebrates their 40th anniversary this year and if Paramount Presents is a sort of "time capsule" of great cinema then it is only right that this movie be included as an example of what can happen when the comedy is done right. Included on a number of greatest comedic film lists, Airplane! is one of those movies where everything comes together and simply works.

Download Airplane! in Digital HD/4K from the iTunes store.

For more information about Airplane! visit the FlickDirect Movie Database.