For those who remember and loved Wayne’s World doing its heyday, this is a nostalgic stroll down memory lane when they were also in their heyday. 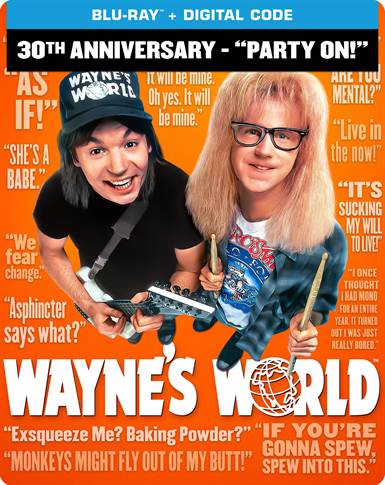 In October 1975, NBC debuted a ninety-minute comedy skit show called NBC's Saturday Night.  The cast, made up of seven actors, were called the "not ready for prime-time players" and included Laraine Newman (Problem Child 2), John Belushi (The Blues Brothers), Jane Curtain (3rd Rock from the Sun), Gilda Radner (Haunted Honeymoon), Dan Aykroyd (Ghostbusters), Garrett Morris (Ant-Man), and Chevy Chase (Caddyshack). Over the next forty-six years, the show has launched numerous careers and even more characters.  One of the many famous sketches from the late 1980s became so popular that five years later it was made into a feature film, Wayne's World.  February 1st, in honor of the thirtieth anniversary of the movie's release, Paramount Pictures is issuing a special edition Blu-ray steelbook.

Wayne Campbell (Mike Myers; Austin Powers: International Man of Mystery) and his best friend Garth Aglar (Dana Carvey; The Master of Disguise) live in Aurora, Illinois, and host a public access show, from Wayne's parents' basement, called Wayne's World.  One day television producer, Benjamin Kane (Rob Lowe; St. Elmo's Fire) stumbles across the show and signs Wayne and Garth to a contract to produce their show with Noah's arcade sponsoring it.  However, when Wayne and Garth discover the changes that were made, they defy Benjamin causing Wayne to be fired. Adding insult to injury, Wayne gets mad at his girlfriend, (Tia Carrere; True Lies) when he tells her that Benjamin is trying to date her, and she breaks up with him.

There are so many memorable skits and characters that came out of Saturday Night Live (SNL), but few have made the leap from small screen to the big screen.  When it was released in 1992, Wayne's World was a big box office draw that earned mostly favorable reviews from Critics. Myers and Carvey became even bigger celebrities than before, and the movie basically became a breakout role for Carrere.

This latest edition of the Blu-ray is the same as previously released versions.  The video quality is decent with its 1080p resolution and 1.78:1 aspect ratio.  The details are fine and there isn't really any graininess, but nothing stands out as being superior either. Anyone watching the disc on a high-definition television will be able to see the CGI and special effects used since today's technology is clearly more advanced.

The Dolby TrueHD 5.1 audio fairs slightly better on a surround sound system with the dialogue and ambient noise either filling numerous speakers or dissecting them down to one based on the location of the sound.  It makes one wonder what the video/audio might look and sound like if it had gone through the restoration process.  The only extras included are the audio commentary from director Penelope Spheeris (Suburbia) and Extreme Close up, both of which were previously released.  The only new thing about this version of the Blu-ray is the steelbook itself.

Wayne's World is not my kind of humor, so I went into the viewing at a deficit and can count on one hand the number of times I laughed out loud (as opposed to my husband who was cracking up often).  The film also doesn't hold up well and is obviously dated.  From the clothing, hairstyles, jokes, and pop culture references, this movie screams the late1980's and wouldn't resonate with today's young adult audiences.

For those who remember and loved Wayne's World doing its heyday, this is a nostalgic stroll down memory lane when they were also in their heyday.  However, if those same individuals already own a copy of the previously released Blu-ray, this one doesn't offer anything that they haven't already seen, except the steelbook repackaging.

For more information about Wayne's World visit the FlickDirect Movie Database. This release has been provided to FlickDirect for review purposes. For more reviews by Allison Rose please click here.