Bardem offers audiences an opportunity to see a whole other side of himself. As a dramatic actor he can move an audience but as a singing and dancing comedic actor he surprises viewers with how good he can be. 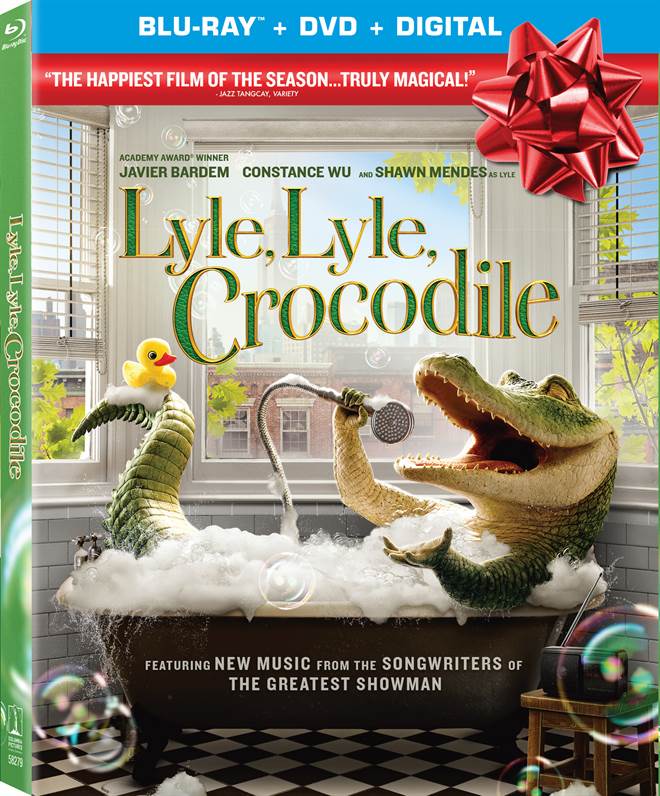 Over the years there have been films about performing and/or talking animals but a singing crocodile? Would that really work?  Well...why not? First, make the large, green creature timid and sweet, give him a fantastic voice, and finally, throw in some original songs by one of the best music writing teams in the last decade.  That is the formula for a great movie and the idea behind this year's Lyle, Lyle, Crocodile.  With a terrific cast, upbeat, pop tunes, excellent visual effects, and a teen idol, pop star (Shawn Mendes) to be the "voice" of Lyle, the movie was bound to be successful.  This week, after a long theatrical run, Lyle, Lyle, Crocodile comes to home entertainment on 4K, Blu-ray, and DVD.

Discovered in a cage in the back of an exotic pet store, the singing crocodile was given the name, Lyle,  by his new owner, Hector P. Valenti (Javier Bardem; No Country For Old Men).  A showman by trade, Hector sees Lyle as an opportunity for fame and fortune.  However, after training and practicing for their big audition, Lyle suddenly has a case of stage fright and can't perform.  Having put his house up as collateral, Hector is forced to leave Lyle alone in the attic while he tries to make some money.  While Hector is gone, a new family movies into the house with no idea that there is a giant, singing crocodile living upstairs.

Bardem offers audiences an opportunity to see a whole other side of himself.  As a dramatic actor, he can move an audience but as a singing and dancing comedic actor he surprises viewers with how good he can be.  Constance Wu (Crazy Rich Asians) also reinvents herself showcasing her theater background by dancing and singing right alongside a crocodile.  Winslow Fegley (Come Play), young brother of August and Oakes, is very good as the young boy who discovers Lyle in the attic and befriends him.

Unlike many CGI characters, Lyle looks outstanding in 1080p resolution.  It is obvious the time and care was taken to create him was worth all the effort as his CGI presence doesn't appear to distract the view in any way, shape, or form.  The color palette is bright and abundant enticing younger audiences to want to watch it over and over again.

While the visuals are excellent, the DtS-HD Master Audio 5.1 doesn't fare quite as well.  Mendes has a distinct vocal sound and quality and most of the time that shines through, but there are one or two songs that sound muffled.  Otherwise, the dialogue and music are of decent quality offering much of what one would expect from this level of film.

There is a small amount of supplemental material and some are with watching, others could be watched once and be done with them.  Extras include: Sing-Along Songs, Storytime with Shawn Mendes & Javier Bardem, Deleted Scene, Croc and Roll Take a Look at Us Now -The Cast, and Music Videos

Based on a children's book, Lyle, Lyle Crocodile was a solid choice to adapt to film and today's technology allows for creating something entertaining without looking cheap.  Of course, it doesn't hurt to have the current 'it' musical team of Benj Pasek and Justin Paul (The Greatest Showman) to pen some original songs for the film.  They are known for more upbeat, pop-sounding fare, and the songs in this movie are more of the same.  And when you have Shawn Mendes lending his vocal talent to that mix, you end up with a winning soundtrack that audiences could sing along with.

If you have young children at home, this is a no-brainer - go out and buy it today.

For more information about Lyle, Lyle, Crocodile visit the FlickDirect Movie Database. This release has been provided to FlickDirect for review purposes. For more reviews by Allison Rose please click here.