Finding that perfect stride during a comedy movie is never easy and many times what looks good in a trailer doesn't always flesh out well when seen for the first time on the big screen. 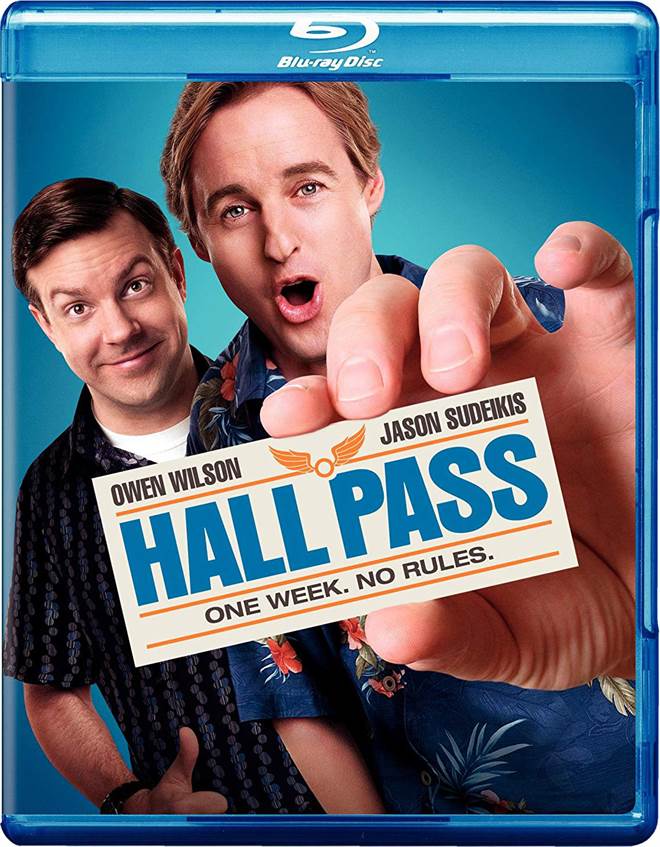 The idea of marriage is always a fun topic to discuss especially through the medium of film. That is the subject behind Hall Pass, the latest film from the directing team of the Farrelly brothers. The movie follows the exploits of Rick and Fred, played by Owen Wilson and Jason Sudeikis, who are two friends that receive "hall passes" from their wives to go out and soil their oats for one week.

The film opens with a glimpse into the lives of Rick and Fred, two best friends whose wives Maggie (Jenna Fischer) and Grace (Christina Applegate) also happen to be best friends. Both Rick and Fred are your typical husbands, settled into their lives of marriage but longing for the days when they had wild sex. Both of them are unhappy with their sex lives and after they are caught on tape bad-mouthing some women at a cocktail party their wives decide they have had enough. Both women decide to give them a "hall pass"; a week off from marriage in which they can have sex with whomever they like.

They are skeptical at first but ultimately accept their offer and check into a motel for a week while their wives head up to Cape Cod to visit Maggie's parents. Now that their wives are away they feel it is their time to shine and on their first night out they go out to eat before heading to the bar but wind up becoming too tired from overeating and spend the rest of the night at the motel. Day two finds them on a golf course. In the spirit of freedom, they decide to eat some pot brownies and wind up becoming so high they wreak major chaos on the golf course.

As the week wears on its becoming clear that neither man has any clue about how to go about picking up women, and at most they are "all talk". Finally, things seem to change as Rick has a flirtatious moment with a waitress at a local coffee shop. She seems interested in him and invites him out for a drink later on. The next day Rick and Fred meet up with their friend Coakley (Richard Jenkins) who, regardless of his age, still knows how to party. They go to a club and while there Rick bumps into the waitress. They find themselves back at Coakley's house later that night but when push comes to shove Rick is unwilling to seal the deal, opting to stay faithful to his wife.

Fred on the other hand finds himself back at the motel that same night with the aunt of Rick's babysitter and they wind up having sex as Rick discovers when he walks in on them. As the events of the week draw to a close Rick and Fred must decide if staying with their wives is what they want or do they wish to return to their single lives.

Given the subject matter, you would think that this would be grounds for a hilarious movie, but somehow the movie is never able to find its niche. That is partly because of the casting here, Owen Wilson was never much of a comedian, he was always better when cast next to someone who can be funny. In this film, that role is in the hands of Jason Sudeikis and while he has proven himself funny he can only do so much when the material itself lacks comedic power. Now the film arrives on Blu-ray DVD and surprisingly contains only a few extras.

It is a two-disc set, the first disc containing a digital copy of the film. Disc two holds the theatrical version of the film as well as an extended cut. There are only two special features; the first is a deleted scene pertaining to the part of the film where we first meet Coakley and the second is a gag reel.

Finding that perfect stride during a comedy movie is never easy and many times what looks good in a trailer doesn't always flesh out well when seen for the first time on the big screen. The trouble with Hall Pass wasn't that it didn't contain humor but that it didn't make you laugh.

For more information about Hall Pass visit the FlickDirect Movie Database. This release has been provided to FlickDirect for review purposes. For more reviews by Eric English please click here.

Chris Rebholz
Hall Pass won't have the lasting effect that a movie like The Hangover will, mainly because it lacks one main ingredient: humor.
Full Review | Grade: C