Gangster Squad so desperately wants to rub shoulders with The Untouchables, L.A. Confidential and the classics of Gangland cinema, but it isn't in the same league. 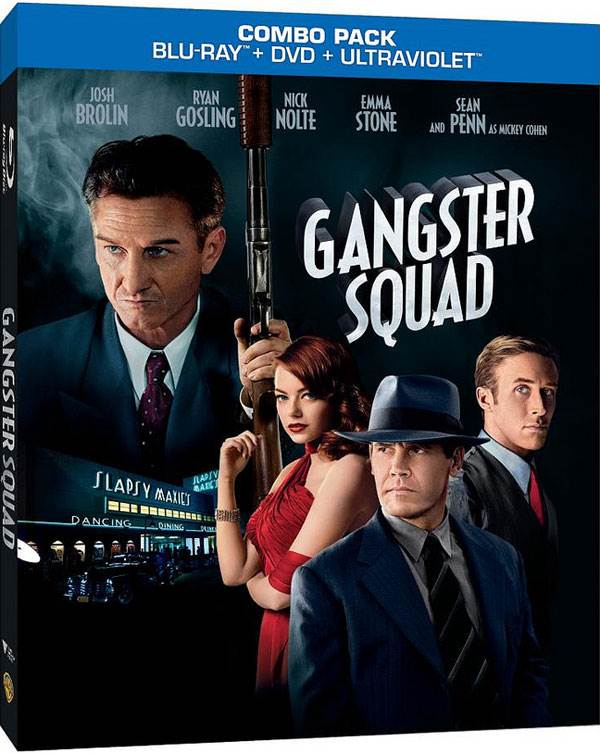 Gangster Squad hinges on violence and little more, and with it comes an odd, slack-jawed silliness. The film aspires for Untouchables greatness but bumbles all the elements that make Brian De Palma and David Mamet's 1987 crime drama great. It longs to be L.A. Confidential but falls closer to The Black Dahlia. It desperately paws at the classics of '30s and '40s gangster cinema, hoping to reinvent and reinvigorate while mounting something more akin to a furrowed-brow parody instead. And it takes its aforementioned silliness way too seriously. It isn't a bad film, just a terribly unremarkable one; more memorable for the notorious sequence it lost than anything it has to offer.

"Every man carries a badge. Some symbol of his allegiance. His were the scars of a boxer who'd used his fists to climb the social ladder of the mob. A Jew who'd gained the respect of wops through a homicidal lust. He'd sworn an oath of violence. And his master? His own insatiable will to power. He wanted to own this town... His name is Mickey Cohen."

Cue Penn's gristled mug turning toward the camera in slow motion. His eyes burn. It's the most subtle beat of Penn's performance, an over-the-top, passive-aggressive eruption of criminal id that would make even Al Pacino raise an eyebrow. Before long, Spicoli's pounding his finger into a table at a crowded restaurant, barking "This isn't Chicago! This is the Wild f---ing West! You heard of Manifest Destiny? That's when you take what you can when you can. The greasers took it from the redskins and we took it from them. And I'm gonna take it all from you, Jack! And not just because I can, but because this is my destiny! Los Angeles is my f---ing destiny, you motherf----er!" Penn is suddenly a bloodthirsty, R-rated Dick Tracy villain, swollen prosthetic nose and all. His Cohen isn't a streetwise mobster. He's a force of unhinged, f-bombing nature, and every scene he graces serves one purpose: to remind the audience just how much of a monster Cohen is. Gangster Squad isn't really about the do-or-die squad at all, even though Gosling and company get far more screen time. It's an early '90s Batman flick hell bent on building up the threat that is its colorful Big Bad rather than dissecting the Everymen willing to sacrifice their lives to put a madman out of commission.

Director Ruben Fleischer runs through the Everymen motions, though, peeking into O'Mara's family life, the squad's paint-by-numbers dynamics and, of course, the romance between Gosling's Wooters and Stone's Grace Faraday. Their love story is a messy, unnecessary diversion that nearly hijacks the film. Poor Gosling and Stone are forced to wade through the increasingly ludicrous affair without any help either, chewing up cringe-inducing gangland dialogue and spitting it out to no avail. Worse, their screen chemistry is DOA, which will come as quite a shock to anyone who fell for Jacob and Hannah in Crazy, Stupid, Love. Brolin and the rest of Gangster Squad's Tinseltown squad aren't much better, dutifully gnawing on Will Beall's quasi-pulp script without a lot to show for it. Again, style trumps substance as cliché after cliché, genre convention after genre convention, are bled dry. If it isn't a mob movie quip you've heard a dozen times before, it's a chase or shootout you've seen played out a hundred times over. Despite all the gore, all the muzzle flashing, all the retro-noir sizzle, the results are inexplicably and unmistakably familiar. And ordinary.

Gangster Squad's 1080p/AVC-encoded video transfer looks every bit as good as a recent theatrical presentation should. Shadows hang heavy, and colors are often doused in darkness and richly saturated. Even so, primaries pack real heat (reds in particular), skin tones are warm and beautifully saturated, black levels are impeccably deep and contrast, though rather stark at times, never falters. Warner's DTS-HD Master Audio 5.1 surround track is as perfectly suited to the job, no matter how dirty it gets. Low-end output is more violent than the film itself, transforming every gunshot into a shotgun blast and every shotgun blast into a thunderclap.

Special Features and Extras include:

There'll be those who wholeheartedly enjoy Gangster Squad. Then there will be those who'll be ready to pull the trigger before it even starts killing everything that moves; those dissatisfied with its endless clichés and tough guy melodrama, unimpressed with its script and performances, and disappointed that a movie with a cast this talented failed to put them to good use. It so desperately wants to rub shoulders with The Untouchables, L.A. Confidential and the classics of Gangland cinema, but it isn't in the same league, much less the same sphere. Warner's Blu-ray release, on the other hand, gets just about everything right. Regardless of whether you love or hate the film, its video transfer is terrific, its DTS-HD Master Audio 5.1 surround track is a show-stopper and its supplemental package has plenty of extras to go around. At the very least, a rental is in order.

For more information about Gangster Squad visit the FlickDirect Movie Database. This release has been provided to FlickDirect for review purposes. For more reviews by Chris Rebholz please click here.