The Wolverine Is A slicing story that needs an edit and a more innovative ending. 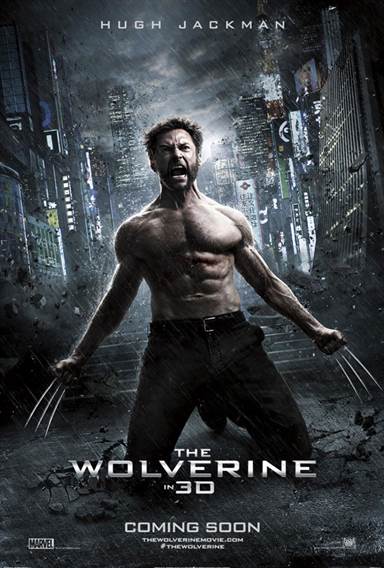 Purchase   DVD/Blu-ray/4K UHD
Aggressive Samurai martial arts fighting takes the stage as The Wolverine moves into theaters this weekend. And with the return of Hugh Jackman as the man with the adamantium claws in this new chapter Marvel pushes the envelope by taking the action to Japan where it's Logan versus Ninjas. More of a story driven comic book thriller, the twists and turns are set ups to some amazingly choreographed fight scenes and a train ride that outdoes Spider-man 2's out of control centerpiece.

The intriguing storyline finds Wolverine (Hugh Jackman) in a prison well where he's held by Japanese guards during World War II Nagasaki, Japan.  He has mastered the bone spikes that protrude from his knuckles to climb the well and see out where the guards are posted.  On this one day he sees American bombers approaching the island and chaos in the encampment.  Just when Yashida (Ken Yamamura) one of the guards attempts to kill himself, Wolverine stops him.  When an unexpected blast blows the two into the well a bond begins that will return Wolverine to Japan some 50 years later.

The story gets threatening when Wolverine meets up with Yukio (Rila Fukushima) in Alaska and she convinces him to meet with Yashida who is now a billionaire with holdings in Tokyo.  Director James Mangold leads his audience into danger as his wily Wolverine finds the man he saved on his death bed and the family including his granddaughter Mariko (Tao Okamoto) hovering like vultures over the dying man.  Keeping the film almost devoid of action for the first 35 minutes, the buildup rises to a much needed climax with the first dominant action at a funeral, a visual feast of slicing and dicing with Samurai swords.

Mangold does a Hitchcock moving his characters around the motion picture stage in a stealthy game of chess as they make their way across Japan creating fights and fleeing an army of Ninjas hell bent on taking Wolverine down. He smartly includes one of the best CGI laden action scenes in recent times involving a fight atop a 300 mile per hour bullet train that will awaken anyone who has been dozing.  This instant classic thrill-ride out does the clash aboard a speeding subway in the film Spider-Man 2 (2004) versus Doc Ock.

Of course rolling over in bed and seeing the lovely face of Famke Janssen as Jean Grey is a nice surprise and Mangold uses the scenes to center Wolverine and control his anger.  He introduces of a different kind of mutant, Viper played by Svetlana Khodchenkova who spews poison at her victims and offers a new adversary to create a lot of havoc.  Both characters are nice to have in the film, but they are only window dressing in this male dominated Ninja brawl.

There's more that's not hunky-dory in The Wolverine however, including a yawning induced love story that never really fleshes out nor needed in the first place.  With a good bit of creative carving, the film could be shrunk to a more enjoyable 105 minutes, especially when you also exclude the teeth grinding lull that features the chopping of a fallen tree. That said, the wasted scenes are not a deal breaker and I'm still a fan of the Marvel hero that as far as I'm concerned leads the band of X-Men.

The Wolverine has been rated PG-13 by the MPAA for sequences of intense sci-fi action and violence, some sexuality and language.

FINAL ANALYSIS: A slicing story that needs an edit and a more innovative ending. (C+)

Purchase a DVD/Blu-ray/4K UHD physical copy of The Wolverine today at Amazon.com

Download The Wolverine in Digital HD/4K from the iTunes store.

For more information about The Wolverine visit the FlickDirect Movie Database.

Read More Reviews For The Wolverine