Say goodbye to the cigar chomping, quipster Wolverine in The Wolverine. This is a much more tamped down enterprise, for better or worse. 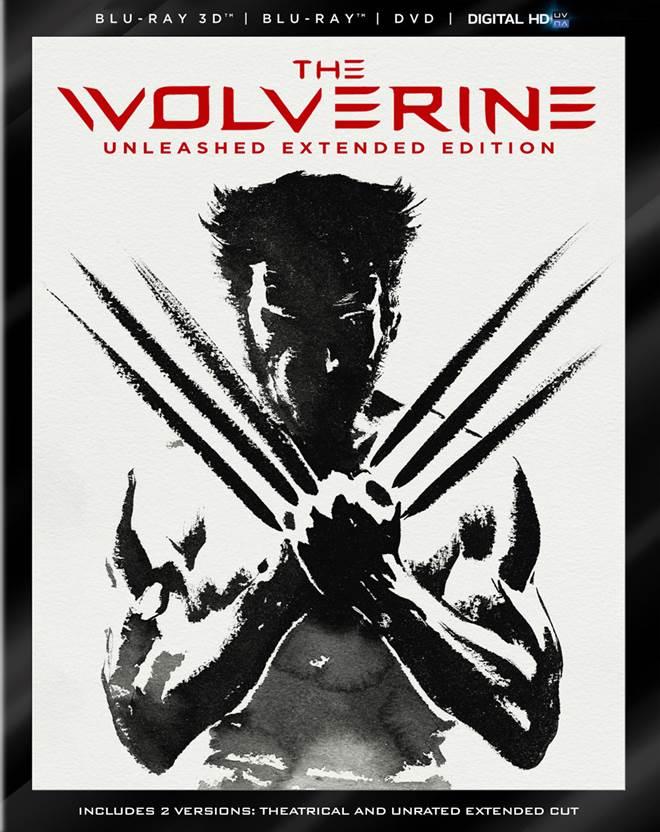 Purchase   DVD/Blu-ray/4K UHD
What is it with superheroes these days, anyway? One might think they wouldn't have a whole bunch to complain about, what with their superpowers and everything, and yet more and more films about our favorite good guys tend to wallow in supposedly intense psychological introspection, where moodiness has replaced any simple formulation of a valiant soul fighting for truth, justice and the American Way (or something like that). It's notable that this latest iteration of Marvel's Wolverine character seems to have taken a page from the recent glut of "reboots" like Christopher Nolan's The Dark Knight Trilogy or this year's Nolan produced Man of Steel. And yet it's just as notable to realize that the X-Men franchise has always trafficked in introspection more than the typical superhero outing. After all, mutants by their very definition are different (something that Man of Steel sought to exploit to varying effect). That may in fact be one reason why X-Men Origins: Wolverine met with a fair degree of withering critical response, for it seemed to divorce the character, at least in part, from his troubled psychological underpinnings, delivering instead a more or less straight ahead live action. The Wolverine may have been marketed as a balls to the wall action spectacular, but it's actually more of a character piece, albeit a character piece with an adamantium skeleton. The film plays up Wolverine's torment over the loss of Jean Grey (from X-Men: The Last Stand), while also investing the character with a rather complicated backstory hinging on his imprisonment during World War II in a Japanese concentration camp. Wolverine's innately heroic tendencies actually come back to haunt him years later, when a man he helped to save in the camp turns out to have designs on one of Wolverine's most alluring powers—his ability to regenerate, healing himself from any wounds or illness, giving him something approaching immortality.

As The Wolverine begins, Logan (Hugh Jackman) isn't just suffering from nightmares—he's suffering from nightmares within nightmares. The first of these traces back to the waning days of World War II, when Logan is interned—or perhaps more precisely, interred, since he's being kept in a gigantic metal cylinder beneath the ground —at a Japanese prisoner of war camp. A Japanese soldier named Yashida (Ken Yamamura) sees the figurative handwriting on the wall, as it's spelled out by the contrails of B-29s delivering the atom bomb to Nagasaki across the bay. While his colleagues commit hari-kari, Logan suddenly has emerged from the supposedly inescapable cell, gets Yashida to safety and protects him from the nuclear blast with a metal shield. Yashida is stunned to see a badly burnt Logan revitalize before his very eyes. As if that nightmare weren't enough, Logan "wakes" from that with a start, to find himself lying next to Jean Grey (Famke Janssen), who of course supposedly expired in X-Men: The Last Stand. The two share a little pillow talk until Logan realizes that he has once again let his claws get out of hand (sorry for the pun), piercing and killing Jean. Finally, Logan really wakes up, though in this particular case he looks like a nightmare—he's an unkempt, haggard mountain man, living out of doors with scraggly hair, an overgrown beard and an apparent lack of personal hygiene.

Logan has made a vow to Jean to never again harm anyone with his adamantium "extensions", but he can't help himself after he comes across a huge bear that's been poisoned by a thoughtless hunter. Logan tracks him down and is about to deliver a major dose of justice, when a mysterious red haired Japanese woman who has been trailing him shows up and tells him not to waste his time, since all of the idiots in the place, including the hunter, will soon be dead from various causes. The hunter and his cohorts don't react well, but instead of Logan taking them out, the young lady does with some great martial arts moves and a few quick slices from her ritual katana. She invites Logan out to her car, where it turns out that she is a precognitive in the employ of the now elderly Yashida. Yashida is dying, and he wants Logan to come to Japan so that Yashida can thank him personally for having saved his life all those years ago.

The red-haired katana wielder is named Yukio (Rila Fukushima), who delivers Logan to Yashida's lair, where Logan is soon embroiled in some corporate intrigue involving the aged and mortally ill Yashida (now played by Haruhiko Yamanouchi), Yashida's scheming son Shingen (Hiroyuki Sanada), and Shingen's attractive daughter Mariko (Tao Okomoto). The elder Yashida's motives in getting Logan over to Japan turn out to not be entirely noble, and in fact he wants to barter in a manner of speaking with the man who once saved him. If Logan will impart his miraculous healing powers to Yashida, that will deprive Logan of his immortality, supposedly freeing him from the vampire-esque dolor of never growing old and seeing everyone around him age and die. Logan, while perhaps intrigued, declines the offer, but (initially) unbeknownst to him, Yashida's doctor, an elegant blonde named Green (Svetlana Khodchenkova) decides to take matters into her own hands.

It's at this point that The Wolverine veers perilously close to self parody, as Logan and Mariko find themselves on the receiving end of a Yakuza rampage in one of the first battle scenes of the film. That in turn sets up what is arguably one of only two big set pieces (three if one counts the nuclear bomb sequence which begins the film) that The Wolverine offers to action hungry audiences, a spectacular sequence set atop a speeding "bullet train" where Logan attempts to take out a bunch of Yakuza henchmen who are after Mariko. The two manage to evade her putative captors and escape to an isolated seaside home in Nagasaki, where the two fall in love despite Logan's predilection for having dreams about Jean. Mariko's eventual capture sets the film careening into its hyperbolic third act, where Yukio reenters the story, having had a premonition that Logan is about to meet his demise. She signs on as the hero's "bodyguard."

The Wolverine ends up being a rather odd entry in the X-Men franchise. It's obvious that the creative staff wanted to get away from what was perceived as a disappointment in the previous "origin" story given to the character, but they also can't help but include even more backstory in this outing. What's increasingly odd about this entry is its reliance on Japanese mythologies, including ultimately a gang of ninjas and a gigantic samurai mecha which itself could have been ported over from any given anime enterprise. The film is surprisingly low key, with only the aforementioned bullet train sequence and Logan's final showdown with a not very surprising arch- villain as the "knock 'em, sock 'em" aspects. The film obviously wants to set Logan up for a reentry in the superhero sweepstakes after his self-imposed exile (make sure to stay tuned during the closing credits sequence for a little setup for the upcoming film), but that ultimately makes The Wolverine something of a transition film where it can seem like the character is biding his time—while working through all sorts of inner turmoil—before he can enter the mutant fray once again, supposedly with a coterie of colleagues helping him out.


There's quite a bit to like in The Wolverine, including Jackman's world weary demeanor throughout most of the film. And director Mangold, who proved his action mettle in Knight and Day, stages the (few) action sequences with considerable flair. Oddly, the most charismatic performance turns out to be by Fukushima as Yukio. Though she's a bit hard to understand at times, her expressive eyes and slyly humorous manner invest the role with a lot of spark and energy, something this curiously tamped down offering otherwise labors fitfully to consistently achieve.

The Wolverine slashes its way onto Blu-ray with an AVC encoded 1080p transfer in 2.40:1 from 20th Century Fox Home Entertainment. The Wolverine boasts a gorgeously sleek and well defined image; the bulk of the film features a natural looking palette with extremely well saturated color. The opening Nagasaki sequence is tinted to a suitably late summer amber color, while Wolverine's exploits in the Yukon are cool blue. Later, when Logan gets to Japan, a seminal moment in Yashida's compound is similarly blue tinted. Fine detail is exceptional throughout this presentation, offering beautifully precise renderings of things like Mariko's finely textured kimono or the henna red strands of Yukio's hair. This DVD also came with a 3D version as well and while it does add a little entertainment to the viewing, it's hard to feel the full impact of what 3D has to offer watching it at home. The notion of having the option of 3D to watch on your TV is a little lost on me. While I do understand any studio's desire to cash in on the latest fad, this one seems a bit much to me and I am still dumb founded any time I see a Blu-ray with the words 3D attached to the title. The Wolverine's lossless DTS-HD Master Audio 7.1 mix is one of the best examples of total—and at times smart— immersion in recent memory. What may shock some listeners is the relative lack of "oomph" at the first expected moment— when the atom bomb hits Nagasaki, but there's a low frequency rumble that soon builds to impressive proportions, quelling any doubt that this is going to be a very forceful and aggressive mix. But even better than that obvious approach are some very subtle touches. Listen, for example, in the Yukon scene when Logan traipses through the woods with a grizzly bear walking nearby. The occasional "caws" of crows are brilliantly placed around the sound field, as is the crunch of the ground under both Logan's and the bear's feet. Later, when Mariko's erstwhile lover, now a ninja, shoots arrows to and fro, there's a fantastic "whoosh" that zings through the soundstage and may provoke an involuntary "duck" response.

Special Features: Say goodbye to the cigar chomping, quipster Wolverine in The Wolverine. This is a much more tamped down enterprise, for better or worse. Action fans may come away from this film (in any of its versions) wondering if there was enough "there." but the film, while patently odd at times, benefits from strong, sure performances and one incredibly visceral thrill ride on top of a speeding bullet train. The Wolverine may ultimately be seen as a kind of cinematic placeholder, a virtual calm (more or less, anyway) before what may be the storm of X-Men: Days of Future Past. That aspect may wear on some fans' patience, but the good news is it seems Logan is poised for battle once again by the end of this film. This Blu-ray sports exceptional video and audio and comes with some appealing supplements. Recommended.
Cast:
Directed By:
MPAA Rating: PG-13

For more information about The Wolverine visit the FlickDirect Movie Database. This release has been provided to FlickDirect for review purposes. For more reviews by Chris Rebholz please click here.

The Wolverine images are © 20th Century Fox. All Rights Reserved.

John Delia
The Wolverine Is A slicing story that needs an edit and a more innovative ending.
Full Review | Grade: C