2 Guns Is A hot summer action winner with a dream cast. 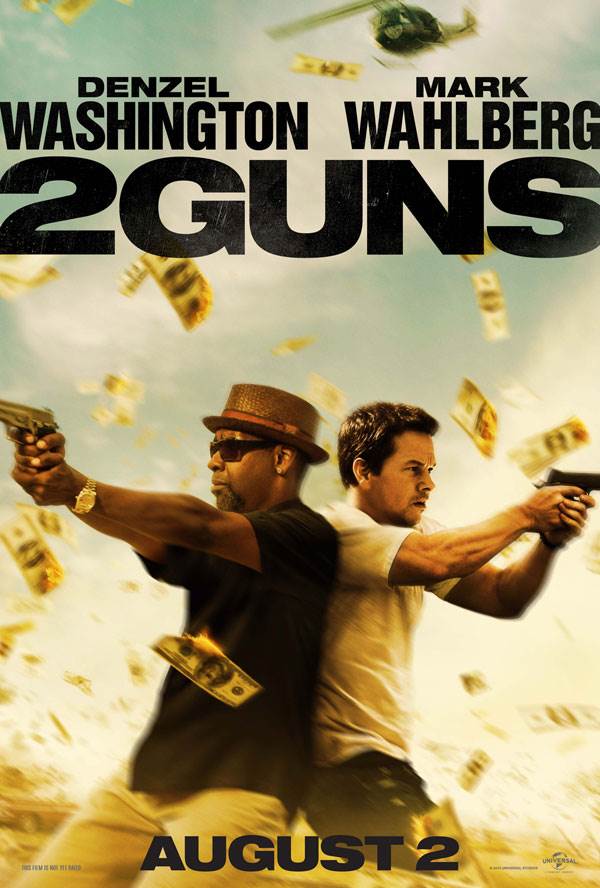 Purchase   DVD/Blu-ray/4K UHD
The teaming up of Denzel Washington with Mark Wahlberg turned out to be a good choice as the action boys in 2 Guns.  Under the direction of Baltasar Kormákur the two are quarrelsome, rough yet their interplay deals out plenty of comedy with this terrific crime action thriller. If you enjoy watching films like Safe House and Contraband rush out to see the boys dealing with the bad guys in 2 Guns.

The film based on a graphic novel opens with Bobby Trench (Washington) and Marcus "Stig" Stigman (Wahlberg) pulling into a diner for a cup of coffee.  "Never rob a bank across from a diner that has the best donuts in three counties" says Bobby. Stig walks into the diner and Bobby goes to the bank across the street and cases it out.  When Bobby returns to the diner, Stig goes into the men's room and all hell breaks loose when a fire breaks out.

The story flashes back a short time period and we find the two pulling into a Mexican compound and the home of Papi Greco (Edward James Olmos) the most notorious drug dealer in the country.  Bobby meets with him in private and hands over a pile of passports and asks for the drugs.  Papi feels Bobby may be a narc so he gives him a huge amount of cash for the passports instead.  The deal gets tense and Bobby walks away without the money or the passports to show his loyalty. So starts a tense cat and mouse thriller of double crossing that will put Bobby and Stig in mortal danger on their way to completing a crime that puts the boys in the right place steeling the wrong treasure trove.

The action and misjudgments are comical at times with Denzel and Mark getting in and out of danger.  Always on the run from both the law and a drug lord the top acting talent in the business show why people are asking for more. Director Kormákur works his actors to the bone with a lot of harrowing stunts that push the danger level to near breaking point.  He even turns them against each other and when these two personalities clash there's a lot going down.

I especially liked the scene where Bobby and Stig chase each other in a pick-up truck versus a Ford SUV, oh if you saw the trailer you already know what I mean. That's my cue to tell you to avoid the trailer because there's way too much information and plot giveaways may ruin it for you.  It's best to go and get surprised by the storyline with all its twists and turns. I recommend the film to those who are action junkies, love fast moving crime films and especially if you are fans of Denzel Washington and Mark Wahlberg.

The support actors in the film are top drawer with Edward James Olmos playing the dangerous Pepi, Bill Paxton (yes smooth talking Bill Paxton, but here he's the most terrifying man on the planet) as Earl a CIA agent, and James Marsden (yes the handsome actor from Enchanted) who makes his character Quince the most evil double dealing member of the U.S. Navy.  Director Kormákur puts the men through their paces while they cause a lot of havoc and chaos at every turn right up to the ending standoff.

2 Guns has been rated R by the MPAA for violence throughout, language and brief nudity. Be cautious when deciding to allow anyone under the age of 17 to see the film as it does have some scenes that may be inappropriate.

FINAL ANALYIS: A hot summer action winner with a dream cast. (B)

Download 2 Guns in Digital HD/4K from the iTunes store.