In the minds of dogs lovers around the world John Wick is a superhero and champion for our four legged friends everywhere. 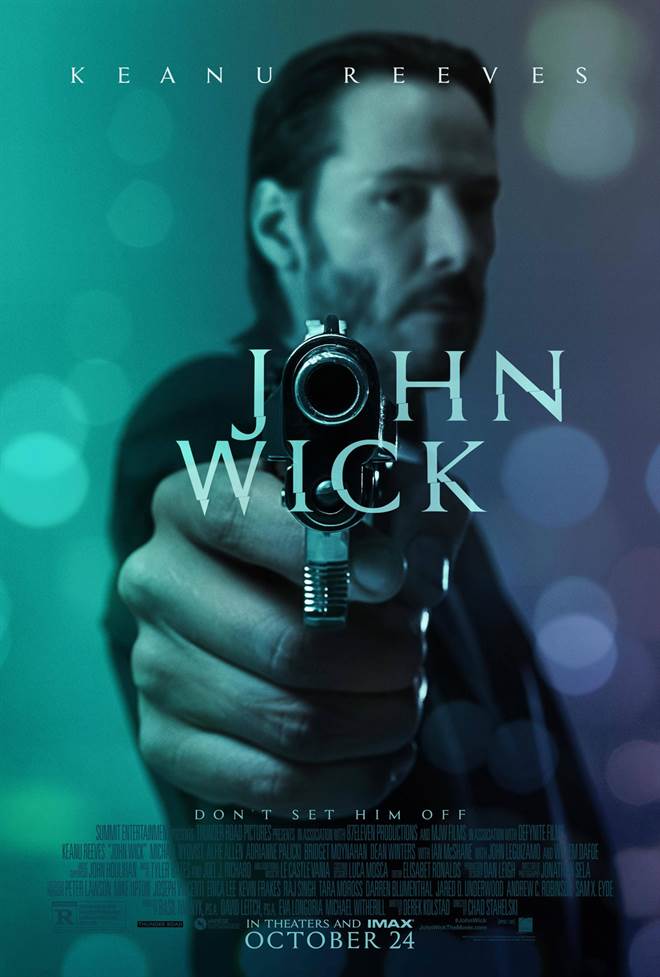 Keanu Reeves has had a very turbulent career. It first started out in mainly comedic and dramatic roles. Then his first big action role was staring as Johnny Utah in Point Break alongside Patrick Swayze (Red Dawn, Dirty Dancing). This was followed up with smash hit Speed, and finally his most well know action films, The Matrix Trilogy. After that things got a little weird. Keanu worked on some big-budget films that didn't draw an audience and Hollywood forgot about him. Now with the independently made John Wick film, picked up by Lionsgate, he will hopefully be back on Hollywood studios radars

John Wick is a simple revenge story. Retired hit man's wife passes away and leaves him a puppy as a dying gift.  Said puppy is killed by a sadistic car thief and the hitman goes on a killing spree to avenge said dog.

So what makes this simple story an amazing film? For starters, Keanu Reeves is back on the top of his game. His acting is top-notch, as the audience feels like they are riding the same emotional rollercoaster that John Wick is throughout the film.  It is almost as if he has not skipped a beat since his action days.  John Wick is so fleshed out by Keanu that you know every little thing that makes him tick.

Add to the mix an amazing supporting cast, from the sadistic Iosef Tarasov, Alfie Allen, who you already hated from Game of Thrones to his father, Viggo Tarasov, Michael Nyqvist (The Girl with The Dragon Tattoo, Mission Impossible: Ghost Protocol), to the small supporting roles played by Willem Dafoe (Spider-man, Clear and Present Danger), Adrianne Palici (G.I. Joe: Retaliation, Supernatural), Ian McShane (Pirates of The Caribbean: On Stranger Tides, Death Race) Lance Reddick (Fringe, White House Down), and John Leguizamo (Ice Age, Spawn). Each one has a certain place in the film the moves the story along gracefully. They are all important to the story and add wonderful elements to Reeve's performance.

Stunt Coordinators turned directors Chad Stahelski and David Leitch set the perfect "film noir" tone for this film. The color palettes, framing of shots, and tone of the film let us know that although John Wick is set up in some type of reality it is a bit off and different from our own. The framing and directing of the action scenes are flawless and perfectly choreographed. In fact, some of the action scenes will remind audience members what a John Woo (Broken Arrow, Face/Off) type film looked like back in the last century when action films didn't go for fast MTV style cuts and PG-13 ratings.

Last but not least the music by Tyler Bates (Guardians of The Galaxy, 300) and the new song Marilyn Manson, Killing Strangers, perfectly fits the film.  They add the suspense and tension when needed, or provide extra release as John Wick takes out the "trash" in the name of his puppy. While the score came out this week, the Marilyn Manson song, unfortunately, has an unknown release date.

John Wick did break one of Hollywood's cardinal rules about not killing dogs in a film (it usually drops the box-office to zero dollars). However, the death is handled very gracefully, and the fact that John transforms back into the "boogeyman" and makes everyone pay for the loss of his dog (and then some) helps the pain of seeing a dog pass away on screen. Even though in this reviewer's mind the loss of about 5-60 people's lives is still not enough for the life of one dog. Interestingly, it seems the men in the audience were more disturbed by the dog's death than the women were.

John Wick is an amazing character-driven film that will hopefully reenergize both Keanu Reeve's career, and these types of films at the box office. If John Wick becomes the underdog of fall 2014 films I do beg the studios to not make a sequel as this film already has the perfect ending to the story. Let John Wick rest, while in the mind of dog lovers around the world Keanu Reeves and John Wick will go down in history as the superhero and champion for our four-legged friends everywhere.

Allison Rose
Director Chad Stahelski does a terrific job balancing plot with action and the stunt coordinators should be commended for some really great sequences.
Full Review | Grade: B