With so many movies to choose from this Holiday season, it is difficult to know what is the best option for your well-earned money. I can tell you if you choose The Imitation Game, it will be money well spent. 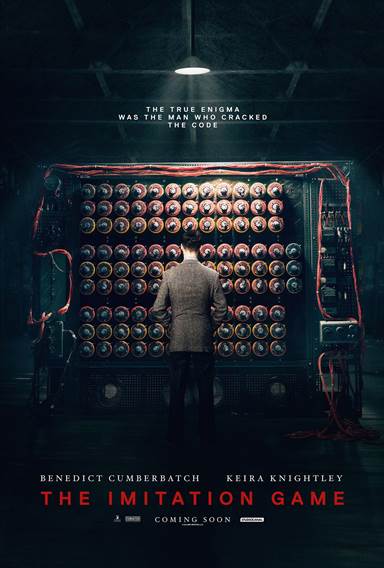 Purchase  DVD/Blu-ray/4K UHD
If you want to see an Oscar worthy film before the end of 2014, go to see The Imitation Game.  Based on the novel by Andrew Hodges, the movie tells the story of Alan Turing, a brilliant yet awkward Mathematician who basically won WWII.  Starring Benjamin Cumberbatch (Sherlock, The Fifth Estate), The Imitation Game is one of the best movies of 2014, if not the best.

During WWII the Germans utilized an encryption machine called "enigma" that allowed them to send military messages that could not be deciphered.  Each night they would change Enigma's code so enemies would never be able to figure out their system.  Having millions of sequences, it was impossible for the Allies to break the code within a 24-hour period before the machine was once again reset.  Turing was one of several brilliant Englishmen enlisted to help try and break that code.

While much of the film focuses on Turing's machine and the struggles the team endures, there is also a human-interest story layered with elements of current social commentary.  There are flashbacks of Turing being bullied in grade school and his self-discovery regarding his own sexuality.  Unfortunately, it is the latter, during a time when being gay was unacceptable, that led to him committing suicide at the young age of 41.

The movie moves at a good pace and director, Morten Tyldum (Buddy), doesn't bore the audience with too many war scenes.  Written by Graham Moore (The Waiting Room), the screenplay isn't weighed down with intricate mathematical facts and does it's best to describe what the scholars are working on in "layman's" terms.  While much of the movie is shot in drab colors and rainy days, it never feels too depressing; quite a feat for a film about war.

Cumberbatch is exceptional as an awkward, brilliant man.  He portrays Turing with warmth and humanity, while still infusing him with the social outcast weirdness stereotypically present with "nerds".  Keira Knightly (Pirates of the Caribbean) has one of the best performances I have ever seen from her.  As the equally brilliant Joan Clarke; a female in a man's world; she knows she must seem outwardly demure while truly wanting to work in a more advanced profession than the secretarial pool.  Knightly plays this "yin/yang" of personality very well.  She is both friendly and inviting but feels trapped, as she must hide her intelligence behind a beautiful face.  The supporting cast is equally impressive including Matthew Goode (The Good Wife) as Hugh and Mark Strong (Before I Go To Sleep) as Stewart Menzies.

The Imitation Game is already nominated for five Golden Globe awards and I have no doubts others will follow.  It is engaging and entertaining but my only regret was that there wasn't more.  At an almost two hour running time, I never felt bored and in the end I wished the movie had expanded upon Turing and his life.  It's a tragedy that he died so young and for something that is becoming more and more accepted in today's society.

With so many movies to choose from this Holiday season, it is difficult to know what is the best option for your well-earned money.  I can tell you if you choose The Imitation Game, it will be money well spent.

Purchase a DVD/Blu-ray/4K UHD physical copy of The Imitation Game today at Amazon.com

Download The Imitation Game in Digital HD/4K from the iTunes store.

For more information about The Imitation Game visit the FlickDirect Movie Database.