While not as strong, or cohesive, as Kiss Kiss Bang Bang, The Nice Guys is still a humorous film with a multi-layered plot underneath. 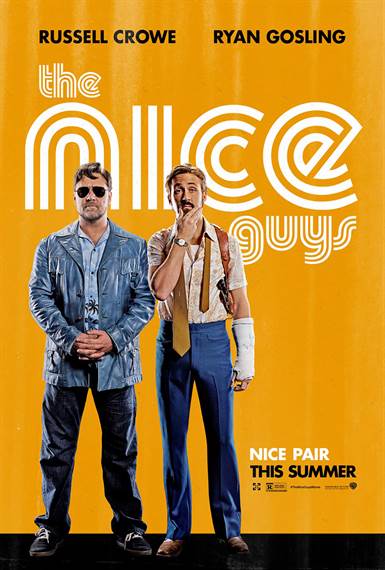 Purchase   DVD/Blu-ray/4K UHD
Writer/Director Shane Black (Kiss Kiss Bang Bang) is known for his spy/police/private investigator stories with two males as the lead characters.  His writing is often funny, wry and, at times, sophomoric.  Luckily, his latest work, The Nice Guys, serves up more of this same formula that has worked so well for him in the past.

Jackson Healy (Russell Crowe; Gladiator) is an overweight middle-aged "muscle for hire" ready to bust any face for a few dollars.  Hired by Amelia to scare off some people who are following her, he thinks his job is done when he threatens March and breaks his arm.  However, when two thugs try to kill Healy, he realizes he needs March to help him locate Amelia and keep her safe.  March and Healy end up teaming up to uncover a plot that includes murder, politics, bug business and protest films in the form of pornography (what!?!).

Gosling and Crowe are beautifully paired in this 1970s era comedy.  With a very "Starsky and Hutch" vibe, they play off of each other and work together as a well-oiled machine.  Additionally, Angourie Rice (Walking with Dinosaurs 3D) as March's Daughter, Holly, steals many of the scenes she is in and comes across as a pro working alongside the more seasoned cast.  Matt Bomer  (Magic Mike) and Kim Basinger (LA Confidential) round out this great cast.

Adding to the enjoyment is a great 1970s soundtrack and costume and set designs.  Black truly got the details of the era right and makes the audience look back and wonder, "What were we thinking"?

Gosling and Crowe make a great team that rivals some of the best duos in the past and they had a terrific script to work with which I'm sure helped.  The drama and action are a good mix and many of the jokes are laugh out loud funny.

With Black's genius behind the film, there was a good chance it was going to be a winner and he certainly delivers.  This one is definitely a must see for the 17 and older set.

Purchase a DVD/Blu-ray/4K UHD physical copy of The Nice Guys today at Amazon.com

Download The Nice Guys in Digital HD/4K from the iTunes store.

Listen to the The Nice Guys soundtrack on Apple Music.