Dark is definitely the descriptive term I would use for The Mummy, as it is much less fun and campy than the 1999 version 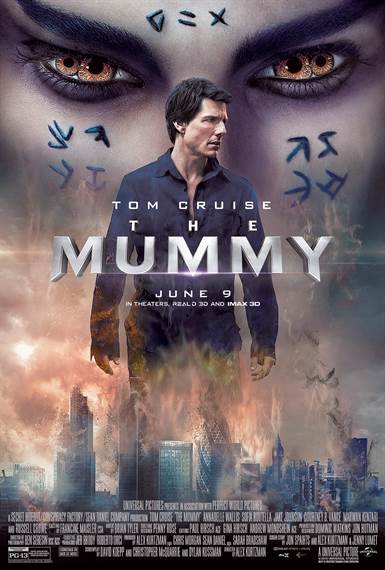 Purchase   DVD/Blu-ray/4K UHD
If you are anything like me, you loved 1999's The Mummy starring Brendan Fraser (School Ties; Gods and Monsters) and Rachel Weisz (The Bourne Legacy).  It was fun, well done and included some interesting ideas about history.  When I heard it was being "reimagined" starring Tom Cruise (Mission: Impossible) and Russell Crowe (Gladiator) and I saw the first trailer for it, I wasn't overly optimistic.  It looked decidedly different from the film I enjoyed so much and I was afraid it wasn't going to be good.  While it is, in fact, different than the other film it has a lot going for it.

Nick Morton (Cruise) and Chris Vail (Jake Johnson; New Girl) are soldiers who are doing advanced reconnaissance in Iraq.  Morton is also an illegal antiquities dealer, so when he steals a map leading to supposed treasure, he puts himself, and Vail, in harm's way to find it. When they find something unexpected, the military and archeologist Jenny Halsey (Annabelle Wallis; Annabelle) dig it up.  While transporting it back, they end up crashing in London, setting loose the evil within.

Ahmanet (Sofia Boutella; Kingsman: The Secret Service) was an Egyptian Princess planning to take over her father's throne but when he has another child, a son, she sees her plans falling apart.  Desperate, she calls on the God of Death, Set, to give her power and kills her father and baby brother.  Captured, she is buried alive in Mesopotamia but is freed when Morton, Halsey, and Vail discover her sarcophagus.  She then decides to make Morton her "chosen" in order to give human life to Set but her plans are foiled by Doctor/Lawyer Henry Jekyll (Crowe).  Ultimately, selfish Morton makes a choice and ends the Princess but comes with consequences for him.

It is nice to see Cruise not playing the straightforward action hero for a change.  Yes, there is action but his character is more self-centered here than we have seen him play in the past though.  He also shows a greater depth of emotion than we usually see from him.  Crowe is well suited for this dual role, with a tinge of madness thrown in and Boutella is an excellent choice, as something about her oozes evilness.  Wallis does a fine job but I'm not really sure she and Cruise have all that much chemistry.

Dark is definitely the descriptive term I would use for this film, as it is much less fun and campy than the 1999 version; though, I assume that was the intent as it was meant to kick off a series of films known collectively as the "Dark Universe".  There were moments I found it to be scarier than some horror films I had recently watched and the overall tone was somber.  Unfortunately, I think they were trying to interject some humor into the film with ghost/zombie Vail showing up occasionally with a bit of foreshadowing for Morton but his appearances came across as merely stupid and inane.  I also don't get the "zombies".  Shouldn't they have been "mummies"?

The three-dimensional aspects were minimal and seem to have been a post-production afterthought.  They didn't add much to the plot or the feel of the film and simply seem like a way for the studio to suck more money out of moviegoers.  The effects, however, were fairly well done, so the movie does have that going for it.

The Mummy wasn't a bad film.  I've seen far worse but it wasn't great, either, and I don't think it is going to be the blockbuster Universal was hoping for to kick start their newest series in an effort to combat the Marvel Universe.  For me, I will stick with 1999 and Brendan Fraser's Kevin O'Connell.

Purchase a DVD/Blu-ray/4K UHD physical copy of The Mummy today at Amazon.com

Download The Mummy in Digital HD/4K from the iTunes store.

For more information about The Mummy visit the FlickDirect Movie Database. For more reviews by Allison Rose please click here.

The Mummy images are © Universal Pictures. All Rights Reserved.

Read More Reviews For The Mummy