Even though it runs over two hours long, You become so engrossed in the story and the visuals that you don’t notice the length – which says a lot about Ready Player One. 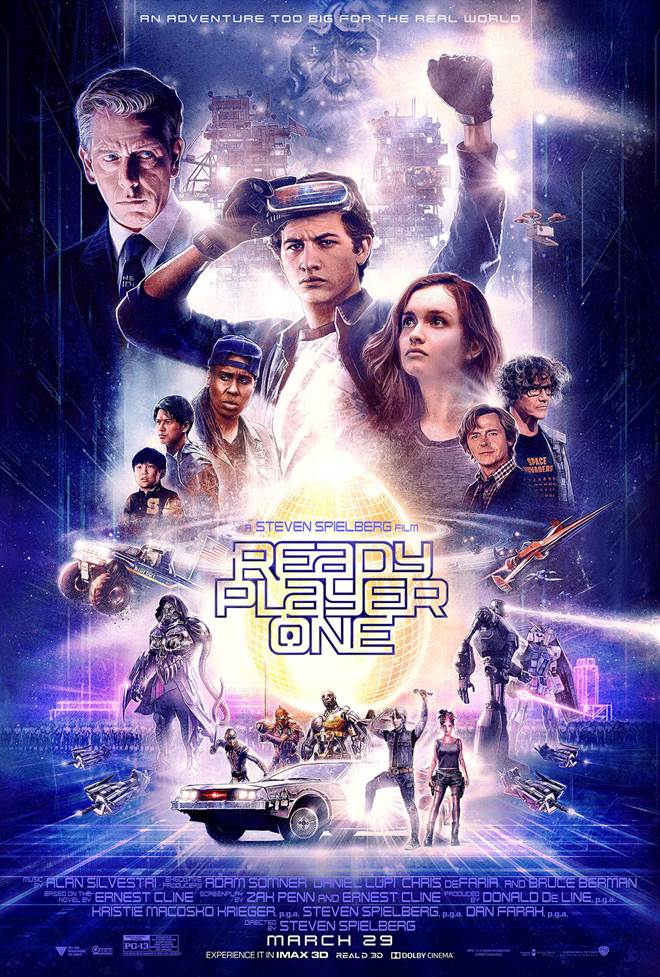 Purchase   DVD/Blu-ray/4K UHD
Ready Player One – If you grew up in the 1980's you know that phrase well, especially if you loved video games.  The words popped up every time a new game started enticing the player to prepare. It is also the title of a New York Times bestselling book by Ernest Cline (Fanboys) that found its protagonist living in both a virtual world and a stark and dismal reality surrounded by 80's pop culture references everywhere.  With the visual stimulation described in the novel, there is a natural inclination to interpret the written words and make them into pictures.  Award-winning director Steven Spielberg (Jurassic Park) has done just that and brought this incredible world to life.

Wade Watts (Tye Sheridan; X-Men: Apocalypse) is a poor teenager living in the "stacks" (a.k.a. slums) of Columbus, Ohio with his Aunt and her abusive boyfriend.  In the Virtual World, Oasis, he is known as Parzival who is friends with "H" (Lena Waithe; Master of None).  They are both "gunters" – Egg Hunters looking for Halliday's (Mark Rylance; Bridge of Spies) mysterious keys, which open the ultimate prize…control of Halliday's fortune and the Oasis. These keys can only be found by studying Halliday's "bank" of memories.

Also searching for these keys are the "employees" (a.k.a slaves) of Innovative Online Industries (IOI) in order to take over the Oasis and become the biggest gaming company in the world.  IOI's CEO, Sorrento (Ben Mendelsohn; Rogue One: A Star Wars Story) used to work for Halliday as an intern but left to compete with The Oasis.  As Parzival Art3mis/Samantha (Olivia Cooke; Bates Motel), H and a few other friends find the keys and move closer to the prize the stakes become higher not only in the virtual world but in real life as well.

In Ready Player One, Spielberg showcases everything he does so well. The visuals and special effects are amazing and his sweeping camera shots make the audience feel as if they are actually in the game as well.  There were moments I felt as if I was on a roller coaster ride.  The script is terrific as well, capturing the audience's attention early on and keeping it throughout the entire movie.  Of course, the numerous ‘80's references transports the viewer to a different time and offer some humorous moments.  It is a truly different movie-going experience when the audience audibly reacts to what is happening on screen, which happened several times.

Though the stars are young, Sheridan and Cooke are both seasoned actors who bring believability to their characters.  Joining them, Mendelsohn is excellent as the antagonist.  He exudes a blend of sweet friendliness with the maniacal sneer of an evil person.  Ryland is generally terrific and offers a bit of quirkiness often found in computer programmers. The rest of the cast is strong as well giving Ready Player One a solid group of actors to enjoy.

If I have any criticisms of the film it is that 1) there are so many references and they move across the screen so quickly that it is hard to catch them all (Although, I'm sure as soon as the movie comes out on Blu-ray someone will pause back and forth and catalog them all) and 2) the ending left a little to be desired.

With so much to offer, this movie is a fun, feel good, action film with some great references and an awesome soundtrack.  Even though it runs over two hours long, you become so engrossed in the story and the visuals that you don't notice the length – which says a lot about the film.  This is one movie that is definitely worth seeing.

Purchase a DVD/Blu-ray/4K UHD physical copy of Ready Player One today at Amazon.com

Download Ready Player One in Digital HD/4K from the iTunes store.

Listen to the Ready Player One soundtrack on Apple Music.

Ready Player One images are © Warner Bros.. All Rights Reserved.