As a standalone film, Solo: A Star Wars Story has a good plot, interesting characters, and well-done action scenes.  As part of the classic franchise, it comes across a little disjointed and disconnected. 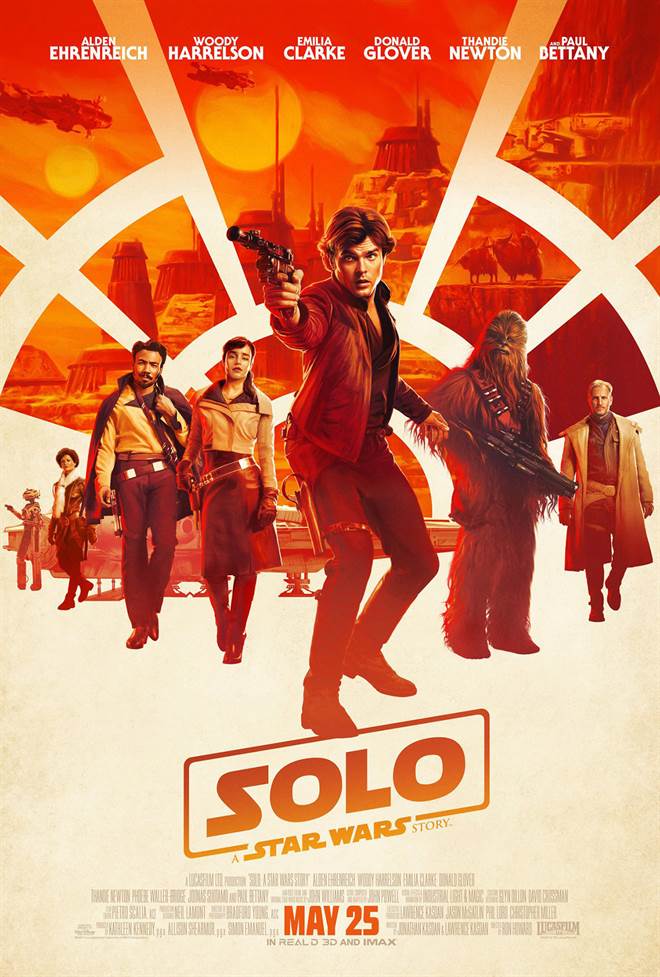 The Star Wars Saga was meant to be a series of nine films chronicling the rebel alliance as they try to defeat the Empire.   Since 1977, we have been watching as Luke, Leia and Han have been fighting evil and saving the day (or at least trying to).  In 2016, we got even more than we expected when Rogue One: A Star Wars Story filled in some the gaps before A New Hope begins. This month, we are once again treated to something special as Solo: A Star Wars Story comes to theaters nationwide.  This latest movie introduces us to the backstory of one of our favorite characters - Han Solo (Alden Ehrenreich; Beautiful Creatures).

Han is a scavenger who lives in Corellia and works for an overlord who keeps him as a slave. His love is Qi'ra (Emilia Clarke; Game of Thrones) and together they have a plan to escape.  Unfortunately, things go south and Han gets out but Qi'ra is captured.  Three years later, after Han joins the imperial forces, he hooks up with a gang of thieves in order to try and steal enough to get money to buy a ship and go back to find Qi'ra.  However, the plan doesn't work and he finds himself begging for his life from Dryden Vos (Paul Bettany; Avengers: Infinity War).

Suddenly, Han is reunited with Qi'ra (since she now works for Vos) as they, along with Tobias Beckett (Woody Harrelson; Three Billboards Outside Ebbing, Missouri) and their new friend, Lando Calrissian (Donald Glover; Spider-Man: Homecoming) attempt to steal contraband and bring it back to Vos.  They also pick up a Wookie along the way and the legendary team of Han and Chewie (Joonas Suotamo; Star Wars: The Last Jedi) is born.  Of course, their journey is one of epic proportions with double-crossing, lots of action and a surprise cameo at the end of the film.

I'm not sure if it's Ehrenreich himself or the script that leaves him teetering on the edge of greatness but while he embodies some of Solo, he never quite makes the commitment all the way through.  I think if the writers Jonathan (The First Time) and Lawrence Kasdan (Wyatt Earp) and George Lucas (Raiders if the Lost Ark), had taken more risks, the character would be more interesting and resemble Harrison Ford's Han Solo more.  The rest of the cast is very strong though.  Clarke once again proves why she is such a good character actor and Bettany is deliciously evil.  Harrelson does a great job and Glover is a standout amongst a truly talented group.

Of course, the effects are something we have come to expect from the Star Wars saga and Solo has much to offer in that regard.  The explosion/implosion of the radioactive contraband is fantastic and really makes an impact.  The creatures are intricate and detailed but one would expect no less from this franchise (especially after the CGI gaffs that were made in the 1990's).  The action sequences are the standard Star Wars fair, which is certainly not a bad thing.  There is a lot of fancy flying and gun fighting but not really a lightsaber to be found.

As a standalone film, Solo: A Star Wars Story has a good plot, interesting characters, and well-done action scenes.  As part of the classic franchise, it comes across a little disjointed and disconnected as if it was the bastard step-child of the iconic film series, which may actually be apropos considering the Han Solo character always seems to be the "black sheep" of the rebel alliance.

Good but not great, if you are a Star Wars fan you should probably go and see it regardless of what critics say.  It will also be interesting to see what idea they come up with next to continue the beloved franchise once Star Wars: Episode IX comes to theaters late next year.

Download Solo: A Star Wars Story in Digital HD/4K from the iTunes store.