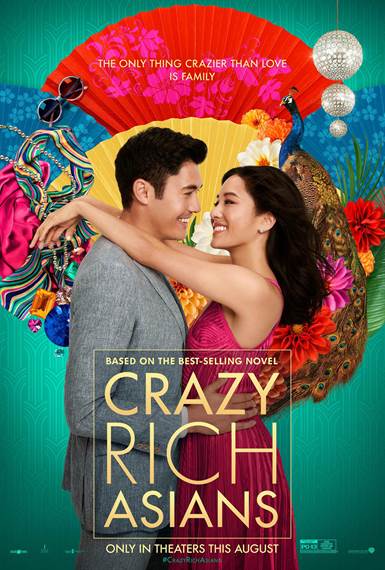 It has been 25 years since there has been a major feature film starring an all-Asian cast and I'm sure there is some social commentary dialogue for the large gap in time between the two films.  1993's The Joy Luck Club is a dreary, serious drama about Asian culture, class discrepancies and honor while this year's Crazy Rich Asians is decidedly lighter fare.  The romantic comedy based on the 2013 novels of the same name by Kevin Kwan also explores the same themes of class discrepancies, Asian culture, and honor but does so in a lighthearted and hilarious way without the weight felt by the former film.

Rachel (Constance Wu; Eastsiders) and Nick (newcomer Henry Golding) are a young, New York couple who are both professors at NYU.  They have been dating for over a year when Nick invites Rachel to Singapore for his best friend's wedding.  Rachel is excited and nervous to meet Nick's family especially after she learns they are wealth – a fact Nick kept from Rachel.  Rachel is determined to enjoy this trip especially since her best friend from college, Peik Lin Goh (Awkwafina; Ocean's Eight), also lives in Singapore so Rachel will get to visit with her.

Little does Rachel realize she has a target on her back with almost everyone taking aim at her.  Early on in the trip, Rachel learns from Peik Lin Goh that Nick Young's family is one of the wealthiest in Singapore and he is definitely one of the most sought after bachelors so there are a number of young women "out to get" Rachel.  Additionally, his mother, Eleanor (Michelle Yeoh; Crouching Tiger; Hidden Dragon), is against "the American" from the beginning as she feels Rachel doesn't understand Nick's responsibilities to his family or Asian traditions. When Eleanor digs up Rachel's family secret (that Rachel was unaware of) Rachel gives up fighting and lets the love of her life go for good.

The film works on so many levels it's simply a joy to sit through.  Golding's performance is a little uneven but the rest of the cast make up for it in spades.  Interestingly, the stars of the film, Wu and Golding, aren't the "shining stars" of the movie - that honor goes to the supporting cast.  Yeoh is terrific as the stone cold disapproving mother but Awkwafina, Ken Jeong (The Hangover) and Nico Santos steal (Paul Blart: Mall Cop 2) the show.  Jeong is his usual funny self and proves that the is willing to do almost anything for a laugh while Santos brings a snarky, catty humor to his part.  However, the standout is Awkwafina.  She is a chameleon who can mold into whatever is needed whether it is the quiet pickpocket lurking in the background in Ocean's Eight or the outrageous and rich best friend egging Rachel on in this film.  Her performance is as memorable as her appearance. The ensemble is simply terrific which makes the movie laugh out loud funny from beginning to end.

The scenery is also magnificent.  The aerial shots made we want to immediately boon a trip to Asia to experience the beautiful sights and culture.  Director Jon M. Chu (Now You See Me 2) does a wonderful job of blending the opulence of the modern world with the splendor of historic objects and traditions.  He makes a Rom com that is poignant and funny without being cheesy.

Regardless of whatever reason makes you want to see the movie - you need a laugh, you like rom coms, you read the book, etc. You MUST see this film.  It is heartwarming and hilarious all rolled into one glorious movie.  We may have had to wait a quarter of a century for a film with an All Asian cast but it was well worth it.