Home / Reviews / Ben is Back

Julia Roberts delivers an award-winning turn creating the most sensitive, anguished, and absorbing characterization in her long career. 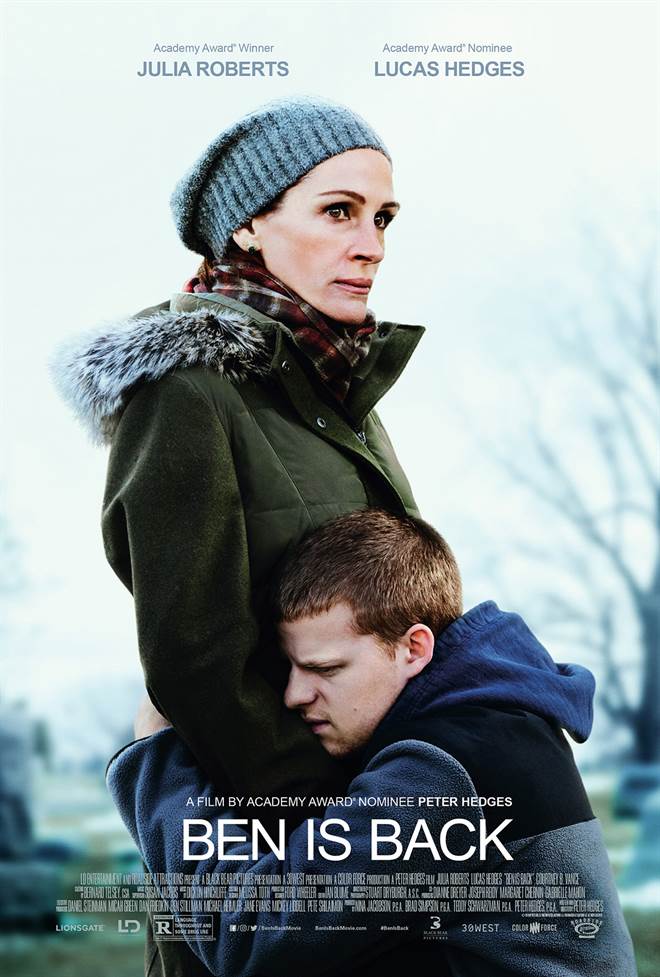 Purchase   DVD/Blu-ray/4K UHD
There's any number of good reasons why we go to movies. Why we plunk down our hard earned money, sit in a dark theater away from the world, and watch something unveil itself on the big screen in front of us. One thing I know for sure, I think I know for sure, is that we don't go to movies to be made further depressed than the world we live in is already making us.

As to the movie at hand, "Ben Is Back", brilliant acting aside, and there definitely is some here, I can't think of any other reason to see this film. It's gut-wrenching, unflinching, horrific at times, filled with anguish, downright bone-chilling, and all in the worst possible way. What begins as a plausible drama about addiction rapidly turns into an "abduction film" and then flips into a "standard crime drama", before returning back to its main theme of addicted youth and its effect on the family unit. It's exhausting, wholly depressing, and best expressed in documentaries about the rampant drug addiction problems facing our youth today.

I get that the subject matter is the hot potato of our times and that it's ripe for the picking, but to spend almost two hours living on the edge in it, is not what I consider entertainment. But that's me, you may feel differently, and you're certainly entitled to.

It's Christmas Eve Morning and while the Burns family prepares for a holiday pageant in church, hooded nineteen-year-old son Ben (Hedges) lurks outside their suburban home. He's back for Christmas having gone AWOL seventy-seven days into his third go around in Rehab. Returning home and finding Ben there, his mother, Holly Burns (Roberts), is shocked, wary, and worried by her beloved son's sudden unannounced return.

After agreeing to let him stay for only 24 hours, and watching his actions, it soon becomes obvious to everyone that Ben is still very much in harm's way and to keep him clean they had all better watch him like a hawk.

Returning home after Christmas Eve services, the family finds their door smashed open, the Christmas tree knocked over, and Ponce (the family dog) is missing. Clearly, Ben's old circle of friends have discovered he's home are still upset over something he once did.

As I mentioned before all the performances are first rate, with Julia Roberts delivering an award-winning turn creating the most sensitive, anguished, and absorbing characterization in her long career. Hodges matches her performance turn for turn proving himself to be one of his generation's greatest talents. Together they almost save the film, but ultimately, it's the story that will leave a bad taste in your mouth.

My take… I didn't like this film. It depressed me and the audience who watched with me.

"Ben Is Back" is Rated R for language throughout and some drug use.

For more information about Ben is Back visit the FlickDirect Movie Database. For more reviews by Alyn Darnay please click here.

Allison Rose
Hedges has been a star since his first role and he has had career making performances in some of the best films of 2017 and 2018 alongside some of Hollywood’s biggest names.
Full Review | Grade: B