My take…Pass this one by, but keep your eye out for all three of these exceptional actresses in the future. 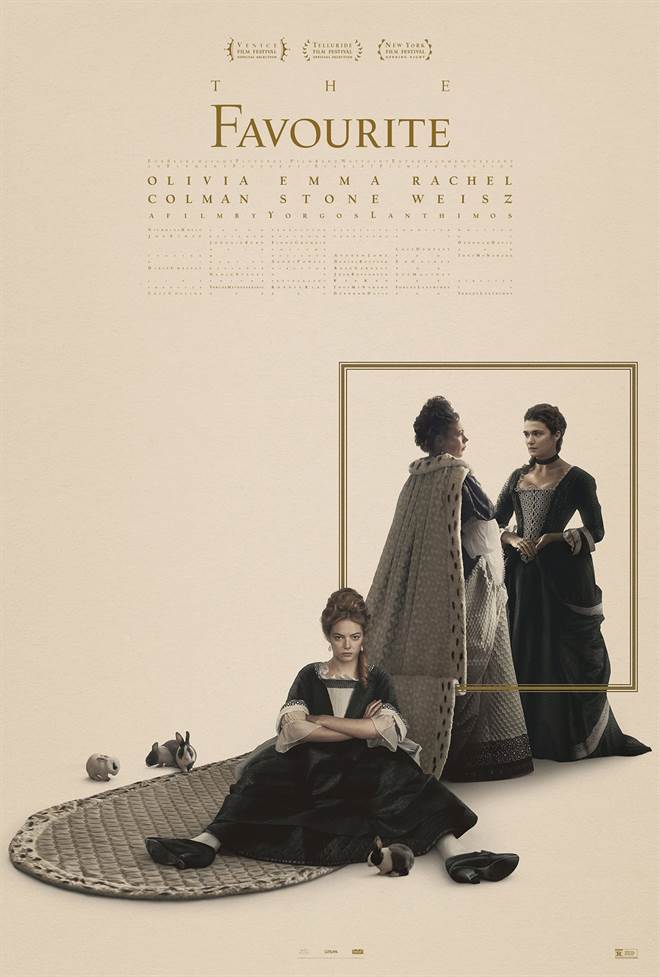 Here we go again, another English Period Piece. This one is about Queen Anne and it's thinly disguised as a cynical comedy of royal manners. In reality, it's a nasty, vicious, profane, royal story about two women and their devious plotting and scheming against each other, to become the favorite confidant to the Queen. Take confidant, to mean lover; for even though this Queen has lost seventeen children in one way or another, it appears her sexual appetite leans toward her own sex. A somewhat forbidden activity at the time, it appears, even for a Queen.

Now that alone would make for the basis of a great film, or so you would think. However, the way Director Lanthimos chose to tell the story it became rather an overblown film, devoid of any sense of its own soul. Beautiful sets, stunning cinematography, and even three brilliant actresses cannot make up for the lack of a well-crafted script that develops its characters and plotline instead of cowering under a dose of foul-mouthed one-liners and poorly set up numbered and titled sequences.

When a film throws its audience into one uncomfortable scene after another for the pure joy of being able to do it, I draw the line as to what makes responsible filmmaking to me. I'm not advocating any kind of censorship here at all; I'm totally against that. I'm just saying that "The Favourite" could as easily have been an entertaining film of amusing social mores, as it is the exact opposite.

The year is 1708, Britain is locked in a war with France, and Queen Anne (Colman) sits on the throne in frail health due to an advanced attack of gout, not caring about what happens at all. It appears her life-long confidant, adviser, and secret lover Sarah Churchill, the Duchess of Marlborough (Weisz), is make all decisions of state for her.

Into this cloistered existence comes Sarah's impoverished distant cousin Abigail Masham (Stone). Using her many charms she endears herself to Sarah. As Sarah takes her under her wing, Abigail begins to plot a chance at returning to her aristocratic roots. As politics become time-consuming for Sarah, Abigail steps into fill-in as the Queen's companion. Their burgeoning friendship gives her the opportunity she has been waiting to fulfill her ambitions, and she won't let anything stand in her way.

Olivia Colman definitely steals the show with her brilliant interpretation of Queen Anne as a fat, diseased, ill-tempered beast of a woman. Then with both Emma Stone and Rachel Weisz adding their great performances as well, it's a pity the movie is so mired in its own mud. It'll drown at the box office.

My take…Pass this one by, but keep your eye out for all three of these exceptional actresses in the future.

"The Favourite" is Rated R for strong sexual content, nudity, and language.

Purchase a DVD/Blu-ray/4K UHD physical copy of The Favourite today at Amazon.com

Download The Favourite in Digital HD/4K from the iTunes store.

Listen to the The Favourite soundtrack on Apple Music.

For more information about The Favourite visit the FlickDirect Movie Database. For more reviews by Alyn Darnay please click here.

The Favourite images are © Fox Searchlight Pictures. All Rights Reserved.

Read More Reviews For The Favourite