Smith and Lawrence have always had great chemistry together and this installment does nothing to dispel that fact. 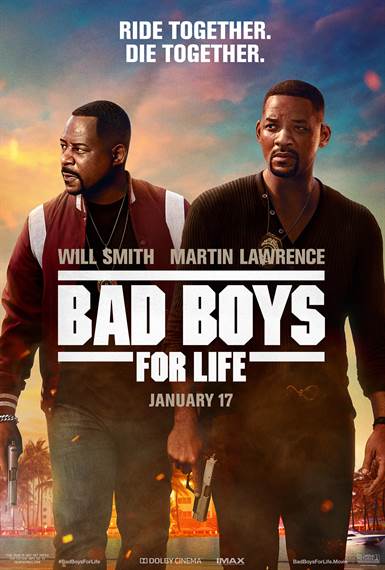 It's hard to believe that it was 25 years ago when we were first introduced to Mike Lowrey (Will Smith; Men in Black) and Marcus Burnett (Martin Lawrence; Martin), two Miami police detectives that didn't generally do things "by the book".  Lowrey was the wild guy who drove a Porsche and lived in a spacious apartment overlooking the water while Burnett was a family man with more to lose and who tended to be the voice of reason in their partnership.  They should have mixed like oil and water but somehow they blended smoothly creating yet another cop duo that will long be remembered.  While there were only eight years between the original film and its sequel, fans had to wait seventeen years after the second film to get the third installment.

As the movie opens we once again see the pair riding around in Lowery's Porsche speeding to an unknown destination.  Upon arrival, it is revealed that they were at the hospital to see Burnett's grandson who was just born.  This life-altering event has Burnett contemplating retirement and soon after we see numerous officers at a bar toasting Burnett on his impending retirement.  Of course, Lowrey is having none of it so when Burnett suggests he can run faster than his partner prompting them to a race on the sidewalk outside the bar.

As Lowrey turns around to taunt Burnett, he watches in horror as Lowrey is gunned down right there on the street.  Rushed to the hospital, Lowrey lays in a coma for a few months before he recovers.  Finding out that Burnett has decided to retire, Lowrey becomes angry and calls Burnett a quitter for not helping him investigate who shot him.  As more Miami officials start being murdered, the AMMO team tries to piece together the connection.  When the assassin once again comes after Lowrey, he says something that gives Lowrey a clue as to who could be behind the killings and opens old wounds from Lowrey's past.

Smith and Lawrence have always had great chemistry together and this installment does nothing to dispel that fact.  Their banter and arguments are just as sharp as they were twenty-five years earlier and some of their funnier lines are delivered perfectly.  Joining them this go-around is a team of younger officers with advanced technical skills who are played by Vanessa Hudgens (High School Musical), Charles Melton (The Sun is Also a Star), and Alexander Ludwig (The Hunger Games).  They are led by an older officer, Rita (Paola Nunez; The Purge), who happens to also be one of Lowrey's ex-girlfriends.  This team works together like a well-oiled machine that only serves to enhance Smith's and Lawrence's performances.

For those that loved the Michael Bay helmed Bad Boys movies, where there were more explosions than dialogue, you might be a little disappointed by this threequel. While there is still plenty of action and explosions, there is also a deep-rooted plot and a well-written script.  The beginning of the movie is a little slow, as the action doesn't really kick in until a good thirty minutes into the film, but once it does, it is well placed and keeps the pace of the movie-going.  The script offers a blend of comedic one-liners that are hilarious and sentimental, introspective/philosophical moments with a surprise or two thrown in.

While Bad Boys for Life isn't without its flaws (which I won't elaborate on as it will lead to spoilers), it is an entertaining two hours full of laughs and heart that almost any viewer would enjoy.

Download Bad Boys For Life in Digital HD/4K from the iTunes store.

Listen to the Bad Boys For Life soundtrack on Apple Music.