The vocal talent makes this movie better than it should be. 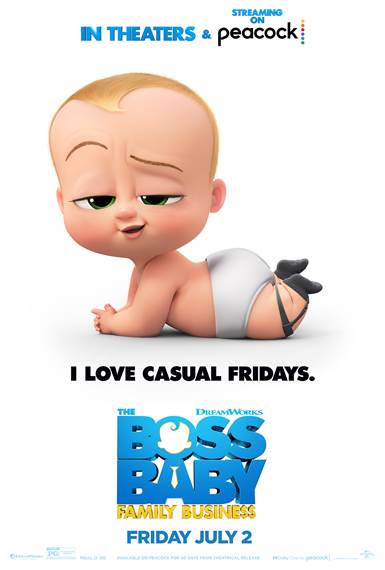 DreamWorks Animation has created some adorable characters and movies over its twenty-six-year history.  From Shrek and Kung Fu Panda to Trolls and, the highly successful, How to Train Your Dragon, they have been entertaining families for almost three decades.  In 2017, they introduced us to an infant named Ted (Alec Baldwin; Mission: Impossible - Fallout), who was actually the shrewd businessman and CEO of Baby Corp.  The Boss Baby earned over $500 million worldwide on a $125 million budget but earned mixed reviews from critics.  As with any "sure thing", DreamWorks developed a sequel titled The Boss Baby: Family Business which will hit theaters this week, in time for the July 4th holiday weekend.

Tim Templeton (James Marsden; Hairspray) is all grown up and is a stay-at-home dad.  His brother Ted (Baldwin) is a hedge fund CEO who never married and who never sees his brother Tim anymore. When Tim sends his older daughter, Tabitha (Ariana Greenblatt; The One and Only Ivan) to an elite school, she increasingly grows distant from Tim, much to his dismay.  Making things even worse, Tabitha seems to gravitate towards her Uncle Ted when he shows up for a quick visit making things even more strained between the brothers.

One night when Tim hears Tina (Amy Sedaris; Elf), his infant daughter, talking, he discovers she is actually a Baby Corp. agent, and she is on a mission.  It seems the Acorn Academy that Tabitha attends is owned by a former Baby Corp. Agent, Dr. Armstrong (Jeff Goldblum; Jurassic Park) who has a devious plan to take over the world.  In order to defeat the rogue agent, Tina enlists the help of Tim and Ted and gives them a formula to turn them, temporarily, back into their younger selves.  Of course, things don't go according to plan but in the end, the bad guy is defeated, and the Templeton family is better than before with Tim and Ted reconciling.

The vocal talent makes this movie better than it should be.  Baldwin reprises his role making Ted sound authoritative and "all business".  Marsden replaces Tobey Maguire (Spider-Man) as the adult Tim but honestly, the change seems minimal as Marsden does a very good job.  Sedaris as Tina is excellent, and her intonations are perfect.  Greenblatt, despite her young age, plays Tabitha beautifully, and Eva Longoria (Desperate Housewives) rounds out the cast nicely as Tim's wife, Carol.  Honorable mention belongs to Lisa Kudrow (Friends), and Jimmy Kimmel (Jimmy Kimmel Live!)  who reprise their roles as Janice and Ted Sr., Tim and Ted's parents.

The animation is clean and detailed but one would expect no less from DreamWorks Animation.  Colors are deep, true, and run the entire spectrum of hues.  Director, Tom McGrath (Madagascar), once again helms this sequel and is consistent with his pacing and scenes, helping viewers to make a smooth transition from the first film to this latest movie.   Writer Michael McCullers (Austin Powers: The Spy Who Shagged Me) once again infuses his screenplay with "punny" humor that will grab the attention of adults and adds several "life lessons" to the story, as is expected with most animated features.

The Boss Baby: Family Matters is fun, family fare being released in time to cash in on the July 4th holiday weekend.  It is also "paint by numbers" writing so don't expect anything unique or original.  With a solid cast and excellent animation, you can't go wrong with this sequel but go into it with lower expectations as The Boss Baby: Family Matters isn't Earth-shattering or innovative in any way.

Download The Boss Baby: Family Business in Digital HD/4K from the iTunes store.

Listen to the The Boss Baby: Family Business soundtrack on Apple Music.