Home / Reviews / No Time To Die

It's a great big epic film with a consummate final performance that everyone will want to see. Farewell Mr. Craig. We will miss you…a lot. 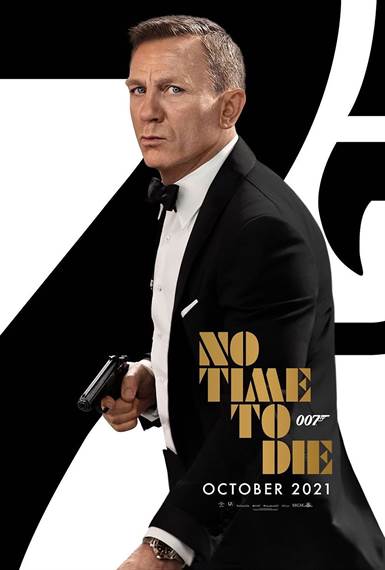 His name is Craig…Daniel Craig, and unless you've lived under a rock for the past 15 years, you know him to be the latest and one of the best incarnations of Bond…James Bond, 007, agent for Her Majesty's Secret Service. I love saying that; almost as much as I love watching his 5 films explode on the screen.

"No Time To Die" ushers in Craig's last outing as 007, and it brings with it an unexpected explosive conclusion to his series of films. Craig's version of a more sensitive, yet more deadly Bond, has re-energized the franchise, and this touching ending opens the door for the next actor who carries his Beretta, drives his Aston-Martin DB5, and shakes a Vodka Martini.

Times have changed since Daniel Craig's series debut in "Casino Royal", and so has Bond. In "No Time To Die" the writers were very clever in the way they wrote this almost 3-hour adventure; upgrading the technology, creating a stronger villain, and forcing our hero to come up to speed with things he has no knowledge of. As it turns out however, his old methods are the only way to overcome the challenges presented by the Bad Guys.

As the movie opens, Bond (Craig) has retired from active service and is enjoying a secluded life in Jamaica. His quiet life of sailing, fishing, and drinking, is interrupted when his old CIA buddy Felix Leiter (Wright) shows up needing him to retrieve a kidnapped scientist in Cuba where Americans can't go.

The small retrieval favor turns out to be far more dangerous than anticipated, leading Bond into a "Spectre" trap, and sending him on the hunt for a sinister new villain, Safin (Malek), armed with a deadly world-destroying new technology.

It's really hard not to give away the twists and turns of the plot and talk about the characters that come in and out of the adventure, but I don't want to spoil the surprises. Suffice it to say, by whatever measure you use to rate a Bond film, this one has it all, including the most compelling ending to any of the 25 films in the whole franchise.

Another interesting tidbit about "No Time To Die" is the fact that it's the most expensive Bond movie ever made. The price tag was a mere $250 million. However, every penny spent is right up there on the screen.

My take… It's a great big epic film with a consummate final performance that everyone will want to see. Farewell Mr. Craig. We will miss you…a lot.

Purchase a DVD/Blu-ray/4K UHD physical copy of No Time To Die today at Amazon.com

Download No Time To Die in Digital HD/4K from the iTunes store.

Listen to the No Time To Die soundtrack on Apple Music.

For more information about No Time To Die visit the FlickDirect Movie Database. For more reviews by Alyn Darnay please click here.

No Time To Die images are © MGM Studios. All Rights Reserved.

Read More Reviews For No Time To Die