Violent Night combines humor, blood, guns, and a Christmas miracle or two and wraps them all up with a neat and shiny bow. 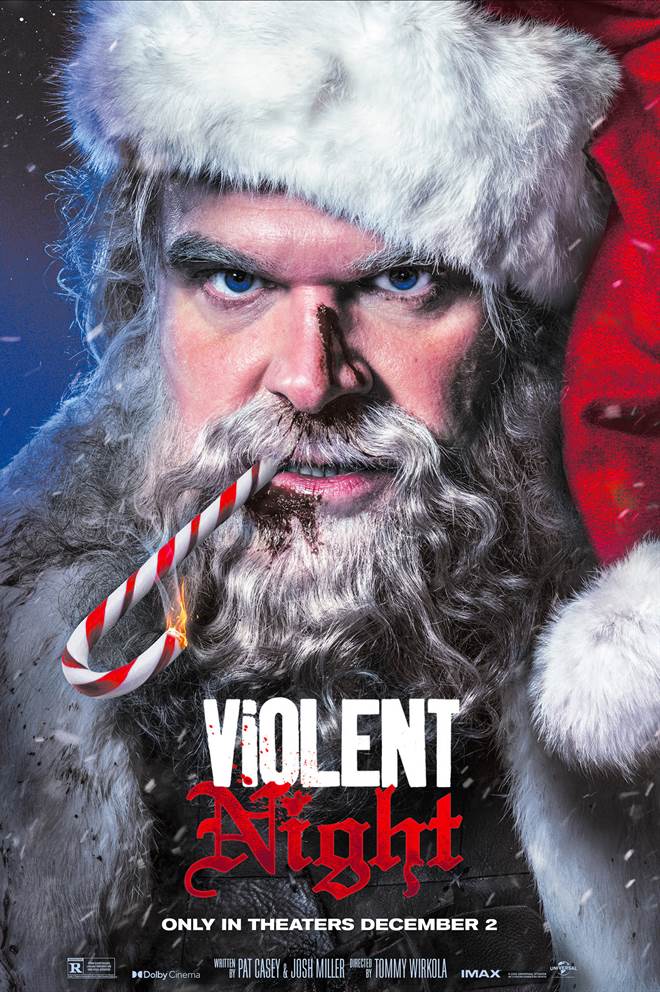 There are certain holidays that go hand in hand with the entertainment industry but no other single holiday gets as much promotion as Christmas.  One could probably list a few hundred songs dedicated to Christmas or some aspect of it and every year, right around Thanksgiving, the classic, Christmas-themed movies start appearing on television.  From serious endeavors like Miracle on 34th Street to humorous fare like Home Alone and even the occasional horror film - Krampus - the same movies pop up year after year.

But what if a holiday film came along that combined comedy and horror? Would you want to see it? If you said yes, you are in luck because opening today is a film that is destined to become a new Christmas classic - Violent Night.  Starring David Harbour (Stranger Things), John Leguizamo (The Menu), and Beverly D'Angelo (National Lampoon's Vacation) this is the one-holiday film you won't want to miss.

The Lightstones are one of the wealthiest families in the country.  Grandmother Gertrude (D'Angelo) runs the company and her son, Jason (Alex Hassell; Cowboy Bebop) works by her side. Every year they gather at the family mansion to celebrate the Holidays.  However, this year is different as some uninvited guests crash the party looking to steal hundreds of millions of dollars that are locked away in the vault. Also joining the party, unannounced, is not so jolly for Santa Claus to bring the "Christmas spirit" to the criminals.

Violent Night combines humor, blood, guns, and a Christmas miracle or two and wraps them all up with a neat and shiny bow.  Harbour does a terrific job portraying Kris Kringle with a chip on his shoulder.  From drinking too much to cursing to welding a Thor-like hammer, he is the most badass Santa the movies have ever seen. D'Angelo is a National treasure who makes no bones about the fact that she has never been a "dainty flower" and her portrayal of Gertrude simply solidifies what we already knew.

Leguizamo plays a hardened criminal which is a role we don't normally see from him.  He usually leans more towards comedic characters which is ironic since he is the bad guy in a gory but very funny film. Relative newcomer, Leah Brady (Umbrella Academy) is very good as Trudy Lightstone, Jason's daughter who asks Santa, for her Christmas gift, to reunite her parents.  She gets a few moments in the spotlight and, after watching Home Alone, she sets up a few "traps" for the bad guys that would make Kevin McCallister proud.

If you want a sunny, lighthearted, Christmas movie, Violent Night isn't for you.  It has a bad guy being impaled on some outdoor holiday decorations, a beheading, a broken finger via nutcracker, and multiple shootings. Then there is the best but most gruesome killing of them all that I will simply call "death by chimney".

Counterbalancing the gore is some of the funniest moments I have seen in a movie in a long time. I don't mean a chuckle or two here and there.  I mean full-on Ho Ho Ho, belly laughter throughout the movie.  Even some of the gore was so outrageously over the top that it was slightly comical while being disgusting at the same time.  The most disturbing thing though was Santa's beard.  After he is punched in the nose his beard ends up all bloody and, for me at least, it was disturbing.

Violent Night is probably not going to be a Christmas classic but it will definitely become a cult Christmas Classic that will most likely become a drinking game at college campuses all over the country.  Great cast, strong script, bloody, gory kills...what more could a person want in a Christmas movie?