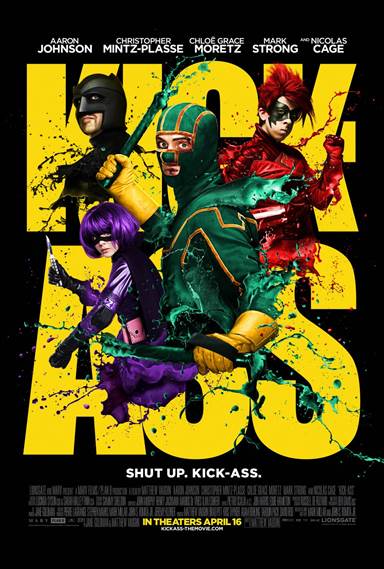 Purchase   DVD/Blu-ray/4K UHD
"All that is necessary for the triumph of evil is for good men to do nothing." Edmund Burke's quote is all that is necessary to summarize this movie. An unusual blend of teen angst, action and comic book-brought-to-the-screen movies, Kick-Ass is something different. I went into this movie not completely understanding what to expect. What I got was more than you normally get during a movie.

Our protagonist is Dave Lizewski (played by Aaron Johnson, The Illusionist), a "geek" (or a wimpy kid. Not that wimpy kid, but later you'll get the one link to that movie) who isn't a "mathnerd" is trudging through high school, trying to find his meaning in life. At first it seemed a little hard to empathize with him, but as the story progresses you will. After getting mugged for his lunch money, and noticing that a nearby resident did nothing, Dave asks why there aren't superheroes in real life....someone who stands up to evil. Then he decides to do it - become a real life superhero - an ordinary one. And Kick-Ass (the name of his superhero alter-ego) is born.

At the same time we are introduced to the subplot of this movie: the existence of another masked vigilante "duo" of father and daughter, with a humorous scene of the father, Damon Macready (played by Nicolas Cage, Raising Arizona, The Sorcerer's Apprentice) teaching his daughter, Mindy (played by Chloe Grace Moretz, Diary of a Wimpy Kid) what it feels like to be shot. If you have or had kids of your own, you will laugh out loud during this scene.

Story/Script/Plot Development (A): This was not your usual run of the mill teen angst, action or comic book movie. One of only three movies penned by Matthew Vaughn, I would classify this movie as an indie in that respect, mainly because it doesn't follow the traditional story lines of any of those three classes of movies. And that rates it very highly in my book. Some of the lines were cheesy, but it goes with the characters - you'll understand when you watch it. Now Mindy's alter-ego, Hit-Girl, has an unbelievable amount of adult language lines that may have you shaking your head due to her age, but it works with this movie.

Because this movie is unique, the various plots begin separately, and eventually weave their way together - and it works without any noticeable hiccups along the way.

Cinematography (A): This movie contains the best fight scenes I've seen since the Matrix. And while the Matrix achieved that by altering reality, these fight scenes, even though they are highly improbable, do occur in the "real" world. And there is one constant with these fight scenes: Hit-Girl. Her character is the leader for these scenes, and in one, they use a FPS point of view that actually works really well.

Acting/Chemistry (A): It is hard to find significant faults with the acting in this movie, but I'll begin with the lower quality ones. Mark Strong (Sherlock Holmes) plays Frank D'Amico, our main antagonist of this movie - a crime boss. While his character is evil, I don't feel the evil coming through the character - and I'm not sure how much of this shortcoming is from the acting versus the script. Christopher Mintz-Plasse plays his son, Chris, and unfortunately Christopher seems to be playing a very similar character to his breakout role in Superbad. It took a long time into the movie to tell if he was playing the equivalent of Scott Evil or Luke Skywalker.

Aaron Johnson, on the other hand, was excellent in his dual role. He performs the switch between characters flawlessly and appropriately for this movie. Nicolas Cage, who has been stuck in an apparent rut lately, does an excellent job - mainly when he is playing his alter-ego, Big Daddy. Occasionally, when he is Big-Daddy, he channels Batman. Not the modern Batman mind you. But the Batman portrayed by Adam West. And it works, exceptionally well. Hopefully he'll continue that kind of exceptional performance in The Sorcerer's Apprentice. But *the* star of this movie has to be Chloe Grace Moretz. Not a newcomer to acting, but she's having a breakout year because of Diary of a Wimpy Kid and Kick-Ass. Her performance (especially as Hit-Girl) really pulls this movie up from being an above-average film to an excellent one. While I doubt she'll be nominated for any awards for her role, she should be. But I don't really think the Academy will be able to look past her character's....potty mouth.

Use of locations/Costumes/Special Effects (A): New York City, nothing special there. The costumes are cheesy, but this is supposed to be "real-life superheroes", not Bruce "I have too much money" Wayne. The special effects with the fight scenes, and especially during the one FPS scene take the cake for this one. Just enough CGI to make it work without going obviously overboard.

Movie Score (C): I had to knock the score here. During the fight scenes the score came out to play, but otherwise I couldn't tell that there was a score. But the fight scenes helped keep this grade from getting any lower. Apparently the score is lifted from several other movies (properly credited of course), which can work in some instances, but this movie needs a score of its' own.

Final Grade (A): Early on in the movie I wasn't sure if mainstream audiences would be able to connect with all of the various plots and directions, but by the end of the movie I think almost anyone who can look past an 11 year old girl swearing (so much that I think sailors would blush) and gratuitous graphic violence will enjoy this movie. Is it a contender for Best Picture? No. But it has an excellent thought-line and is able to hammer home that message. Then, at the same time, to have an acceptable resolution like any regular action movie has, even though losses occur along the way. This movie will have you laughing out loud at certain times and also cheering for the heroes, especially Hit-Girl and the way she delivers justice to the evil doers in the city. Edmund Burke would be proud of her.

Download Kick-Ass in Digital HD/4K from the iTunes store.

For more information about Kick-Ass visit the FlickDirect Movie Database. 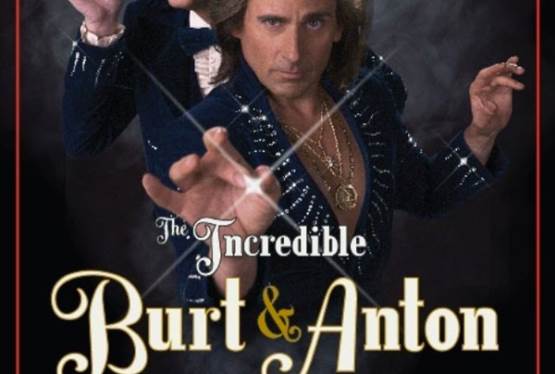