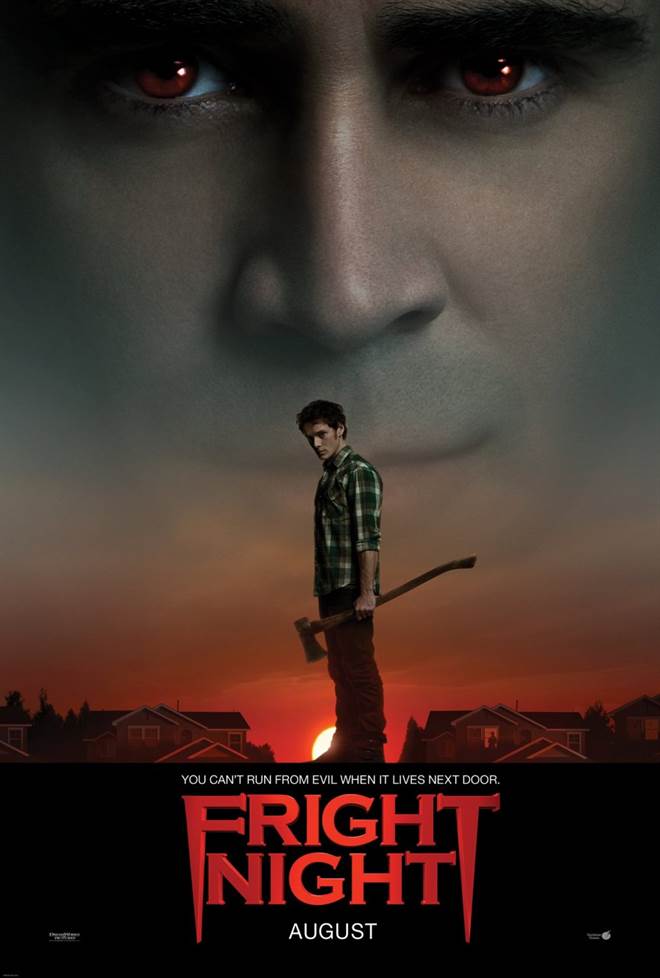 Purchase   DVD/Blu-ray/4K UHD
The scary, seething, suspenseful, gory, horror filled Fright Night left me turning my head on my way to the car following the showing.  It's a frightening flick that takes its toll on those that can have a love for the thrills that evil can provide.  You don't have to be Goth to enjoy, just a sense of humor and a need to feed your bloody thirst for a good horror movie.

I am a huge horror fan and I've seen the 1985 original starring Chris Sarandon as Jerry and Roddy McDowall as Peter Vincent and loved it even though it didn't have all the special effects that ramp up this version.  The remake of Fright Night does have much of the comedy as the first except here they use it as a relief from the horror where in Tom Holland's it was more of a tongue in cheek campy kind of fun.  While this one has a LOT more horror and suspense, it wouldn't be a bad idea to rent the original for some good laughs, but not before seeing the remake.

The performance by Colin Ferrell as the relentless blood lusting ghoul is chillingly terrific and most times terrifying.  He brings to Jerry a wicked smile and evil eyes that makes his character very creepy and spine chilling, just what's needed to carry off the menacing plot.

Director Craig Gillespie does a great job of infusing the intermittent laughs with the help of Christopher Mintz-Plasse as Charley's nerdy best friend Ed who steel many scenes while trying to escape the clutches of the vampire.  Gillespie lays out his story and gets to the meat of it in a very nice fashion leaving no time to make his audience think of other films that may be similar.  He charges right in letting you know who the vampire is and what kind of mayhem he's taking to the neighborhood.

The film is rated R for bloody horror violence and language including some sexual references.  The 3D in Fright Night does have some very nasty things coming at you and a scene of glowing ashes that's quite mesmerizing, thanks to some amazing CGI
Cast:
Directed By:
MPAA Rating: R