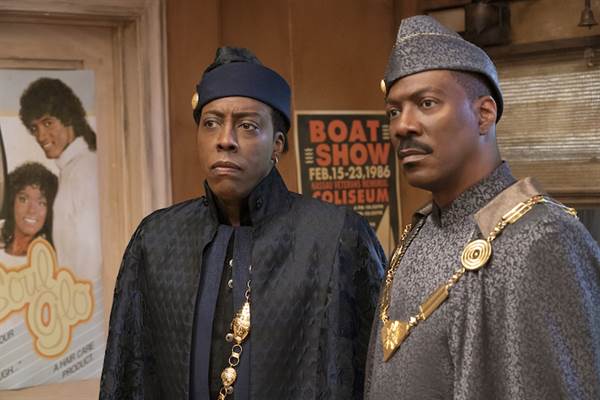 Listen to the Coming 2 America soundtrack on Apple Music.


FLASH CONTEST - See Coming 2 America With a Free Virtual Pass To...  3/3/2021 9:49 PM EDT
Thirty-three years ago, Eddie Murphy and Arsenio Hall starred in a comedy called Coming to America, which told the story of a Zamundan prince who went to America to find his bride.  The week the saga continues when Murphy and Hall return to the characters of Akeem and Semmi in COMING 2 AMERICA.   Amazon, in conjunction with FlickDirect, would like to award a virtual pass to see the movie on Thursd...  More>>

Amazon Prime Set to Release Coming 2 America in March  11/20/2020 10:17 AM EDT
Amazon Studios has announced that "Coming 2 America" will make its debut on Prime Video on March 5, 2021, to over 240 countries and territories. The original, "Coming to America", opened in theaters in 1988 to become a box office sensation achieving over $288 million in total worldwide box office gross. The film was originally slated for a theatrical December 18 release."Coming to America was a cu...  More>> 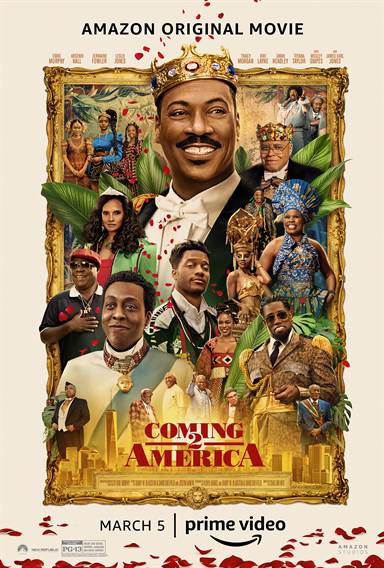 Let's get this out of the way right from the beginning; I thoroughly enjoyed this film. It's fun, as only Eddie Murphy can deliver it, it's nostalgic, conjuring up the magic the first film brought to us back in the late '80s, and it sticks to its original themes of love, family, and tradition. It's still the acceptable Cinderella story for our modern times.
Add to that the fantastic comedic chemistry between two lifelong friends, Murphy and Hall, and the subtle inclusion of themes like female empowerment, neighborhood gentrification, and the hilarious barbershop conversations that now center around everything from transgender people to electric cars. Watching "Coming 2 America", you too, should thoroughly enjoy this successful sequel whose spirit transcends the 33 years between its original and links it firmly into the now.

Here's a couple of things you might be interested in knowing. When the original "Coming To America" came out in 1988, it was the first movie in history to have an all-Black cast. It was a tremendous success around the world grossing more than $630 million dollars at today's dollar adjustment and it launched several acting careers. Asked about a "Coming To America 3", Eddie Murphy is quoted as saying he might be interested when he turns 70, that would be 11 years from now, but who knows, anyone can change their mind.

Prince Akeem (Murphy) is now the newly crowned King of the lush, rich, and royal African country of Zamunda. Before dying, his father (Jones) charged him with passing the throne on to a male heir, even though Akeem has only spawned three beautiful princesses. Through the country's Shaman, it is learned that the young Prince fathered a son on his past sojourn to Queens, New York.

So, along with his royal side-kick Semmi (Hall), the two embark on an all-new hilarious adventure that has them traversing the borough of Queens in order to find this boy (Fowler) and bring him back to Zamunda, where he can be trained in Princely etiquette and assume his rightful place in the royal court.

The film is true to its roots in every way. Director Craig Brewer did a masterful job living up to John Landis' directorial imaginings of the original and adding just the right amount of updating to keep it fresh. Murphy and Hall should take their show on the road, we just don't see enough of them, they're just so darn good! Other standouts in the film were, Leslie Jones, Tracy Morgan, Jermaine Fowler, and Wesley Snipes in the weirdest role of his career.

My take…Packed with comedy, action, and just plain fun, "Coming 2 America" is not only a must-see for fans of the original film but actually for everyone!