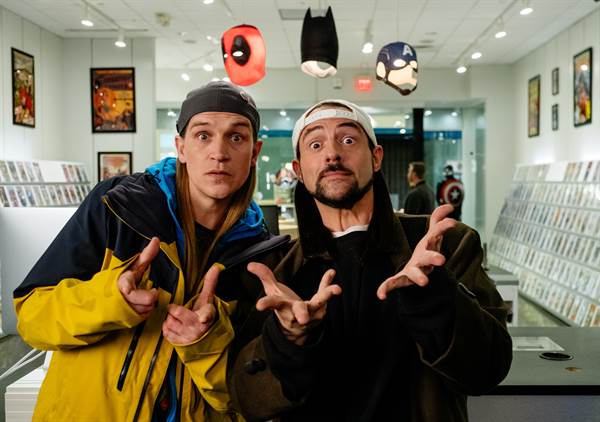 The stoner icons who first hit the screen 25 years ago in Clerks are back, bringing high times and hilarity in the newest star-studded adventure from Kevin Smith’s legendary franchise. When Jay and Silent Bob discover that Hollywood is rebooting an old movie based on them, it’s game on, as the clueless duo embark on another cross-country mission to stop the madness all over again! With all-star cameos from Matt Damon, Ben Affleck, Chris Hemsworth, Rosario Dawson, Melissa Benoist, Joe Manganiello, Molly Shannon, and more, this is the kickass comedy reboot you’ve been waiting for.

Download Jay and Silent Bob Reboot in Digital HD/4K from the iTunes store.

Listen to the Jay and Silent Bob Reboot soundtrack on Apple Music. 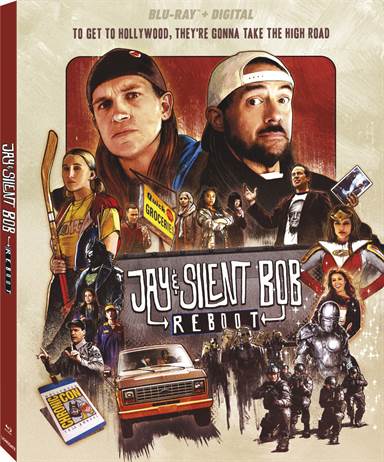 Back in 1994 a little known writer/director named Kevin Smith (Mallrats) exploded onto the Hollywood scene with his feature film debut, Clerks.  The movie won two awards at the Cannes Film Festival and became a cult classic that spawned a sequel (and a third installment on the way), a television series and a spin-off film starring Jay (Jason Mewes; Zach and Miri Make a Porno) and Silent Bob (Kevin Smith; Chasing Amy), two of the characters from Clerks.  In 2001, these pot-smoking "degenerates" went on an adventure to Hollywood to stop a movie, based on them, from being made.  Eighteen years later, they once again graced the big screen last November in Jay and Silent Bob Reboot.

By now every Clerks fan knows of the convenience store located in Leonardo, NJ where Jay and Silent Bob hung out (Having grown up in that part of New Jersey around the same time frame as Kevin Smith and Jason Mewes I particularly have similar memories…or maybe they are nightmarish flashbacks).  Dante (Brian O'Halloran; Mallrats) ran the store and Randal (Jeff Anderson; Zach and Miri Make a Porno) worked in the video rental shop next door. This is 2019 though and the video shop is out of business and a chicken place, called cock smoker, is about to open.  However, the new restaurant is really a front for Jay and Silent Bob's illegal weed shop.  When they get busted, their lawyer makes them sign a contract before trial and once they are released they discover, having been tricked by their lawyer, the contract was really to give up their rights to the name Jay and Silent Bob.

Once again they head off to California to Chronic Con  - a convention for fans of Bluntman and Chronic – to stop yet another movie using their names and likenesses from being made.  Along the way, they stop in Chicago and find out that Jay's old girlfriend, Justice (Shannon Elizabeth; American Pie), lives there.  They decide to go visit her and discover she has a teenage daughter, Milly (Harley Quinn Smith; Once Upon A Time in Hollywood) who forces Jay and Bob to take her and her friends to Chronic Con with them.

What can one say about Smith and Mewes? They are the perfect stoners and Smith's knack for telling their outrageous story never disappoints.  However, if you have seen one Jay and Silent Bob "shtick" then you have pretty much seen them all.  Harley Quinn Smith is pretty good for  - let's face it – having earned the role through nepotism.  She has her father's same sense of sarcastic humor that plays well on screen and it is rather ironic that she happens to look more like Mewes than her real father.  There are a plethora of cameos to enjoy as well including Matt Damon (The Martian), Ben Affleck (Argo), Rosario Dawson (Rent), Chris Hemsworth (Thor), Val Kilmer (Kiss Kiss Bang Bang), Melissa Benoist (Supergirl), etc., etc., etc.

The 1080p video resolution is standard fare these days and this Blu-ray has the picture clarity we have come to expect.  There are a few "green screen" moments that stick out like a sore thumb but for the most part, the visuals are good.  The DTS-HD Master audio 5.1 is also pretty good with plenty of ambient noise utilizing the surround speakers while the dialogue sits comfortably in the front speakers. The combo pack comes with the Blu-ray disc and the Digital HD and has about an hour and a half of extras including: Cast Interviews, Kevin & Jay Interview Cast and Crew, Bloopers and Hair Reel.

Jay and Silent Bob Reboot is mostly fan service with not too much new material added in.  As a free-standing movie goes, it is ok.  As a continuation of Jay and Silent Bob's story, it is what we have come to expect and love from Kevin Smith.

Come for the memories…stay for the hater tots.