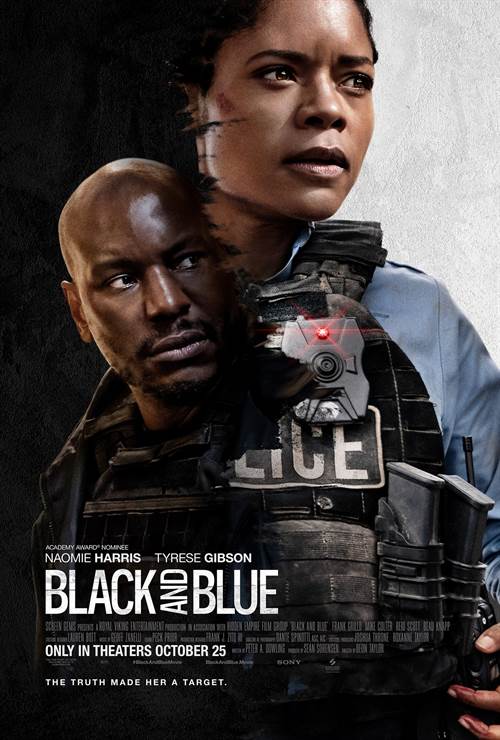 BLACK AND BLUE is a fast-paced action thriller about a rookie cop (Naomie Harris) who inadvertently captures the murder of a young drug dealer on her body cam. After realizing that the murder was committed by corrupt cops, she teams up with the one person from her community who is willing to help her (Tyrese Gibson) as she tries to escape both the criminals out for revenge and the police who are desperate to destroy the incriminating footage.

Stream Black and Blue in Digital HD/4K from the AppleTV store.

Black and Blue images are © Screen Gems. All Rights Reserved. 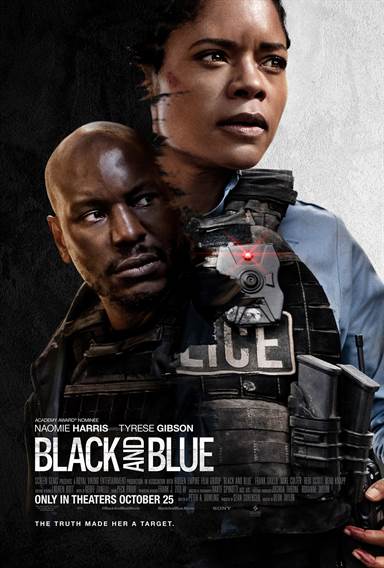 It's not easy being a police officer.  Every day they put their lives in danger while protecting people who don't necessarily appreciate them, especially in impoverished areas.  Tensions often run high as civilians and law enforcement view each other as the enemy.  Many times these conflicts are racially charged and Caucasian offices are charged with killing young, unarmed black men.   What if you were a rookie cop who grew up in just such an impoverished neighborhood in New Orleans and you watched/videotaped a NARC as he killed three young black men?  Would you turn the crooked cop in or turn the other cheek now that you are "one of them".  That is exactly the situation Alicia West (Naomi Harris; 28 Days Later) finds herself in Sony Pictures' Black and Blue.

Alicia grew up in the slums of New Orleans.  At 17 she enlisted in the military and, after doing two tours of duty, she enrolled in the police academy.  Graduating at the top of her class, she decided to return to the ninth ward and serve her childhood community.  While pulling a double shift she encounters the execution of three young, unarmed black men by narcotics officers and records the whole thing on her body camera.  After one of the narcs shoots her, West runs and goes into hiding.

Meanwhile, the narc, named Malone (Frank Grillo; The Purge Anarchy), is working with the drug dealer, Darius (Mike Colter; Luke Cage), and tells him that West was the one who killed Darius' nephew.  Now, West has both the police and gang members looking to kill her as she tries to make her way back to the police station to download the footage from her body cam.  Along the way, she enlists the help of an old friend, Milo (Tyrese Gibson; The Fast and Furious series), who is reluctant to assist her.  West and Milo fight to stay alive and reveal the truth but run into hostiles around every corner.

Harris offers a nice blend of street smarts, a hardened soldier, and a vulnerable rookie to make West the optimistic idealist who wants to bring the bad guys to justice no matter what the cost. Gibson shows us a slightly different side of him with his harder edge, ex-con vibe.  Colter's Darius is very much like his Luke Cage character in that he is cool and calm but if you look closely you can see a powder keg lying just beneath the surface.  Grillo exudes a leadership quality making him the captain of a generally well-controlled ship that is suddenly sinking.

The story gives some insight into how the impoverished African American community views the white officers who control their streets.  While very cliched, the script makes the audience sympathize with would-be criminals as they combat the civil servants who antagonize them in every way possible.  The most Caucasian police force is definitely the villain in this movie but, with constant distrust and violence from the community they serve, you can almost see why there is such animosity and an "us" versus "them" attitude being emitted from both sides.

Director Deon Taylor (Meet the Blacks) has a distinct vision and voice that occasionally gets lost but overall manages to relay the feelings and sentiments of the concepts being addressed.

Black and Blue is a story that should be told but really doesn't offer anything new in the way of race relations.  The viewer will take away different concepts based on what color eyes they are watching the film from and their experiences growing up.  Unfortunately,  the movie isn't anything all that special and is too long and drawn out at times.  It's interesting enough to see once but not something that is truly memorable.