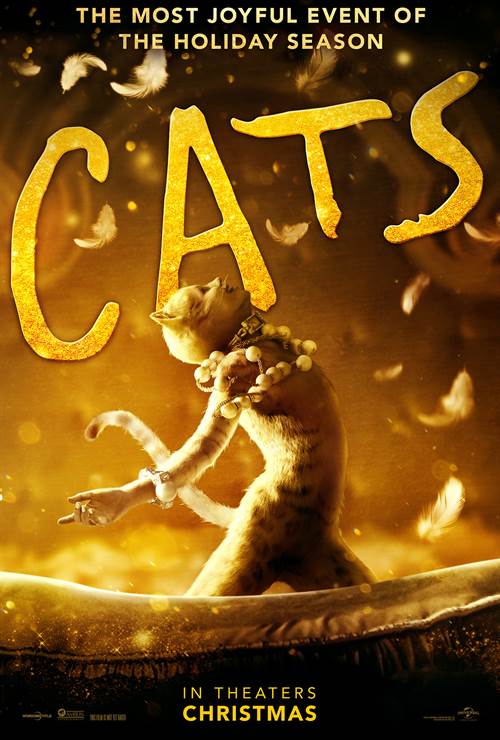 Universal Pictures and Working Title's Cats is a most-unexpected film adaptation of Andrew Lloyd Webber's beloved smash musical "Cats" and the poems from "Old Possum's Book of Practical Cats," by T.S. Eliot. Oscar (R)-winning director Tom Hooper (The King's Speech, Les Misérables, The Danish Girl) brings astonishing new technology to transform his cast members. Acclaimed casting director Lucy Bevan is casting the film adaptation. The epic will be produced by Hooper and Working Title's Tim Bevan and Eric Fellner, as well as fellow Les Misérables producer Debra Hayward-who brought the idea to Working Title. CATS will be produced by Working Title Films in association with Monumental Pictures and The Really Useful Group and executive produced by three-time Oscar (R) winner Steven Spielberg, Lloyd Webber and Angela Morrison. Hooper and Lee Hall (Billy Elliott, War Horse) have adapted the story for the screen. One of the longest-running shows in West End and Broadway history, "Cats" received its world premiere at the New London Theatre in 1981-where it played for 21 record-breaking years and almost 9,000 performances. The groundbreaking production based on T.S. Eliot's "Old Possum's Book of Practical Cats" was the winner of the Olivier and Evening Standard Awards for Best Musical

Stream Cats in Digital HD/4K from the AppleTV store.

Listen to the Cats soundtrack on Apple Music.


Complimentary Passes For Two To A Screening of Universal Picture...  12/12/2019 3:44 PM EST
In 1982 Cats premiered on Broadway to mixed review.  The Andrew Lloyd Webber musical based on the book, Old Possum's Book of Practical Cats by T. S. Eliot was, at one time, the longest running musical on both Broadway and in London's West End. The award winning show has now been transformed into a highly anticipated movie and before it is released nationwide, Universal Pictures, in conjunction wit...  More>>