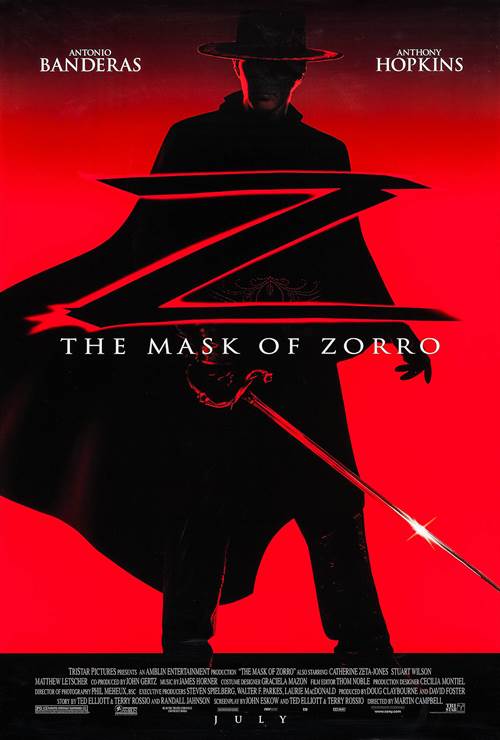 When a power-crazed despot schemes to buy California from Mexico, it takes two Zorros--the legendary Don Diego de la Vega (Anthony Hopkins) and his chosen successor Alejandro Murrieta (Antonio Banderas), a dashing bandit-turned-hero-- to defeat the tyrant's unscrupulous plans. But can even their combined skills, bravado and derring-do be enough to achieve de la Vega's ultimate goal: revenge against the man who killed his wife, kidnapped his daughter and held him prisoner for twenty years?

Purchase DVD/Blu-ray/4K UHD physical copy of The Mask of Zorro today at Amazon.com

Download The Mask of Zorro in Digital HD/4K from the iTunes store.

Listen to the The Mask of Zorro soundtrack on Apple Music.

The Mask of Zorro images are © TriStar Pictures. All Rights Reserved.

The Mask of Zorro Review 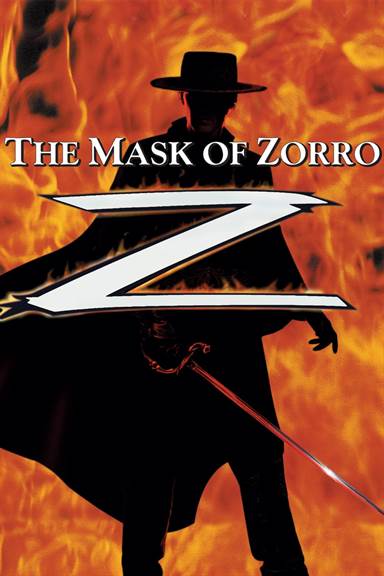 In 1919 pulp magazine writer Johnston McCulley created a fictitious character named Zorro.  The vigilante became a hero of the Spanish people living in the Mexican province of California. With his classic black costume, cape, sombrero cordobas and his signature mask he was a dashing and skillful fighter.  He was mysterious and seemingly untouchable and became so popular that Douglas Fairbanks portrayed him in the 1920 film, The Mark of Zorro.  Over the years there have been many actors who portrayed Zorro in numerous movies and television shows and in 19998 Antonio Banderas (Once Upon a Time in Mexico) became the latest in The Mask of Zorro.

Alejandro Murrieta (Banderas) and his brother grew up idolizing Zorro (Sir Anthony Hopkins; The Silence of the Lambs) but grew up to become criminals.  Meanwhile, Zorro spent years in jail after Don Rafael Montero (Stuart Wilson; Lethal Weapon 3) accidentally killed Zorro's wife and stole his daughter.  When Murrieta's brother is caught and killed, he takes the medallion Zorro gave his brother, which is where Zorro finds it.  Once Zorro sobers Murrieta up, he trains him to become the next Zorro.  Along the way, the two learn of Montero's plans for California and, not only decide to stop him but to tell Montero's daughter, Elena (Catherine Zeta-Jones; Entrapment), who her real father is – spoiler alert…it's Zorro.

There are several reasons why The Mask of Zorro was so successful, beginning with the cast.  Hopkins, Banderas, Wilson, and Zeta-Jones all bring excellent performances to their respective roles.  If I had one complaint about casting it is that Hopkins has an English, not Spanish, accent and that irregularity is never explained in the film.  However, the chemistry between Banderas and Zeta-Jones is electric and jumps off the screen at you.

Other reasons the movie works is because of the well-written script and the excellent direction of Martin Campbell (GoldenEye).   His action sequences including acrobatics, sword fights (obviously), guns, and various horse-riding tricks which make for unique scenes and interesting fights.  Of course, one of the best scenes isn't a fight at all but the sizzling dance between Murrieta and Elena.  As mentioned previously, their chemistry is powerful and this dance plus their fight scene in the barn are two of the most memorable in the entire movie.

The 2160p high definition resolution is hit or miss.  While colors pop and details can be ascertained with the naked eye (especially where the costumes are concerned), the 4K video highlights the flaws that weren't visible before.  These include many of the horse riding scenes and some of the backgrounds of sunsets and the Mexican landscapes.  The Dolby master audio 5.1 is sharp and clean and there seems to be a nice balance between the volume of dialogue and the ambient sounds/soundtrack/special effects.  The extras include Never-Before-Seen Deleted Scenes and Theatrical Trailers, Director Commentary, and a 45-minute "Unmasking Zorro" Documentary.  Most of this material is fluff but the documentary offers some interesting information.

While there have been numerous adaptations of the Zorro story, The Mask of Zorro is certainly one of the better films available.  It blends the right amount of action and romance with hints of comedy peppered throughout which makes it enjoyable to watch more than once.  A well-written script, great acting, and good (if rather unrealistic) action scenes give this film the punch it needs to make it a new classic.

Since we are all pretty much stuck at home, why not remind yourself what it was you liked about The Mask of Zorro during its original release twenty two years ago or better yet make it a family night and introduce it to your teenagers as well.