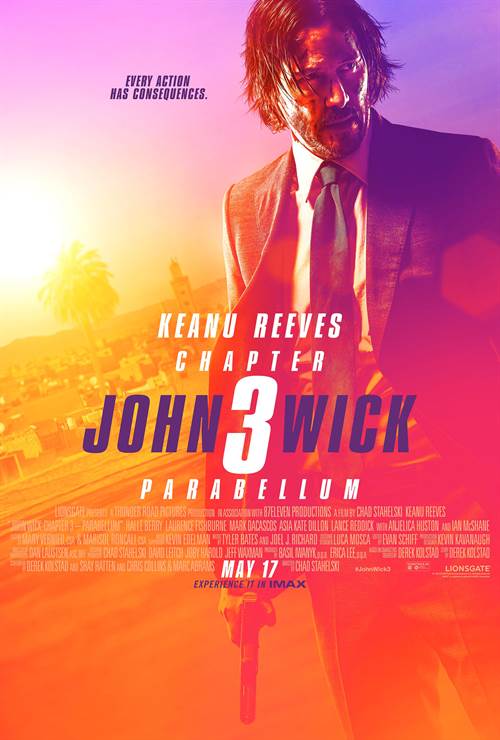 In this third installment of the adrenaline-fueled action franchise, super-assassin John Wick (Keanu Reeves) returns with a $14 million price tag on his head and an army of bounty-hunting killers on his trail. After killing a member of the shadowy international assassin’s guild, the High Table, John Wick is excommunicado, but the world’s most ruthless hit men and women await his every turn.


John Wick's Favorite Hobby Revealed by Keanu Reeves  5/10/2019 2:33 PM EST
Ever wonder what an assassin enjoys doing in his off time? Well, as for John wick, his hobby was originally supposed to be in the first film but was ultimately cut. Reeves was recently interviewed by Uproxx and revealed what that hobby was."In the first script, they had John Wick described as working with old leather-bound books and book restoration. We filmed it. It's not in the movie, but we fil...  More>> 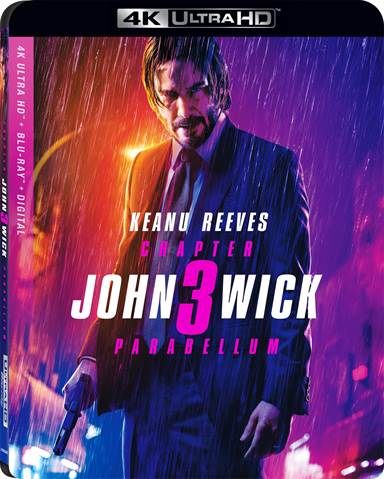 In 2014, we were introduced to John Wick, played by Keanu Reeves (The Matrix). Originally, Wick was a former hitman trying to live a more normal life but after his wife died and her last gift to him, a dog, was killed by some Russian mobsters, all bets were off. Wick returns to the life he knows best - the life he excels at to get revenge. The film went on to spawn a sequel, John Wick: Chapter 2, in 2017 and this year we saw the third installment, John Wick: Chapter 3 – Parabellum, released in May. Now, this title is available on 4K Blu-ray for your home entertainment collection.

The third film picks up right after the second one ended. John Wick is now on the run, being labeled "excommunicado" after killing a member of the High Table,  Santino D'Antonio, in the New York City Continental. He enlists the help of the Director (Anjelica Huston; The Addams Family) to ensure safe passage to Casablanca, Morocco, where he meets up with a longtime friend, Sofia (Halle Berry; Monster's Ball). Using his marker, he asks that Sofia brings him to the Elder, the only person who is above the High Table. She points Wick in the right direction and after collapsing in the desert, he is brought to the Elder where he asks for forgiveness. The Elder agrees, but only if Wick agrees to work for the High Table for the rest of his life and also kill Winston (Ian McShane; American Gods).

I find these films endlessly entertaining and would be happy if they made a dozen more. Reeves plays the part of Wick well, falling into the persona quite easily. The action is non-stop in these films and it's always impressive to see Reeves show how all his real-life training for these films paid off. Ian McShane is always a favorite, playing the ever-cool and sophisticated Winston. Laurence Fishburn (The Matrix) returns as the Bowery King, giving a great performance, as usual. Halle Berry's performance was pretty much run of the mill for her but good, just the same.

The 4K HDR: Dolby Vision is its own character.  The blacks are deep and rich and the details are incredibly sharp down to the rain falling as John Wick is on the run. The Dolby Atmos Audio is an excellent complement to the visuals as every gunshot can be heard with crystal clear quality. These technical aspects only enhance the viewing pleasure for the audience.

Special features for this title include:

Personally, I am really looking forward the to the fourth John Wick film in the franchise, and can only hope that it will live up to the three that have already been released. It's a non-stop ride from the moment the film begins and keeps you on the edge of your seat the entire time. This is simply a character I won't tire of. Do yourself a favor and grab this 4K Blu-ray and if you don't own the previous two, throw those in while you're at it! You won't be sorry.