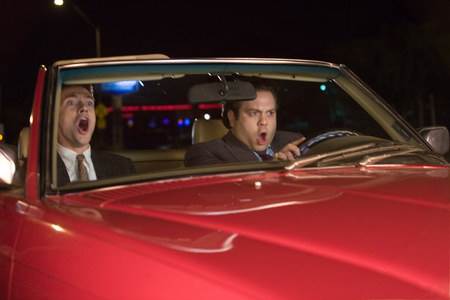 As the summer of 1988 winds down, three friends on the verge of adulthood attend an out-of-control party in celebration of their last night of unbridled youth. Starring Topher Grace, Anna Faris, Dan Fogler and Teresa Palmer, Take Me Home Tonight is a raunchy, romantic and ultimately touching blast from the past set to an awesome soundtrack of timeless rock and hip-hop hits.

Recent MIT grad Matt Franklin (Topher Grace) should be working for a Fortune 500 company and starting his upward climb to full-fledged yuppie-hood. Instead, the directionless 23-year-old confounds family and friends by taking a part-time job behind the counter of a video store at the Sherman Oaks Galleria.

But Matt’s silent protest against maturity comes to a screeching halt once his unrequited high school crush, Tori Frederking (Teresa Palmer), walks into the store. When she invites him to an epic, end-of-summer party, Matt thinks he finally might have a chance with the girl of his dreams. With his cynical twin sister Wendy (Anna Faris) and best friend Barry (Dan Fogler), Matt embarks on a once-in-a-lifetime evening. From stealing a car to a marriage proposal to an indescribable, no-holds-barred dance-off, these friends share experiences that will change the course of their lives on one unforgettable night in the Go-Go ’80s.

Download Take Me Home Tonight in Digital HD/4K from the iTunes store.

Listen to the Take Me Home Tonight soundtrack on Apple Music. 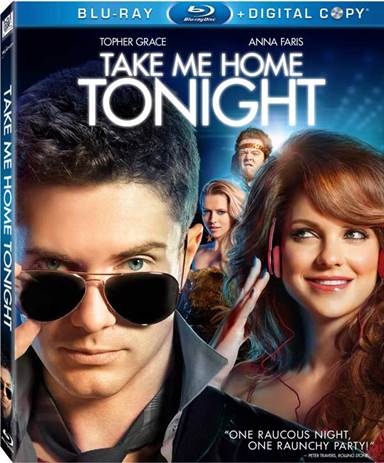 The digital transfer to Blu-Ray was amazing for reliving the amalgam of 1980s music that plays throughout the film.  Unfortunately the video quality was enough that you could see the grain from the original film which was, at times, distracting.

The film, set in 1998, revolves around Matt Franklin (played by Topher Grace "That 70s Show"), a recent MIT grad who is working at a Suncoast Video while deciding what to do with his life.  One day, his high school crush walks in (played by Teresa Palmer "The Sorcerer's Apprentice"), and he decides to try and talk to her.  The rest of the movie is what happens after that.  At the same time the movie tries to have subplots revolving around Matt's friend Barry and his twin sister Wendy.

The movie has a cute premise with lots of potential, starts strong, and sputters throughout with a strong ending, but the ending isn't enough to bring the rest of the movie with it.  The two other subplots take time away from the main premise of the movie and distract you with what seems to be unnecessary issues.  Now if this movie was supposed to be a veiled remake of The Breakfast Club, it could have succeeded with a few of the deleted scenes being restored and closure on the subplots - the latter which was completely missing. I'd recommend that you watch the deleted scenes and put them in perspective; you'll probably agree with me on that.

The best special feature on the disc is the "Take Me Home Tonight" music video, which is not a music video for the song "Take Me Home Tonight", which doesn't even appear in the movie.  In fact, the only time you'll hear it on the disc is while you are sitting on the menu.  The music video was done as a promo for the film, with the song "Don't You Want Me" peformed by Atomic Tom.  At the same time, the stars of the movie reenact about 5 seconds of around 40 different 80s movies using what appears to be common household objects, such as vacuum cleaners as the proton packs from Ghostbusters.  The best one however, is their recreation of The Terminator, as Michael Biehn (who plays Matt's father in the film) plays, well, himself, in the 80s reenactment.

If you are in to 1980s nostalgia, then perhaps you should give this movie a cursory viewing, if only to relive the music alone.