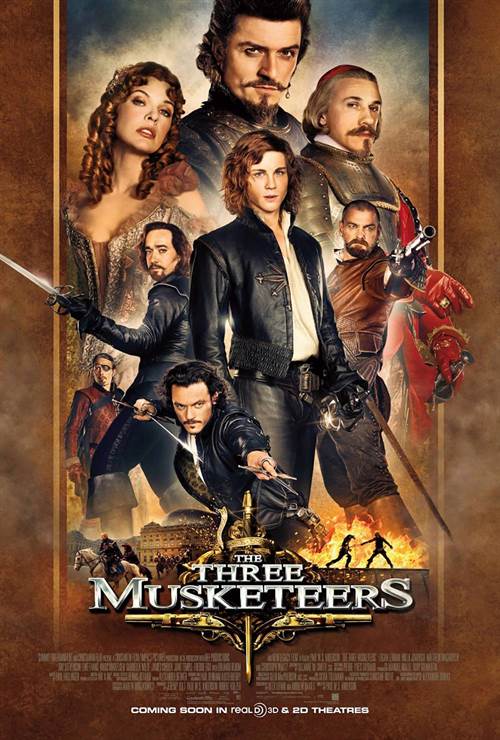 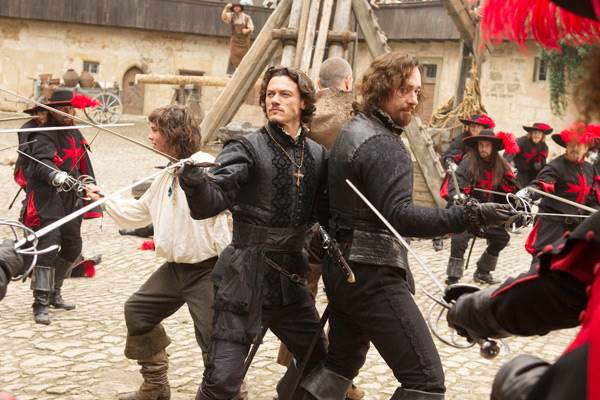 The young hero D’Artagnan (Logan Lerman) and three of France’s most elite warriors battle their way across Europe to save king and country from a conspiracy led by deadly assassin Milady (Milla Jovovich) and the Duke of Buckingham (Orlando Bloom). A modern update to Alexandre Dumas' classic story,

Download The Three Musketeers in Digital HD/4K from the iTunes store. 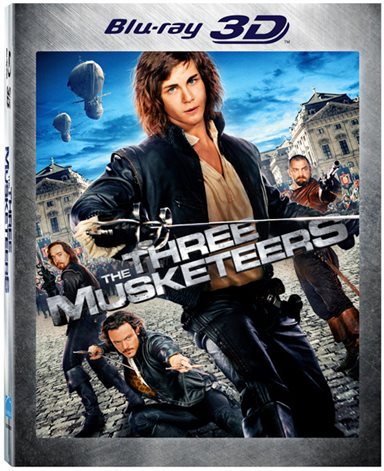 In this updated 3D version of Alexandre Dumas's original story, The Three Musketeers finds the famous trio trying to fight for justice but instead failing their mission and getting caught up in a world of deception, vengeance and loss. That's when things change for our great trio: the young & ambitious D'Artagnan, who longs to become a Musketeer, arrives and brings back the excitement and drive to the Three Musketeers to save their king and country from going to war. Director Paul W.S. Anderson (Resident Evil) brings to life a very vivid depiction of this often-adapted story. Filming in Bavaria, Germany provided Anderson a beautiful backdrop; he captures the Italian and French architecture and design, so that you really get a true glimpse of what it was like during this time. He does bring lots of great swashbuckling fight scenes, beautiful and detailed sets and costumes. However, he loses his momentum by straying away from the classic feel and tone of what you would normally expect to see in a Three Musketeers movie. By adding some inauthentic high tech additions to the setting, Anderson tries to up the "cool" factor but it just doesn't work. "The Heroes" include the amazing trio with great chemistry who give a wonderful performance with great sword fighting. The leader is Athos, (Matthew MacFadyen, Pride and Prejudice) who is a great swordsman, good friend and a strong leader. He gets betrayed by his love, who is a ruthless double agent, and finds himself fighting to make up for his failing his mission and falling for the wrong woman. Matthew MacFadyen gives a outstanding performance and makes a fine swordsman. The second Musketeer is Porthos (Ray Stevenson, Thor), the tallest and largest of the three. He is very pompous, loyal, vain, and fond of drink. He is definitely a strong opponent and is always dressed the best. He can come off as a brute but really has a kind heart. The third Musketeer is Aramis (Luke Evans, Immortals), a very complex character. Aramis is a very religious man who seeks the priesthood, but is also a great swordsman and loves the ladies. All of these qualities make this character interesting to watch. The fourth Musketeer in training is D'Artagnan (Logan Lerman, Percy Jackson & the Olympians: The Lightning Thief), an eager young man who is longing to join the elite Musketeers. His character is very ambitious, motivated to do the right thing, consistently showing bravery and confidence. His ego is big, but he learns that working as a team is much more rewarding. His great enthusiasm is what brings the Musketeers back together again to fight for the king. King Louis XIII (Freddie Fox, St. Trinian's II: The Legend of Fritton's Gold) is a very young and immature king who is more concerned about the color of his clothes than ruling France. He loves and admires his loyal band of Musketeers, who are charged with protecting him, but he is not a strong man and is easily coerced by his evil counsel Cardinal Richelieu (Christoph Waltz, Water for Elephants). The Queen (Juno Temple, Year One) is in love with her husband, King Louis XIII and will do anything to make him happy and fights for the Musketeers to protect her king. The Villains include Richelieu, who works with a double agent to betray the king and his country, to attain the power to rule. He doesn't want the Musketeers to protect the king and has them disbanded. Waltz plays this character quite smoothly. Milady de Winter (Milla Jovovich, Resident Evil: Afterlife), is Athos's love, a ruthless double agent and the catalyst for all the deception. Jovovich puts forth a great performance with her fight scenes, rappelling and otherwise moving acrobatically all while in a tightly fitted corset. Her strong female presence really comes through in this film that is mostly men. The Duke of Buckingham (Orlando Bloom, Pirates of the Caribbean: Dead Man's Chest, The Lord of The Rings) is involved with and working with Milady de Winter. Both are trying to deceive and start a war with King Louis XIII by plotting against him. Orlando Bloom's performance is very good. From his outrageous costumes, rock and roll hairstyle, to his bad boy style, he leaves you wanting more. Comte de Rochefort (Mads Mikkelsen, Clash of the Titans) is the arrogant chief guard of Cardinal Richelieu. He plays a rugged thug who is insulted by D'Artagnan and tries to kill him. Mikkelsen does a awesome job playing this arrogant bully and displays some great swordsmanship. This Blu-ray comes in High Definition with two discs to choose from. One is the Blu-ray and the other is 3D Blu-ray. The 3D Blu-ray offers some great scenes for the viewer; the fighting sequences and explosions really jump out at you. The beautiful architecture, costumes, and landscape burst onto the screen. The Special Features section offers many options for the Three Musketeers fans. You can choose the "Access Three Musketeers" feature, which allows you to watch the movie and have access to the cast and the crew stories as well as insider information about the making of the film. There are also four other featurettes to watch, and option for audio commentary with filmmakers. There are also some exciting extended and deleted scenes. This film was entertaining, with a great cast, beautiful costumes, exciting fighting scenes. However, it lacked the authentic feeling of past Three Musketeers films. By adding certain high tech out-of-place details, director Anderson made it more like a great video in some parts