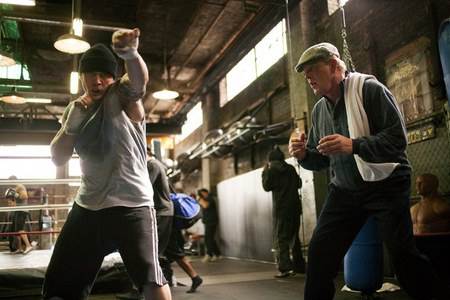 Two brothers face the fight of a lifetime – and the wreckage of their broken family – within the brutal, high-stakes world of Mixed Martial Arts (MMA) fighting in Lionsgate's action/drama, Warrior.

An ex-Marine haunted by a tragic past, Tommy Riordan returns to his hometown of Pittsburgh and enlists his father, a recovered alcoholic and his former coach, to train him for an MMA tournament awarding the biggest purse in the history of the sport. As Tommy blazes a violent path towards the title prize, his brother, Brendan, a former MMA fighter unable to make ends meet as a public school teacher, returns to the amateur ring to provide for his family. Even though years have passed, recriminations and past betrayals keep Brendan bitterly estranged from both Tommy and his father.

But when Brendan's unlikely rise as an underdog sets him on a collision course with Tommy, the two brothers must finally confront the forces that tore them apart, all the while waging the most intense, winner-takes-all battle of their lives.

Download Warrior in Digital HD/4K from the iTunes store. 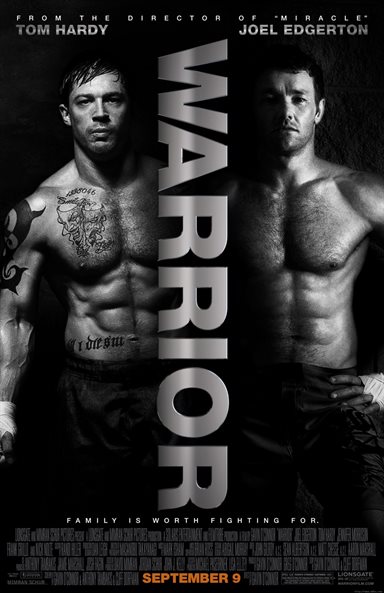 I watched befuddled, backtracking Paddy Conlon (Nick Nolte, 48 Hrs, Mother Night) working desperately, unselfconsciously to insinuate himself back into his son's life. As he stood on son Brendan's (Joel Edgerton, Star Wars Episode III, Legend of the Guardians) lawn, I decided that he was pathetic and degenerate, even gloriously so. Of course, I could no longer count on Brendan and brother Tom (Tom Hardy, Sucker Punch, Inception) to bring the dramatic goods in this occasionally subversive yet largely formulaic fight film, Warrior.
For I was not to know it yet, but soon we would be venturing into montage territory. Montage! A real-life sports training montage. Is it not yet too soon to be so on-the-nose with our resurrection of the ancient practices of the inspirational boxing movie, albeit "adapted" for modern audiences through the medium of Mixed Martial Arts? Perhaps not, according to the extensive reliance on fictional sportscasting-as-storytelling-conduit as the film drew to a close.
Though Hardy and Edgerton might have let us down, the excellent supporting cast picked up the slack. I have already mentioned Nolte. Additionally, Tess Conlon (Jennifer Morrison, House M.D.) treated us to her particularly sweet flavor of biting sarcasm as Brendan's wife and well-placed backstory device, and Joe Zito (Kevin Dunn, Transformers: Dark of the Moon) to a sympathetic but honest school principal. Frank Grillo (as Frank Campana) deserves special note for the well-established relationship he presented with Brendan beginning with his first appearance, though of course Edgerton shares in this praise.
I noted Campana and Brendan's relationship especially because there was too much easily recognized as "of the formula" throughout Warrior, so any deviation from that made me sit up and take note. You see, Tom is a pill-popping drifter, while Brendan plays the good dad and simple teacher. Tom needs money to help out his dead comrade's widow, while Brendan needs money to save his family's home. We're all basically good  people, and we've all got problems of different sorts. Have you seen this? Could you believe they're going to have an ultimate confrontation?
The exploitation of cliche did some favors to the material. The "victory" closing the film was a fine subversion of the form, and an epilogue act would only have served to disappoint. But there is one other guest appearance deserving special praise: the elegantly kitschy appearance of professional wrestler Kurt Angle as an MMA fighter. Coming out draped in red, to entrance music in stark contrast to our heroes', hammer and sickle on his flags and other assorted paraphernalia. It made you laugh in a good way. With Warrior, it seems, the Old Enemy is back from his decades-long absence.