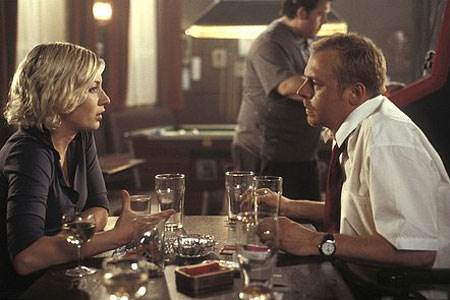 Shaun isn't having the greatest of times: the staff at the appliance store he works in doesn't take him very seriously as temporary boss; his girlfriend Liz has had enough of always meeting at the Winchester Arms along with his best mate; and his relationship with his dad--sorry, stepdad--remains heavily fraught. And now the living dead have risen and are spreading their zombie curse to everyone into which they can get their teeth. Just doesn't seem worth getting out of bed some days.

Purchase DVD/Blu-ray/4K UHD physical copy of Shaun of The Dead today at Amazon.com

Download Shaun of The Dead in Digital HD/4K from the iTunes store.

Shaun of The Dead images are © Rogue Pictures. All Rights Reserved.

Shaun of The Dead Theatrical Review 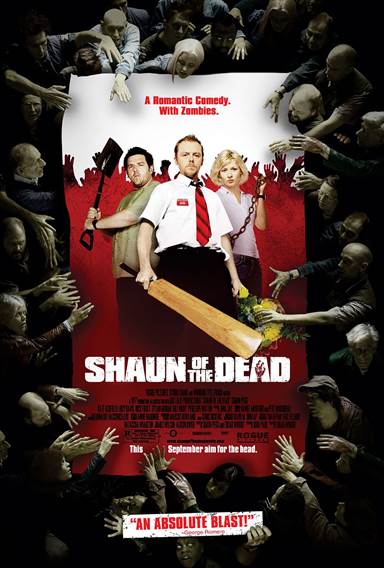 Shaun, which was released at the same time as the remake of Dawn of the Dead was billed as "A romantic comedy ... with zombies" (proclaiming itself with the cringe inducing 'rom zom com' descriptor). This (even without the three-letter version) is possibly one of the worst taglines of all time. Having to choose between Dawn, and a British comedy wherein I didn't know the principals (from British TV sitcom Spaced) I chose Dawn--which was more depressing ... but not by all that much.

Having been released in 2004, we're well past the spoiler date--so here goes.

In case you don't know, the movie is about a slacker 29-year old electronic salesman (Shaun), his layabout slob of a roommate Ed (Nick Frost) and his ex-girlfriend Liz (Kate Ashfield). And the uprising of the dead.

The ultimate insurgency force, the dead, when re-activated world wide form the basis for a whole lot of movies--none of them especially romantic. Shaun has the zompocalypse set the backdrop for Shaun trying to reconcile with Liz after he has blown her off for the last time and she has broken up with him. He 'rescues' her, bringing her, her two annoying friends, and Ed ... and his mother, on an ill-conceived journey to ... his favorite pub.

His favorite pub would be a good place to hole up except that one of the guys breaks a window to get in when they are surrounded by zombies (Shaun then leads the zombies away by calling out to them--allowing them to enter and then returning through the back door). Inevitably, when things get tense, there is a containment breach and the pub is flooded with zombies.

Most everyone gets eaten (mom, the two annoying friends--although one improbably survives in a deleted scene), and even Ed--the best buddy. As zombies maintain some of their old habits, though, Ed can be found at the end of the movie in the rear garden shed eternally playing TimeSplitters 2. It's bitter sweet since Liz has decided that Shaun has it in him to be a hero after all and they've gotten back together (the world is restored by the British Army).

Shaun is clever. Shaun is funny (in a British, understated kind of way). If I have any problem with Shaun it is that it's an awfully dark comedy (perhaps befitting the "romantic" tone) that, I don't think, quite pays for itself in the end. I don't think the cute end-scene quite makes up for the scene of Shaun having to shoot his slightly loopy but well-meaning mother. I don't get that Ed, out in the shack, is still the same best-buddy he always was--just now in his perfect element. It seems more like denial on Shaun's part to me.

Mostly, though, with all the incredulous looks of friends and family who couldn't believe I hadn't seen it, I was expecting something more. But let's look at what I did and didn't like.

1. I like the way everyone apologizes before they die and zombie-out. When Dianne (one of the less-than-likable friends) tries to instruct the crew on how to "act like a zombie" so they can infiltrate and pass the massive zombie-herd to get to the bar she says they are to look vacant and sad. I like the idea that before dying everyone bitten is overwhelmed with sadness and, in fact, become creatures of ambulatory sadness (and vicious biting). That's not in the movie exactly--but I like it anyway.

2. I like Simon Pegg as Shaun. I thought Liz was wrong for him. There's another character, Yvonne, a girl he runs into a few times, who is later seen leading exact analogues of Shaun's team of survivors to another safe-house (none of the others make it either). Although she is the Shaun analogue, I thought she might make a better girl-for-him-to-wind-up-with than the somewhat annoying Liz. But mostly I liked the fact that there were two teams of nearly identical people running around.

3. In Poe's The Narrative of Arthur Gordon Pym of Nantucket the main character has stowed aboard a whaling ship that hits rough times. So rough, in fact, that the main character is reduced to cannibalism in order to survive. But then the bodies run out ... and he gets really hungry--and he breaks into a lower deck with a lot more food. Apparently his threshold for cannibalism wasn't all that high to begin with. In Shaun there's a scene like that where, surrounded by zombies, they reveal the existence of a basement. This would've been a fine place to hide out from the start.

4. I liked the homage ("Rumors that the zombies were caused by infected monkeys have been disproven!") and I liked the wrapup with zombies being used for menial labor (which, you know, will sometimes bite you in the best of circumstances).

5. I liked the British army saving the day--for dues ex machina, nothing beats a bunch of brits with big ass guns on full auto. I think it says something about the trust we have in our governments and armies that we, time and again (in zombie movies) often expect the army to prevail. Yes, they don't always--but at the end of Night the national guard was abusing zombies. In the utterly apocalyptic Day the army was "all that was left" (but not so--we saw Land which had humanity doing maybe overly well). I think that as the final wall between civilization and chaos it's kinda cool that as often as not, against this particular monster, weapons and discipline often win.

6. I like the running gags ("You've got red on you" and "How are you doing?" "Surviving"--which has several different meanings throughout the film). The structure of the movie is pretty well made, avoiding the Zombie-film mushy middle by simply having non-stop action (the British army cleans up the place in under 48 hours).

This brings us to my major complaint:

7. If everyone had just stayed where they were, probably more of them would've lived. The zombie hoards were really bad at breaking through glass (unless there was a lot of noise and light inside). Now, as a comedy (even a rom-zom-com), I have to forgive it for this sort of conceit. The movie tells us Shaun is a hero and, in fact, so he must be. After all, he swings a cricket bat like a hero. He goes to get his girl like a hero. He even shoots his mum like a hero (the sniveling pacifist who first wants to shoot mum has the right idea for the wrong reasons--he's always on the wrong side ... and is eventually on the wrong side of the bar near the broken glass).

But it's tough: getting the romantic comedy bit means I have to connect with the characters (my hope, it turned out, was that Shaun would wind up with someone else--so maybe I was disappointed in the two main character's eventual reconciliation). It's hard to do that when the context is that Shaun is terribly endangering her for his own ends (to get back in her pants or at least her life).

Still, who am I to quibble: Shaun of the Dead was named the 49th greatest British film of all time by the magazine Total Film. That's a stronger recommendation that I could possibly give it! Isn't it?